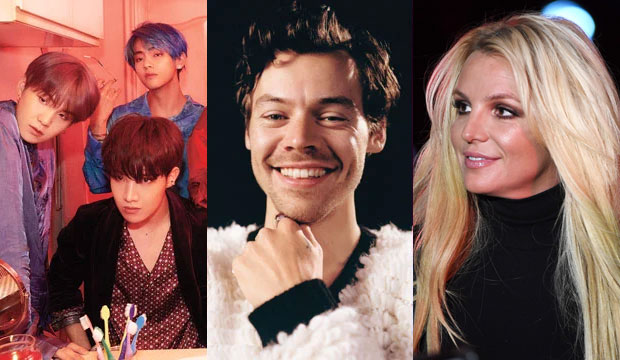 The pop field at the Grammys is usually one of the most star-studded every year. This year some of the categories seem especially crowded, so let’s take a quick look at who the main contenders are.

For Best Pop Solo Performance, a lot of big names are in contention. The biggest commercially are two Brits who are also past category winners: Harry Styles’s “As It Was,” which has topped the Hot 100 for 13 weeks as of this writing, and Adele’s “Easy On Me,” which topped the chart for 10 weeks. They will likely be joined by another category winner with a number-one hit: Lizzo, whose “About Damn Time” is easily one of the most memorable moments in pop music this season. Finally, there’s Beyoncé, who will likely be nominated for her two-week number-one hit “Break My Soul.” If there was anything like a lock at the Grammys, it would probably be these four.

But what about that last slot? It could go in multiple directions. They could go for previous nominees in this category, given that familiarity often helps. Lady Gaga’s “Hold My Hand” was a medium-sized hit for the artist and could be helped by Gaga’s pop darling status, as well as the popularity of “Top Gun: Maverick,” for which she wrote that song. There’s also Ed Sheeran, who has won this category two times and could net a nomination for his top-10 hit “Shivers.” Sheeran and Gaga both missed this category the last time they submitted hits — “Bad Habits” and “Stupid Love,” respectively — but the competition this year is arguably weaker. Another past nominee who has been a bit inconsistent is Taylor Swift, whose “Willow” missed last year. However, the release of her new album “Midnights” could help its lead single (if she releases it by the September 30 eligibility deadline), or even “All Too Well (Taylor’s Version)” if she decides to submit it. Finally, there’s Billie Eilish’s “TV,” which wasn’t a big hit like her previously nominated songs, but could still make the cut due to the love voters clearly have for Eilish.

However, voters could go for new artists as well. Dove Cameron’s “Boyfriend” was a big pop radio hit that could be stuck in voters’ heads. The same can be said for Em Beihold’s “Numb Little Bug,” which had a meteoric rise on the format. There’s also Joji, who netted his first top-10 hit with “Glimpse of Us”, a ballad that is definitely Grammy-appealing. Last year’s Best New Artist nominee The Kid LAROI could also have a shot for his hit, “Thousand Miles.” Finally, there’s Gayle, whose “ABCDEFU” was one of the biggest hits of early 2022.

A couple of songs that could potentially be submitted here are late album singles “Ghost” by Justin Bieber, “Woman” by Doja Cat, and “That’s What I Want” by Lil Nas X, as well as Bad Bunny’s “Moscow Mule” and Steve Lacy’s “Bad Habit.” If they are on the ballot, all of them have a good chance at a possible nom.

SEEBritney Spears warns she may never perform in public again

Moving on to the Best Pop Duo/Group Performance category, there are a couple of easy front-runners. Coldplay and BTS’ “My Universe” is a very likely nominee due to both artists being consistent nominees in this category, not to mention the song’s chart-topping success. Similarly, Imagine Dragons and JID’s “Enemy” is also a safe bet here and a possible winner. Bad Bunny and Chencho Corleone’s “Me Porto Bonito” is one of the most successful eligible songs here and could ride a wave of Bad Bunny support to a nom. Past nominees Post Malone and Doja Cat could also net a nomination for their top-10 smash “I Like You (A Happier Song).” A huge hit this year was “Encanto’s” breakout song “We Don’t Talk About Bruno,” which could get a nomination despite having mostly faded since the first quarter of the year (and being a children’s song). Also keep an eye out for “Hold Me Closer,” the new duet between Elton John and Britney Spears, which is both a top-10 hit and Spears’s return to music after the end of her controversial conservatorship.

Outside the top-10 hits, there are a few more contenders. Beyoncé is a pop field favorite, so watch out for her submitting either “Move” (featuring Grace Jones and Tems) or “Energy” (featuring Beam) to the category. There are also Camila Cabello and Ed Sheeran, who could be in contention for their hit “Bam Bam.” Another big-name collaboration was Dua Lipa and Megan Thee Stallion’s “Sweetest Pie,” which could be recognized, especially considering that Lipa is so popular she managed a surprise Pop Album win for “Future Nostalgia” in 2021. Previous nominees here Charlie Puth and Jungkook (of BTS) could get a nomination for their hit “Left and Right,” which is rising on the charts right now. Finally, there’s The Anxiety with their viral hit, “Meet Me At Our Spot.”

Additional songs that could be submitted here are Brandi Carlile and Lucius’s “You And Me On The Rock”, Elton John and Dua Lipa’s “Cold Heart”, and Ed Sheeran and Lil Baby’s “2Step.”