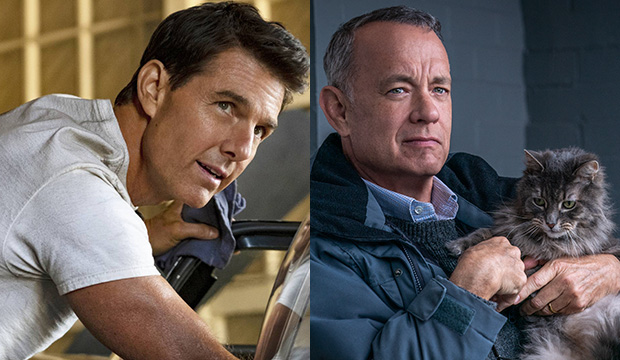 Welcome to Oscar Experts Typing, a weekly column in which Gold Derby editors and Experts Joyce Eng and Christopher Rosen discuss the Oscar race — via Slack, of course. This week, as “The Whale” hits theaters, we reexamine Best Actor.

Christopher Rosen: Hello, Joyce! We’re back at it again with our fingers ready to type about what seems like one of the most competitive acting categories of the year, even if Film Twitter doesn’t want to admit that’s the case. I’m typing, of course, about Best Actor, where Brendan Fraser has been the online pick of choice for months thanks to his performance in “The Whale.” But while Fraser has some compelling narrative juice as both a comeback performer and former beloved star of ’90s comfort food movies, neither one of us are convinced he’ll be the last man standing here. But maybe that’s putting the cart before the horse. This is one of my favorite categories to predict because there are seemingly three obvious locks – Fraser, New York Film Critics Circle and National Board of Review winner Colin Farrell for “The Banshees of Inisherin” and Austin Butler for “Elvis” — and then a whole lot of dart throws. I’ve got Bill Nighy for “Living” and Mr. Tom Cruise for “Top Gun: Maverick” rounding out my five. But I’m not really convinced either will make the cut and I’ve toyed in recent days with putting in Tom Hanks for “A Man Called Otto,” Gabriel LaBelle for “The Fabelmans,” Paul Mescal for “Aftersun,” and even W*ll Smith for “Emancipation” (I know). But maybe that’s the reason I keep it locked in on Nighy and Cruise: there aren’t really a lot of options that feel any stronger than those two men, and each of those nominations — while deserved — also feel like lifetime achievement honors to boot. If I had to pick an alternate now, it would be Hanks. “A Man Called Otto” — an American adaptation of “A Man Called Ove,” the best-selling Swedish novel that was turned into an Oscar-nominated feature — is down-the-middle Oscar stuff, and if this were 10 years ago, I’d probably have it in my Best Picture lineup. Hanks is great, kind of doing a grumpy Clint Eastwood bit but with the Hanks heart of gold and the comic timing of his ‘90s run. The academy has often ignored iconic latter-day Hanks performances — I’m still waiting for his nominations for “Captain Phillips” and “Bridge of Spies” — but in a fluid year without many options, what if he gets in? Joyce, talk me out of this and then tell us what to make of the top three candidates — is Fraser the George king of the jungle?

joyceeng: Remember when Hanks was in play for double noms for “Captain Phillips” and “Saving Mr. Banks” and was doubly snubbed? That might happen again, except he’s not widely expected (yet) to get in for either “A Man Called Otto” or “Elvis,” though you and I both have him getting shortlisted for the latter elsewhere. It’s also funny that he couldn’t even win at the Australian Academy of Cinema and Television Arts Awards, aka the Aussie Oscars, when “Elvis” swept. Anyway, I have the same Best Actor five as you do. Nighy isn’t safe like the top three, but with a dearth of options, he should be OK. He’s also got Hugh Jackman, his direct Sony Pictures Classics competition, stumping for him now. Is this a backwards way of campaigning for “The Son”? Imagine telling someone 11 months ago that people will be seriously predicting Tom Cruise for a Best Actor nomination for “Top Gun: Maverick.” But here we are. I have him in because he, on paper, has the fewest shortcomings of the fringe contenders. Hanks has the better Oscar résumé, but he’s had so much trouble scoring nominations this century that I can’t be confident in him as a filler nominee for a late movie. As for Cruise’s “Mummy” predecessor, we discussed Fraser’s standing the other day. So far he has not been “performing” like a runaway sweeper: Volpi Cup loss to Farrell, Gotham loss to Danielle Deadwyler, Independent Spirit Award snub. And while he was not expected to win NYFCC, an NBR win was on the table, considering that group’s tastes, but it went with Farrell as well. Fraser can definitely turn things around with the televised awards (of course, he’s not attending the Golden Globes, so there will be no speech if he wins). But this category is also the most connected to Best Picture, and with the polarizing reception to “The Whale” — in theaters now! — that might hold him back in the end. Then again, the industry could just bawl their eyes out over “The Whale” like they did “CODA,” so who knows. You basically talked to everyone from “The Whale” this week, so I am shocked that you have not moved it into more categories. Where is Chris and what have you done to him?

Christopher Rosen: Lol, Joyce, this is the new me! But actually I have Fraser and Hong Chau in and you know I want to predict Queen Sadie Sink too. But I agree that the movie itself might be the biggest hurdle to a Fraseraissance. That is why I’ve ultimately stuck with Butler. You know what movie people love? “Elvis.” I think it could be an eight- or nine-time nominee this year, so much so that if Baz Luhrmann landed among the Best Director nominees, I wouldn’t be shocked. (Is “Elvis” this year’s “Joker”?) So in the end, Butler feels like the choice — especially because recent Oscar history shows the value the academy places on real-life transformations. Butler is also ~ doing the work ~ and while he’s not at the Eddie Redmayne level of campaigning yet, the season is still young. I know you have Butler in first too, but my gut tells me you want to see Farrell pull off the win. Can you imagine a scenario where he does?

joyceeng: You know Farrell is my personal favorite — I still can’t get that one line reading (you know the one) out of my head and I cannot wait to repeatedly watch the scene when “Banshees” hits HBO Max on Tuesday — but I also don’t like to hopedict my faves, especially when there’s not a ton of data yet. Right now, between Farrell and Butler, I’d give the edge to the latter, but Farrell can take the Olivia Colman route of Volpi Cup, comedy Globe and BAFTA to Oscar gold. But if Butler makes it in at BAFTA (he doesn’t exactly serve “jury pick”), I would not be surprised if he won that too since the Brits are bigger Baz fans than the academy is (#neverforget when he won Best Director for the iconic “Romeo + Juliet,” beating King of the World James Cameron). Circling back to Cruise, here’s a thought I was recently discussing with someone: what if he’s actually in fourth?

SEE Oscar Experts Typing: Who will round out the Best Actress final 5?

Christopher Rosen: I am not going to argue with that. We’ve all seemingly had Nighy in there because he’s a beloved actor making what is maybe a final run at academy glory in a movie released by Oscar factory Sony Pictures Classics. But despite my love and tears, “Living” hasn’t exactly caught fire — like “Otto,” it’s easy to imagine it would’ve landed five or six nominations plus Best Picture were this the ’90s. It’s possible Nighy would be the film’s lone nominee — which probably places him in the Mescal or Jeremy Pope range of long shot despite appearances otherwise. So basically what I’m saying is that if/when I pivot to Hanks, it’ll be Maverick who stays in flight and not Nighy. But I’ll leave you with the last word here: Nighy or Cruise?

joyceeng: I gotta say that, at this second, I would pick Cruise. “Living” is indeed very quiet right now and, yes, we’re all just assuming SPC will work its behind-the-scenes ninja magic on voters like it usually does. I guess utilizing Jackman is part of that? This is truly one of the weirdest Best Actor races, so until Globe nominations on Monday, I’ll remain in my Nighy-Cruise holding pattern.

PREDICTthe 2023 Oscar nominees by Jan. 24
Oscar odds for Best Actor
Who will win?