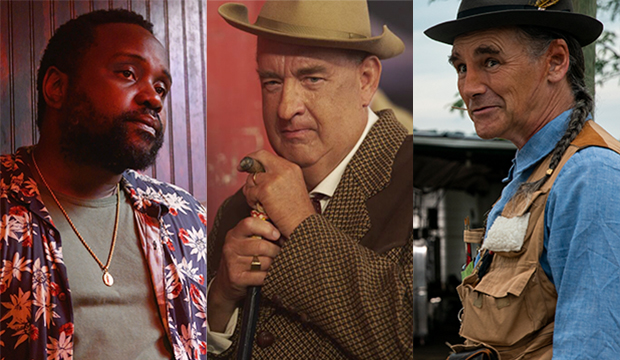 Welcome to Oscar Experts Typing, a weekly column in which Gold Derby editors and Experts Joyce Eng and Christopher Rosen discuss the Oscar race — via Slack, of course. This week, we consider some long shots in supporting actor.

Christopher Rosen: Hello, Joyce! It’s Thanksgiving weekend, when extended families gather together to talk about the Best Supporting Actor race? For our purposes, let’s imagine that world and dive into a race we’ve somewhat neglected in recent weeks. Maybe that’s because of how solid it is compared to other spots. While I could make the cases for multiple different groups of five in the Best Supporting Actress category, Best Supporting Actor feels a little more coalesced. Nearly every expert has “Everything Everywhere All at Once” fave Ke Huy Quan and “The Banshees of Inisherin” star Brendan Gleeson among their picks — with almost half of all experts predicting Quan for the win, including both of us. As we’ve discussed, his comeback narrative is irresistible and it’s easy to imagine even those Oscar voters left flummoxed by “Everything Everywhere” will warm to his personal narrative. As I overheard during a guild screening of “The Fablemans” this week, “When I know the people involved in a project, I love it. I can’t be unbiased.” (I promise I’ll only repeat that story to you another 650 times between now and March 12, 2023.) But even beyond Quan and Gleeson, the category feels pretty solid. Most expect either one or two of “The Fabelmans” actors to make the cut, with Judd Hirsch slightly ahead of Paul Dano among the experts. I have both in my picks at the moment, even though I’m not convinced either are locks. Hirsch is amazing and he’s got one of the many standout scenes in Steven Spielberg’s front-runner… but he is also only in the one scene. Dano, meanwhile, is quiet and contemplative — a grounding presence for the movie as Michelle Williams goes wild. It helps, as you mentioned, that his best scene is at the end — a lengthy chat with his onscreen son that feels so generous and understanding. Audiences leave “The Fabelmans” on a high, and he’s a part of those vibes. After those four, it’s kind of a scrum — one led by Ben Whishaw as the lone man with a significant speaking part in “Women Talking.” You have Whishaw in there, and it makes sense — but I don’t have a lot of confidence in that performance breaking through, especially when there are a lot of other contenders. At the moment, I’ve gone back to Brian Tyree Henry for our beloved “Causeway.” He’s sixth in the experts odds, and clearly an actor everyone wants to see take the academy leap. It makes sense to buy stock in Henry now, but I do wonder still if the movie is too quiet. (Will academy members pick “Causeway” to watch when there are so many other movies that will probably take screener priority?) I’ve also toyed with and predicted, well, everyone — including Barry Keoghan for “Banshees” (a Joyce special), Eddie Redmayne for “The Good Nurse” (no one campaigns like Eddie) and Brad Pitt for “Babylon” (he rules, but I’ve cooled on his prospects, surprise surprise). So let me leave you with one name we haven’t taken super seriously so far: Tom Hanks in “Elvis.” The performance is… let’s say, BIG. But as one awards pundit noted this week, “Elvis” remains top of mind for academy voters. Is it possible we’re sleeping on a nominee sitting in plain sight — especially when Hanks could easily get in at the Globes and Screen Actors Guild? Have I gone around the bend?

joyceeng: There probably should be a little more conversation about Hanks (#sorrynotsorry). He’s definitely a player at SAG, which could be the only place he pops up in. And based on my carefully curated Instagram feed, there were several packed “Elvis” screenings this week and I saw one person, who is a SAG voter, attended two. Something tells me they may not be the only one. A common refrain I’ve heard since June is that my friends’ parents love “Elvis.” They also love Austin Butler — one’s dad texted that Butler’s “better than Rami Malek or Jamie Fox [sic]” and he would give him the Oscar — and while they’re less enamored with Hanks, I can see him being a coattail. Yes, I know how insane it sounds to say Tom Hanks could be a coattail, and I am not predicting him right now, but the “Fabelmans” gentlemen might have split support, and though Gleeson feels safe, “Banshees” is not guaranteed two slots either. For months now, it felt like there was a solid top six here and it was a matter of figuring out who to exclude, but what if more than one is left out in the cold? BTH would be my hopediction and I think he inspires the most passion of the fringe contenders, but I am still wary of predicting a lone nominee in supporting. As I explained last week, I have Whishaw mostly because I didn’t feel comfortable having double “Fabelmans” and double “Banshees.” I liked Pitt’s performance in “Babylon” — he operates in different tonal registers than most of the cast — but I didn’t come out of it thinking any of the actors were surefire nominees (and lbr, Tobey Maguire is the best supporting actor in that movie even though his whole storyline could’ve been excised). Color me shocked that you are now back on the Fabelmen after you just saw the movie again this week.

Christopher Rosen: Apologies to all the other good movies, but man, “The Fabelmans.” That’s the stuff! But it’s true, I don’t know that it can support two nominations here — and I’m not sure which person would miss. I’d lean Dano if I had to decide now, if only because Hirsch is so towering in his sequence and a beloved industry veteran who could probably use a little more academy recognition before he rides off into the sunset. At that guild event this week for “The Fabelmans” this week, Spielberg told a great story about Hirsch and moderator Judd Apatow seemingly couldn’t wait to ask the filmmaker about his 87-year-old star. I want to circle back to Hanks, who is probably closer to a nomination than anyone on Film Twitter wants to imagine. The case I’d make is that he’s got the biggest performance here, just massive — I’m talking scenery-chewing along the lines of Al Pacino or Jared Leto. It’s also something Hanks isn’t really known for as a performer: You don’t think of him going HAM with his ham. Better yet, he’s also going against type. Hanks’ last nomination came for playing Fred Rogers. In “Elvis,” he’s basically one mustache twirl away from being a cartoon villain. And like you typed, it’s easy to imagine him coattailing Butler’s Best Actor nomination into the category. I’m thisclose to predicting him, especially because “Elvis” is a really strong Best Picture option – but I’ll probably hold off until he lands an actual nomination from someone. But enough about Hanks. Make the case for Quan since we’ve both got him at the top.

joyceeng: Until more awards bodies start weighing in, Quan feels safer with each passing day. I may eat my words eventually, but he checks a ton of boxes. He has the performance, the film and the feel-good story. Before the Oscar talk began in earnest for “Everything Everywhere” — when it was just a breakout hit in the spring — there was already a ton of adoration for his turn. And while he has a comeback narrative, what’s most important is that the narrative is not the nucleus of his candidacy. There is passion for his performance and passion for “Everything Everywhere,” a top Best Picture contender that will bag multiple nominations. Glenn Close and Chadwick Boseman seemingly had unbeatable narratives too, but they also had weak films and were tripped up in the final straightaway by performances people couldn’t stop raving about in Best Picture nominees. And Quan is campaigning, reuniting with Harrison Ford and sharing how Steven Spielberg still sends him Christmas presents. Can’t wait for that reunion. But I’ll hand the floor to you now to go wild on a wild card: your fave, Mark Rylance.

Christopher Rosen: Oh, Joyce. The Rylance performance in “Bones and All” is my favorite kind of performance: on the razor’s edge of “should I take this seriously?” and “wow, what a profound display of empathy” — but with an accent that’s from outer space. I love it and, at least anecdotally, he’s gotten some good responses. But I think the movie is going to be too tough for academy members to swallow. I’ll leave you with one other name that I’d love to hopedict: Edward Norton in “Glass Onion.” I think his performance could reverberate all season, but I don’t want to say more until it hits Netflix.

joyceeng: Norton has some incredible line readings, but I’m not sure how big of a killing “Glass Onion” will make in the acting races yet. I concur about Rylance. That performance and film will be too unsettling for most folks — as I’ve told you a handful of times, I’ve heard multiple people say they nearly vomited and/or thought about walking out during Rylance’s opening scene. I can only imagine how quickly people will turn off the screener at home. Now excuse me while I feast on some leftovers.

PREDICTthe 2023 Oscar nominees by Jan. 24
Oscar odds for Best Supporting Actor
Who will be nominated?