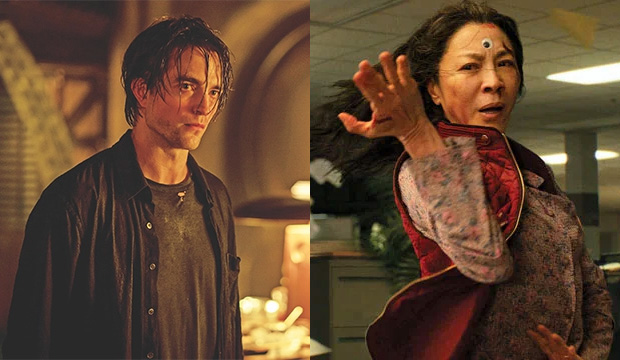 Of the movies already released in the first third of the 2022 calendar year (January through April), there are four titles that have a good shot at being nominated at next year’s 2023 Oscars: “The Batman,” “Turning Red,” “The Bad Guys” and “Everything Everywhere All at Once.” The last time a film debuted between January and April and was a major player at the Oscars was Jordan Peele’s “Get Out,” released in February 2017. Most years studios usually hold their Oscar bait movies until the final months of the year when awards campaigning kicks into gear, but in 2022 we already have a handful of titles that could get into various categories. Read on for your 2023 Oscars head start preview.

The film with the most likelihood of being Oscar nominated is Matt Reeves’ “The Batman,” the comic book blockbuster released in March. The transformation of Colin Farrell into the Penguin should be recognized in the Best Makeup & Hairstyling category. Sound will probably get in as well, along with the cinematography by Greig Fraser, hot off his first Oscar win for “Dune.” Variety’s Clayton Davis raved, “The camerawork, executed by two-time [Oscar] nominee Greig Fraser, is divine, framing an intimate and tension-filled experience that only a master of his caliber can achieve.” It also helps that the action film is a box office hit, earning $369 million domestically and $767 worldwide, and it did well critically, receiving an 85% at Rotten Tomatoes.

SEESamuel L. Jackson (‘The Last Days of Ptolemy Grey’) on playing a man with dementia and getting his Honorary Oscar [Exclusive Video Interview]

Two of the five nominees for Best Animated Feature have possibly come out already. The last Pixar movie to not be nominated for the Animated Feature Oscar was “Cars 3” in 2017, and thus the well-reviewed “Turning Red,” which currently has a 94% on Rotten Tomatoes, should get in. The other critical and commercial animated hit “The Bad Guys,” which received an 87% on Rotten Tomatoes, should also find a spot in the top five, too. This is one of the few categories in which the release date doesn’t factor into a film’s probability of being nominated. For example, “Raya and the Last Dragon” made it into the final five at the previous ceremony despite being released in March 2021. “Onward,” released in March 2020 the year before, made it into the 2021 Oscars ceremony.

SEEIs ‘The Northman’ an Oscar contender despite early release date?

Another early-year release I think has a shot at one or two Oscar nominations is the surprise arthouse hit “Everything Everywhere All at Once,” which scored an incredible 96% on Rotten Tomatoes. A24’s acclaimed comedy adventure starring Michelle Yeoh and Jamie Lee Curtis has its best chance at an Oscar nomination next year in the Best Original Screenplay category. Scott Mendelson at Forbes says, “A film this well-reviewed and well-received, from a gold-chasing distributor, is almost certain to end up among the ten Best Picture Oscar nominees and among the five nominated original screenplays.”

Some might predict that Yeoh gets in for Best Actress, too, but we’ll need a few additional months to get a sense of the landscape in that category to see if she has a legitimate chance. Since “Everything Everywhere All at Once” is a VFX-heavy movie, it could also be a contender for Best Visual Effects.

There is still a long road to the upcoming Oscars ceremony, so only time will tell if academy voters remember all the great films the spring of 2022 had in store.