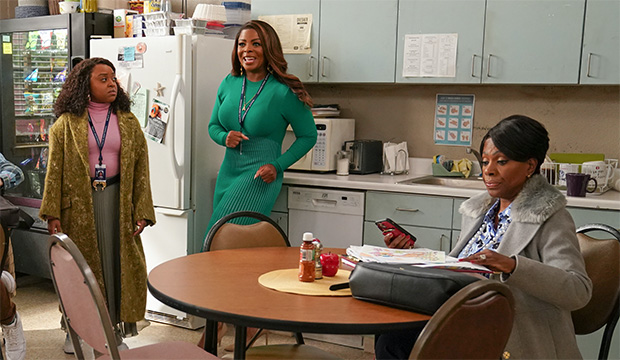 In the 28-year history of the Screen Actors Guild Awards, 11 series have each received two Best TV Comedy Actress nominations at once, with the most recent case having involved “Ted Lasso” cast mates Juno Temple and Hannah Waddingham. The category outpaces most of the guild’s other five individual TV ones in that regard, but remains the only one in which no costar trios have ever been simultaneously recognized. That gap could soon be filled, however, by the ladies of ABC’s “Abbott Elementary.”

“Abbott Elementary” creator Quinta Brunson stars on the ABC series as second grade teacher Janine Teagues and is supported by Sheryl Lee Ralph as veteran educator Barbara Howard and Janelle James as their inept principal, Ava Coleman. Gold Derby’s SAG Awards predictions indicate that all three women will earn Best TV Comedy Actress notices for their work on the show’s first two seasons. They all recently competed at the 74th Emmys, where Ralph snagged the Best Comedy Supporting Actress trophy and Brunson was honored for writing the sitcom’s pilot episode. On our SAG Awards list, the trio are collectively sandwiched between reigning champ Jean Smart and her “Hacks” costar, Hannah Einbinder.

Brunson, Ralph or James would be the fourth actress to directly defeat one or more cast mates in this category, after Megan Mullally (over Debra Messing, “Will & Grace,” 2004), Rachel Brosnahan (over Alex Borstein, “The Marvelous Mrs. Maisel,” 2019) and Catherine O’Hara (over Annie Murphy, “Schitt’s Creek,” 2021). Aside from “Ted Lasso,” the other shows that have produced dual Best TV Comedy Actress nominees are “Ally McBeal,” “Sex and the City,” “Everybody Loves Raymond,” “Ugly Betty,” “Modern Family,” “Grace and Frankie” and “Dead to Me.”

Across the acting guild’s other TV categories, there have been eight cases in which three costars have vied for a single statuette. The first occurred in 2000, when Edie Falco won the female drama prize for “The Sopranos” against cast mates Lorraine Bracco and Nancy Marchand. Four years later, “Everybody Loves Raymond” players Peter Boyle, Brad Garrett and Ray Romano all picked up Best TV Comedy Actor bids, while the miniseries “Angels in America” received three nominations each for its male (Justin Kirk, Al Pacino and Jeffrey Wright) and female (Mary-Louise Parker, Meryl Streep and Emma Thompson) performers.

SEE Ray Richmond: Why ‘Abbott Elementary’ deserves to be an awards juggernaut