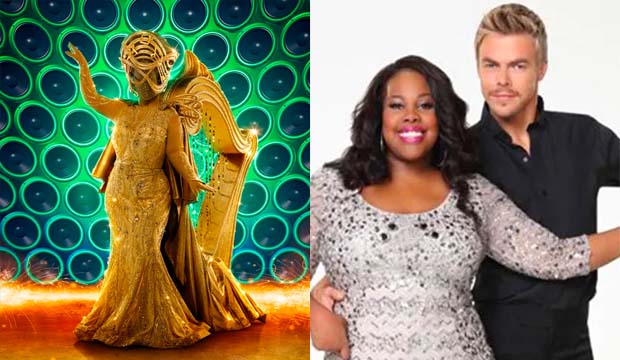 Reality TV history was made when Amber Riley was awarded the Golden Mask Trophy on “The Masked Singer” Wednesday night. The actress became the first celebrity to win both the singing competition and “Dancing With the Stars.” She took home the Mirrorball Trophy with her partner Derek Hough on Season 17 in 2013.

Riley was revealed to be Harp, who was the first performer of the season and the last one standing. Her song selections throughout the weeks included “Perfect” by Pink, “I Have Nothing” by Whitney Houston, “Thank You For Being a Friend” from “The Golden Girls,” “About Damn Time” by Lizzo, “The Edge of Glory” by Lady Gaga and “Gravity” by John Mayer. She defeated the Lambs in the finale, who were revealed to be singing trio Wilson Phillips.

“This has been such an amazing experience,” Riley told “The Masked Singer” host Nick Cannon following her victory. “Just to be able to come out here and be completely covered and let my talent speak for itself. And the love that I have for people, and wanting people to heal, and feel what it is that I’m singing. So I hope everybody felt my soul, because I bared it right here on this stage.”

Wayne Brady was simultaneously gunning for the same prestige this year. After winning “The Masked Singer” as Fox in Season 2, he made it all the way to the “Dancing With the Stars” finale this year with his partner Witney Carson. The duo came up short, placing third behind winner Charli D’Amilio (with Mark Ballas) and runner-up Gabby Windey (with Val Chmerkovskiy).

Although nobody had won both shows before Riley, like Brady, a select few had claimed victory in one competition, but failed to close the deal in the other. Rumer Willis took home the Season 20 Mirrorball Trophy with her partner Val Chmerkovskiy, but went home after her semifinals performance as Lion on the inaugural season of “The Masked Singer.” Donny Osmond reigned supreme on Season 9 of “DWTS” with his partner Kym Johnson, but came just shy of winning Season 1 of “The Masked Singer” as Peacock. He finished in second place to Monster (T-Pain).

Be sure to make your predictions to influence our reality TV racetrack odds. You can keep changing your predictions until just before the next episode airs and win eternal bragging rights and a spot on our leaderboard. See our contest rules and sound off with other fans in our reality TV forum. Read more Gold Derby entertainment news.