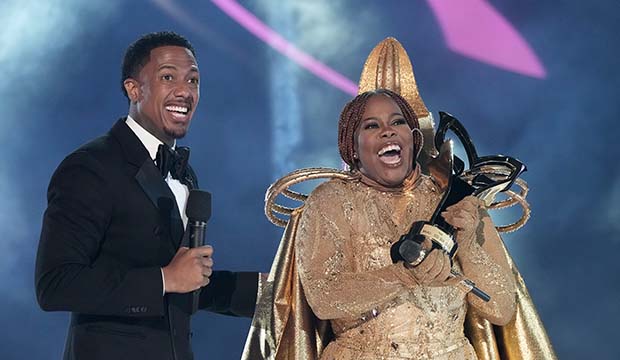 “The Masked Singer” aired a two-hour epic finale on Wednesday night, with Harp walking away with the Season 8 Golden Mask Trophy. She defeated Lambs in the first ever all-female final. We found out trio of wooly divas were multi-platinum girl group Wilson Phillips before Harp stood center stage and unmasked herself in front of panelists Robin Thicke, Jenny McCarthy, Ken Jeong and Nicole Scherzinger.

Prior to Harp’s unmasking, the panelists submitted final guesses: Yvette Nicole Brown (Robin), Jordin Sparks (Jenny), Jennifer Hudson (Ken) and Amber Riley (Nicole). When the mask came off it was Nicole who was proven correct. The award-winning singer, actress and Broadway star had blown them away with her renditions of “Edge of Glory” by Lady Gaga and “Gravity” by John Mayer.

“This has been such an amazing experience,” Amber told host Nick Cannon during her unmasked interview. “Just to be able to come out here and be completely covered and let my talent speak for itself. And the love that I have for people, and wanting people to heal, and feel what it is that I’m singing. So I hope everybody felt my soul, because I bared it right here on this stage.”

“I’m not gonna lie, I’ve always been a fan of yours,” said Nicole. “I’ve seen you perform live, in person. It’s chills, it’s goosebumps, it’s transcending. We love you so much.”

“I feel more than enough,” Amber confirmed. “Besides the trophy, that’s what I’m taking home with me. Everything that you guys said to me earlier today. You made me cry. You messed up my makeup.” To her fans she added, “Whatever it is you want in this life, you go after it. It may be hard. It may be a rocky journey, but at the end of that journey it will totally and completely be worth it. So keep going.”