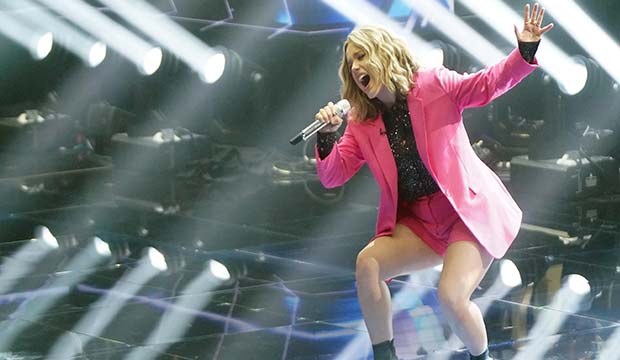 “American Idol” continued with the 19th episode of Season 20 on Sunday, May 15. This installment of the ABC reality TV competition saw the Top 5 singing songs from the Carrie Underwood songbook in Round 1 and a second song of their choice in Round 2. As always, judges Luke Bryan, Katy Perry and Lionel Richie provided commentary. This week’s mentor was Underwood herself, who was crowned the “American Idol” champ for Season 4 in 2005.

At the end of the night Fritz Hager and Nicolina were sadly eliminated. So who was the best from Sunday night? And have they continued to improve each week? Below I rank each hopeful from the least impressive (but with room to grow) to a possible Season 20 winner. Hit the lights and let’s go!

Below is the American Idol season 20 episode 19 performances ranked: Who was best?

3. HunterGirl (“Undo It” by Carrie Underwood): With her first song, HunterGirl decided that “Undo It” would be her ticket to the finale, which sounded like a great idea on paper since this is an incredible song. I could not help but compare it to Carrie’s original though. In terms of performance, she nailed it. In terms of vocals, there were a few moments that were less than perfect. By the end though, she had provided a great cover of a song that was not her best, but far from her worst. The judges clearly disagreed with me and praised this performance with one calling it her best so far, but this could be a case of it being better in person than on the screen.

2. Noah Thompson (“So Small” by Carrie Underwood): Nobody has had quite the roller-coaster of a journey in these rankings like Noah. To be clear, I love his voice, but sometimes his song choices are not great for him. Other times, he knocks it out of the park. His song choice for the Carrie Underwood theme was ironically my least favorite song from her entire catalog. It’s very schmaltzy in my opinion, but also so very perfect for him. Having been unable to go to Vegas, he physically was unable to meet the country icon, but he hit every heartstring of the viewers with his interaction with her. Fast forward to Sunday where he was in the building, gave a solid performance with a great vocal and worked the stage like a professional for the first time. This was the perfect time to give his best performance and that he did.

1. Leah Marlene (“I’ll Stand by You” by Carrie Underwood) Super fan alert! Watching the interaction between the two was just so pure. The song choice on paper worried me at first, but then Leah opened her mouth and any doubt disappeared. I was a bit surprised that she was not playing guitar during this performance since it would differentiate her from the version of this song that many remember. Three great voices and three differing approaches. This was equally as captivating as both Pia Toscano and Carrie, but Leah added an extra layer to this one that made her version stand out to me: Originality. The song sounded fresh in her hands and the song is far from young. That is the stardust that is Leah Marlene at its full capacity.

3. Leah Marlene (“Separate Ways (Worlds Apart)” by Journey): I love Journey but this take on the rock hit did not wow me whatsoever. It was not her worst performance, but I would not rush to download this cover of the song either. Saying that, social media had a really interesting reaction to this performance in the best way possible. She clearly did something right and occupies a whole lane of her own with two county artists more than likely splitting the votes of their fan bases. Look to her to win this season.

2. Noah Thompson (“Working Man” by Larry Fleet): Unfortunately, I was not as big of a fan in regards to his second performance. The song was interesting and vocally Noah sounded solid, but this performance was nothing to write home about. He is capable of so much more and this felt like a phoned in performance. This performance hit a chord with America and evoked strong emotional responses on social media, both positive and negative. It is a performance destined to be dissected at the water cooler.

1. HunterGirl (“Girl Crush” by Little Big Town): I was not shocked when Ryan announced that HunterGirl had chosen a song from Little Big Town whatsoever. It was the song choice that had me surprised since the band has so many songs that would work so well for her, like “”Tornado,” which I was expecting. This was the biggest risk that she has taken so far, a risk that might have cost her some voters from fans who really despise this song and let their anger be known on social media. That would be their loss though since this was the best performance that HunterGirl has given throughout the season. This was her shining moment of the night by far!