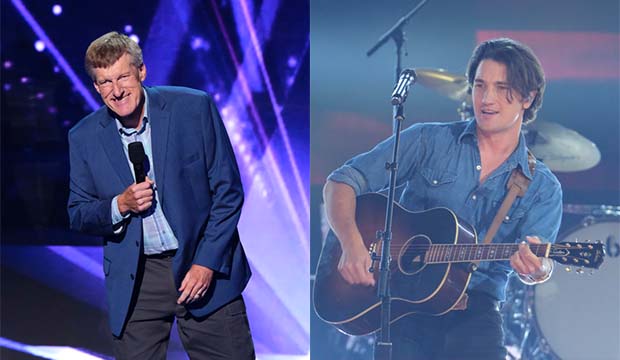 On August 9, “America’s Got Talent” put the majority of the power in viewers’ hands when the first group of returning qualifiers performed for America’s vote in Episode 11 of Season 17. Only two acts will advance from the qualifiers to the live rounds in, dare I say, a welcome change of rules from previous seasons. So who was the best of the night? And who was not ready for primetime?

Terry Crews resumed his hosting duties and Simon Cowell, Heidi Klum, Howie Mandel, and Sofía Vergara once again made up the judges panel. As in the past, this year’s champion will take home a $1 million cash prize and be able to showcase their talent as a headlining act in Las Vegas. See our rankings for Tuesday night below.

11. Don McMillan: Yay, more PowerPoints. Lucky, lucky me. I have already expressed my hatred for PowerPoint presentations but for every person like me, there is a Don McMillan. I would have rather watched traffic lanes than his act. I love weird statistics but this man needs to just tone it down a bit for me to vote for him. Social media had a mixed reaction to Don with many on my side of the aisle, but some really loved his set. I did like his dad jokes a bit more this time around though. Will he advance? Probably not.

10. Oleksandr Yenivatov: First and foremost, my thoughts and prayers are with the people of Ukraine. Saying that, I really was not a fan of Oleksandr and this is not an act I would go pay to see. The spinning trick was cool to watch but the rest just makes me so glad that I cannot move my body like that. I don’t think the audience knew how to react to it either based on the reactions. Social media had a predominantly positive reaction, so he has a shot at advancing. On the flip side, I cannot remember an act that has creeped me out so much making it that far.

9. Ben Lapidus: His audition song may have grown on me over time but I do not foresee a future where this particular performance is remembered down the road. Love the idea of the costume change into a Bon Jovi outfit from the 1980s though, which was a cool addition. To directly quote my best friend midway through the performance “WHAT IS HAPPENING?!” Social media had an oddly mixed reaction to this act, which scared me into thinking he does have a shot at advancing to the next round. Others were equally as unimpressed as I was by the act.

8. Amazing Veranica & Her Incredible Friends: I love dogs. Amazing Veranica & Her Incredible Friends had a great audition but tonight was not as flawless. The initial dog was not totally cooperative at first, but after that minor stumbling block, the act hit its stride. What’s better than adorable dogs doing tricks? Let’s make them go down a slide and do a conga line! As Sofia said, animals are unpredictable but these dogs are beyond happy. Do I think this act will advance tomorrow? No. Do I think it was adorable and fun? Yes and that’s all that matters in the end. Social media loved the act but the majority of the fans did acknowledge that it was not as great tonight.

7. Lace Larrabee: This was the most disappointing act of the night. Lace regressed from her audition, which was sad to see. The opening with the jokes about her husband was solid, but then the jokes got less funny. I actually would have buzzed a lot earlier than Simon did. Howie, our resident comedian, usually is my tent pole for comedians since he knows what works and what does not work. There is a reason why he has had such a legendary career. I hope that she takes Howie’s advice in the future. Social media loved Lace so she still has a fighting chance to advance to the next round.

6. Stefanny and Yeeremy: I love Stefanny and Yeermy and they did not disappoint with this routine. It was beyond entertaining and set the stage on fire. Saying that, I did not like this routine as much as their audition. The judges were mixed in their reaction with Simon not loving it midway through the act. Great? Yes! Final worthy? Not sure. Social media loved them so they have a good shot at advancing.

5. Ava Swiss: I loved Ava’s audition and think that she is a star in the making, but this specific song choice did not really work well. Vocally, she sounded great but the song really did not highlight her strengths enough. I’m not sure if she has a great shot at advancing to the next round of the competition. Social media was a bit mixed on Ava with many not loving the song and some not being a fan of the production of the performance. Vocally, the general consensus was that she sounded great. The judges loved it with Heidi saying that she nailed it.

4. Amoukanama: I like Amoukanama and the energy that the group brings consistently to every performance. They are having a blast and that’s great to watch. They not only stepped up their game but kept me thoroughly captivated. Saying that, I do not think this was a 10, but it definitely was something that stood out from the crowd in the best way possible. I have my fingers crossed they have a shot to advance to the next round, but I am still a bit worried by the reaction on social media. Starting off the show was both a blessing and a curse since many loved the act but by the end of the show, it fell off the radar.

3. Avery Dixon: Avery is an incredible saxophone player and his audition set the internet ablaze. How can you follow that up? Avery does that by topping it with flair and ease like no other. He is in a lane all his own and he’s owning that lane so well. Social media and the judges adored the performance and if I were a betting man, which I kind of am as a Goldderby regular, I would bet on him to advance.

2. Players Choir: This particular act has an edge that no other act has, the collective fan group of multiple teams that, if they come together as a voting block, could be quite the defense for this team of multi-talented athletes. The choice of Justin Timberlake’s hit was a genius choice of song as were the outfits that reminded me of the group from the first two “Pitch Perfect” movies. Energy was incredible and vocally they sounded great. The judges and social media loved the performance ,but my friend had the best soundbite with “These guys are the real deal!” They stand a very good chance of advancing to the next round.

1. Drake Milligan: Drake knows what will get him votes and doubled down on his “aw-shucks” nature, which was smart since social media loves that as seen by the latest winner of “American Idol.” The performance itself was amazing. He fired on all cylinders, which is not unexpected for a contestant with his background. If he did not know how to play the game at this point, I would be worried. Saying that, there is no denying his incredible voice and energy on stage. If he does not advance to the next round, I would be shocked. Social media lost its collective mind over Drake.

Which season 17 act is YOUR favorite at this point in the competition? Do you think they can snag the $1 million prize? Sound off in the comments below and with other fans in our reality TV forum. Also be sure to make your predictions to influence our reality TV racetrack odds.