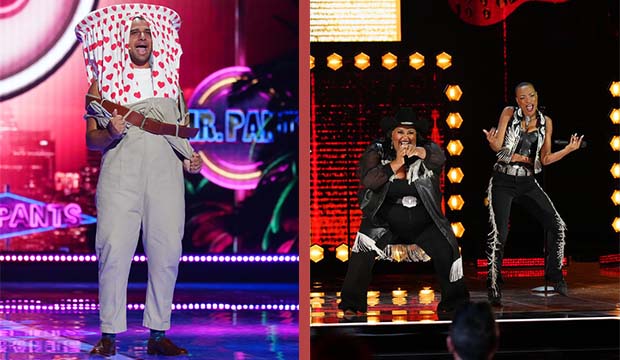 On August 16, the second group of returning qualifiers performed for America’s vote in Episode 13 of “America’s Got Talent.” Only two acts will advance from the qualifiers to the Season 17 finals. So who was the best of the night? And who was not ready for primetime?

Terry Crews resumed his hosting duties and Simon Cowell, Heidi Klum, Howie Mandel, and Sofía Vergara once again made up the judges panel. As in the past, this year’s champion will take home a $1 million cash prize and be able to showcase their talent as a headlining act in Las Vegas. See our rankings for Tuesday night below.

11. Mr. Pants: Mr. Pants is one of those acts that people either love or hate with no in-between. The reaction on social media proved that to me a thousand times over. I would have buzzed much earlier than Simon did. Mr. Pants did get funnier towards the end of the set. By funnier, I mean I did not roll my eyes at those jokes. Interesting gimmick and comedian, but overall not an act I would want to see ever again. Mr. Pants needs to button up his act.

10. Freckled Zelda: Before Freckled Zelda even stepped foot on the stage, I had a bad feeling based on the opening video. The ocarina is not exciting to me whatsoever. Sorry, not sorry. The song choice had me thinking of that iconic scene from “Stranger Things” and even then the song was just odd. This whole act screams “gimmick” to me and it seems like I am not alone in that lane. Technically, a step up from her last performance but still just a bit too much.

9. The Pack Drumline: I love everything that The Pack Drumline stands for and sincerely hope that at some point programs like this become a major trend around the world. The group’s performance tonight was fun to watch and opened the show with such energy that they could have lit up the Empire State Building. I had a mixed reaction to the performance since it did not wow me but I liked it. Saying that, by the end of the show, it became clear that other acts were better received by the voters, as seen by the reaction on social media which basically can be summed up as “That’s it?” While I personally disagree with that assessment, the odds might not be great for them to advance.

8. The Brown Brothers: The reaction on social media to this act was very surprising to me since I did not think that they were that great on this performance. Most of the impressions were spot on but some did not wow me. That Bon Jovi one was not great nor was the Gollum one. Social media and the judges loved this act so I clearly am in the minority. I agreed with Simon on this act. They have a shot at advancing but my gut tells me they will not.

7. Aiko Tanaka: The energy that Aiko brings to the stage reminds me of Howie. They both seem to just come alive in front of an audience. Some of the jokes did not quite land but overall, this was a solid set for Aiko. Social media seemed really divided on this performance with many calling her “amateurish” and noting that she seemed to be lacking in experience. Others loved her unique take on comedy calling her a star in the making. The judges loved her but more importantly, our resident comedy legend approved of her so that should mean a lot in terms of voting.

6. Fusion Japan: On any other night, I would have easily said that Fusion Japan would advance and they would be ranked either first or second. This performance was incredible and captivating to watch. Was it as good as their audition? Not in my opinion. Saying that, social media had a mixed reception to this performance with the naysayers calling the performance forgettable. The one thing both sides agreed upon was the costuming, which was universally praised.

5.  Wyn Starks: Vocally, Wyn is in a lane all his own. That voice is undeniably incredible. He poured his heart out on that stage after a video package that had many viewers in tears. Yet, he did not miss a beat. That is the mark of a professional right there! I personally did not like this performance as much as the audition performance, but again there is no denying that voice and its power. Social media loved the performance and my friend had the best soundbite of the night for me saying “This guy needs to get a role in a Broadway show!” I would double down on that and say he should write his own musical like Lin-Manuel Miranda since he seems to really connect to music on a whole other level than any other contestant this season.

4.  Duo Rings: Duo Rings just might be the best acrobat ring act that has ever been on the show. That last trick was insane and the performance was amazing to watch. The judges loved them so naturally I assumed that social media would think the same. Turns out, social media had a mixed reaction to the performance with some calling it boring as others predicting that it would result in a flood of votes since it was dangerous yet gorgeous to watch. A lot of people also seemed to think that there will be a baby boom due to this performance, which I found a bit odd but to each their own.

3.  Yu Hojin: Starting the video with the fact that he fell asleep at the wheel of a vehicle and ended up in the hospital at one point was an odd choice. More on that later when I address the social media reaction. The performance itself was captivating to watch in a weird way. I would love to see if he could top this performance, which is easily his best one so far in the competition. The picture changing at the end of the performance has me baffled and I really need to know how he did that. The judges loved him with Heidi calling the performance elegant and Sofia being baffled by how much was packed in to a little over two minutes. Simon called himself an idiot. That should make people happy? Social media loved this performance but that opening video created a small pocket of reaction on one social media outlet that vowed to vote for anyone but him. Mind you, that was the second time I saw that happen in one night. He stands an excellent chance of advancing if America does not want to put two singing acts into the next round.

2.  Madison Taylor Baez: Madison had what I like to call the perfect AGT performance. Nailed her skill? Yes, vocally she sounded incredible. Worked the crowd? Absolutely! Perfect stage accompaniment? There was no overproduction with the effects and backing track on this one whatsoever! Simon explaining that finding her was not a rigged situation cleared up some things, which also works in her favor. The judges loved it but social media really adored it. Should she worry about the naysayers that do not believe Simon’s explanation and have vowed to vote for others just to not see her advance? No, and that voting block needs to stop picking on a child.

1. Chapel Hart: Is there an act that is more ready for the finale than Chapel Hart? Look back at my little checklist about perfect auditions since they did all of that and added a new criteria: Swag! America’s Got Country! The judges loved this performance and social media went nuts over it. They are going to sail through to the finale. Calling it now.

Which season 17 act is YOUR favorite at this point in the competition? Do you think they can snag the $1 million prize? Sound off in the comments below and with other fans in our reality TV forum. Also be sure to make your predictions to influence our reality TV racetrack odds.