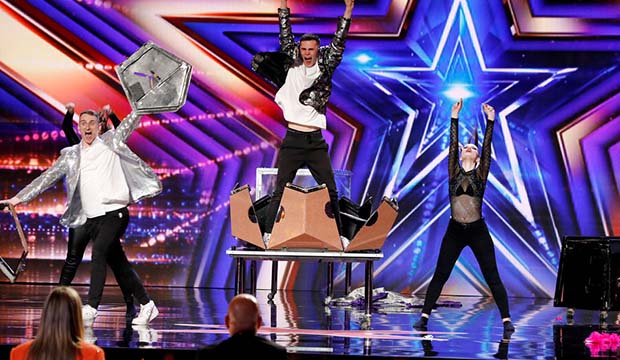 On June 21, “America’s Got Talent” returned with more spectacular auditions on Episode 4 of Season 17. Host Terry Crews welcomed series judges Simon Cowell, Sofia Vergara, Heidi Klum and Howie Mandel back to the dais with performances from the fourth set of entertainers. But who were the best performers from the episode? And did any move forward that shouldn’t have? Below we rank the 14 acts who advanced from worst to best.

14. Justin Rupple: There absolutely is an audience for Justin Rupple. I am just not part of it. His impression of Mark Wahlberg was good though. Social media had a mixed reaction to this act, with many of the naysayers singling out the fact that he was not very exciting to watch. I have to agree on that particular assessment. It will be interesting to see how far Justin progresses in the competition.

13. Testa: Normally, acts like this are a no go for me since they freak me out. Testa decided that today was the day he would not only play with fire and knives, but use them to build a ladder, which he naturally climbed. If that was not weird enough, he pulled out another blade and some contraption from a horror movie too. Hard pass from me, but we all know there is a market for this stuff. I’m curious, yet dreading to see what else he has up his sleeve.

12. Cline Twins: Hockey tricks are fun? The Cline Twins seem like nice kids and can do cool stuff with a hockey puck. They must be a blast at parties. I just have a difficult time envisioning this selling tickets in Vegas. Social media was impressed by this act and to the surprise of nobody, the more ardent fans skewed younger rather than older. I enjoyed it for about one minute.

11. Chris James: We did not get to see too much potential from this particular audition, but from what we did see…I was not too impressed. Social media had a mixed reaction to him, but compared him to Chris Redd of “SNL” fame. Safe to bet that he needs to show a lot more of his skills to advance further.

10. Connor King: In terms of potential, there is a lot of it in Connor King. This audition was not stellar and he failed to get a yes from our resident comedian, Howie. That says a lot. Social media was not a fan of him at all. Unfortunately “edgy” comedy won’t make it far on a family friendly show.

9. Lace Larrabee: Lace was easily the top comedian of the night and wowed the judges. Most jokes landed and a few were a bit rough, but Lace has something that stands out big time. She is very reminiscent of the best comedians the show has ever seen in terms of comfortability on the “AGT” stage. I’m really impressed she didn’t miss a beat when Sophia asked her a question in the middle of her act.

8. Ethan Jan: This was the most unhinged magic act ever. What Ethan lacks in showmanship, he more than makes up for in pure skill. The Rubik’s cube can be fun, but is this a million dollar act? Not sure. Social media had an extremely positive reaction to Ethan, which did not surprise me since it was something completely different from anything we have seen this season. My only concern is that it does not quite scream “Vegas.” Color me curious though.

7. Kieran Rhodes: Kieran discovered his musical aptitude from YouTube and Billy Joel. Throw in the fact that he is self-taught and you have quite the musical prodigy here. Vocally, he is a bit reminiscent of Billy Joel and Charlie Puth, which is a cool lane to be in since it’s pretty timeless. Showmanship is where I think he needs to up the ante. Social media reacted positively to Kieran, but there were a few naysayers who saw him as being a bit bland. Saying that, potential thy name is Kieran Rhodes.

6. Jannick Holste: Jannick has a lot of personality, which is always great. His showmanship was on point as well. The magic skills are what won me over. If you would have told me that he was a magician of that caliber, I would have doubted you. This combination of dance and magic is something that I have never seen before, so color me curious to see where this act goes down the road. Social media predominantly loved him, but naysayers wanted more magic and less dance. Will this act win? No way. Just sit back and enjoy the ride.

5. Cubcakes: In terms of pure energy and joy, the Cubcakes have the market on lock. Have we seen better dancers this season? Yes, but something about this group is captivating. They were a perfect start to the night and, on paper, should be an act that voters will love. Surprisingly, viewers were not completely taken with the group, but acknowledged the potential of the act solely based on the combination of skill and fun factor.

4. The Glamour Aussies: I am usually not a huge fan of animal acts, but something about this dog is captivating. Also, the whole “Beauty and the Beast” storyline was cute. Color me curious. Social media was iffy on this act, but something tells me that this dog is going to be one to watch out for in terms of being a unique act that America will fall in love with.

3. Kristy Sellars: Many viewers, including myself, recognized Kristy Sellars. It’s difficult to forget a pole dancer that has already won “Australia’s Got Talent.” Saying that, the act is so much more than pole dancing and becomes a multi-media experience that nobody expects, which not only netted her first win, but complete agreement from “AGT” judges as well. Do I buy that Simon had no clue who she was? No, not in a million years. This act would fit right in Las Vegas and is completely unique. Social media loved her.

2. Kristin Cruz: Because of her social media fame, I saw a lot of posts as soon as she appeared on the screen. Kristin has no lack of personality while simultaneously being a bit shy. As soon as she started singing, I questioned why she was here instead of “The Voice” or “American Idol,” but “AGT” is a good place for singers historically as well. Social media loved her, which did not surprise me based upon her following there. Her fanbase could be a voting powerhouse if every member votes consistently.

1. Mayyas Dance Crew: The act of the night was easily the Mayyas Dance Crew, which brought a whole new style of dance to the show. It was unlike anything we have ever seen on any talent show. The judges loved this act and praised it, deservedly so. Then Sofia hit that Golden Buzzer and off to the live rounds the group goes! Sofia chose the perfect act to use her golden buzzer on. Social media loved them as well, with many praising it as a cultural experience akin to Riverdance and Shen Yun. We might have just seen this year’s winners!