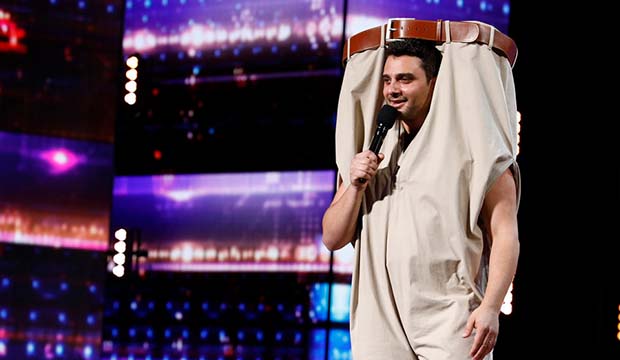 On June 28, “America’s Got Talent” returned with more spectacular auditions on Episode 5 of Season 17. Host Terry Crews welcomed series judges Simon Cowell, Sofia Vergara, Heidi Klum and Howie Mandel back to the dais with performances from the fifth set of entertainers. But who were the best performers from the episode? And did any move forward that shouldn’t have? Below we rank the 11 acts who advanced from worst to best.

11. Mr. Pants: Props to Mr. Pants for originality. Naturally, the judges really enjoyed this comedy act, much to my chagrin. This strikes me as the novelty act of the season that will drive me insane. Social media had a mixed reaction to Mr. Pants with some calling him hysterical, while others viewed him as cheesy. Maybe that is his leg up in the competition? Who knows, he might get better.

10. The Dremeka: This might be the creepiest act of the season. Like seriously, this song brought me right back to watching “The Omen” on Halloween for the first time. That song still terrifies me! Then they started singing “Toxic” and it got interesting. My initial reaction was, “Anyone got holy water and a squirt gun?” The social media reaction was predominantly positive. Many people loved this choir. Imagine if they partnered with Harper!

9. MPLUSPLUS: Ribbon with an LD light is a cool idea. Basically, the lights change colors with beats or movements. Is it very Vegas? Yes! Would I pay to see that? Not so much.  Not my cup of tea, so to speak. Social media reaction was generally positive, with some negative commentary, joining my camp.

8. Jordan Conley: Jordan was easily the best stand-up comedian of the night. That’s the good news, considering that he has an infectious personality and no lack of energy. Some of the jokes may not have worked for me, but overall the judges and social media loved him. Color me curious to see how far he advances in the competition.

7. Lily Meola: Lily’s original song is radio ready now! The fact that she is an undiscovered talent, more or less, is incredible. She wowed the judges and the crowd easily. She also impressed on social media in a similar manner, receiving the most praise across all the platforms out of any of the night’s acts. Heidi especially loved her, giving her the Golden Buzzer. Off to the live rounds she goes!

6. Mia Morris: I’m not a fan of her view on school, but Mia Morris is an extremely gifted musician. The audition was fun and unique. She is absolutely in a lane of her own in this competition, which is great. She felt like a cool mix of Ed Sheeran and Avril Lavigne. The audition was a bit slow though. I felt like I woke up and suddenly I was back in the 2000s, which is also a fun vibe. Social media loved this act, with some noting trepidation in regards to the growth Mia can have with the slower pace required. Maybe some pre-recorded aspect next time?

5. Nicolas Ribs: This act kicked off the night of auditions with a bang. This is not the usual magic act that we are used to seeing and it reminded me of something that we might see on a television show or movie set far into the future. This absolutely is an act that could be a headliner in Vegas. Just imagine what he can do with multiple screens in a huge auditorium. Nicolas Ribs is definitely one to watch out for if he makes the live rounds. Both the in-studio audience and TV viewers went wild as seen by the social media reaction.

4. Chiko: Chiko seems like a nice guy, which makes me question why he does what he does. The minute the top pole was added, I was intrigued and terrified simultaneously. The higher it got, the more nervous I got, so naturally he blindfolded himself at one point just to freak us out a little bit more. When the mistake occurred, I thought he would be getting a red X from Simon, but thankfully my gut reaction was wrong. I was finally able to breathe again when his feet touched the ground. The judges and social media loved this act. I could see him doing amazing in the live rounds with the amount of love he has received thus far.

3. Connor Johnson: Connor has a very likable quality to him and seems super laid back. There were zero nerves to be seen. To be honest, his guitar playing was not exactly amazing, but vocally Connor surprised me. To keep it short and sweet, a star has been born. The first song was pretty, but bland. The second song was a thousand times better for his voice. The audience and judges loved him as did the majority on social media. Connor might have a good voting block with younger viewers if he makes the live rounds. To quote one of my friends who texted me after the audition, “This guy is the real deal.”

2. Siegfried and Joy: My initial reaction to this act was that AJ Styles of WWE and Will Byers of “Stranger Things” had somehow transported out of their shows, formed a comedy magic act and dressed up like Joe Exotic. There was no lack of energy in this act. There was no lack of entertainment. Frankly, I expected to hate them, but it was stupidly brilliant. Social media was mixed on this act, as were the judges, but personally, I want to see more of these two since they reminded me of Piff the Magic Dragon, minus the canine, mixed with Mikey Day’s physical comedy skills.

1, Merissa Beddows: When Merissa said she was an opera singer, I perked up with curiousity. Then, she took a left turn at Albuquerque and did impressions, blowing my mind. The Ariana Grande impression alone was incredible, but throw in Stevie Nicks and Celine Dion…let’s just say that she is tailor made for “SNL.” This was a perfect audition. Social media and the judges both loved this act, but I will add another layer to her prospects. Lorne Michaels, if you read this, I just found your next cast member. And we might have just seen our winner!