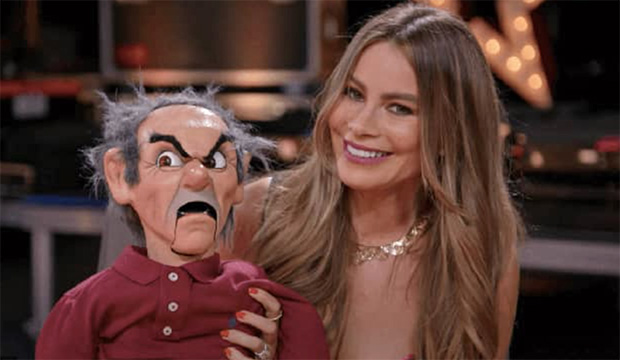 Ever since Sofia Vergara became a judge on “America’s Got Talent” in 2020, there have been several remarks about her being a ventriloquist — or, as she adorably pronounces it, “ventriquolist.” But is Sofia Vergara really a ventriloquist? To answer that question, we need to go back to her former job as one of the stars of “Modern Family.”

During her 11-year run on the ABC family comedy, the Colombian-American actress earned four Emmy nominations for playing Gloria Delgado-Pritchett, the wife of Jay (Ed O’Neill) and the mother of Manny (Rico Rodriguez). Obviously, over the span of 250 episodes, the show’s characters would occasionally venture outside of their normal comfort zones and do wild things for entertainment purposes, and one such story line involved Gloria becoming, yep, a ventriloquist.

Gloria’s puppet Mr. Grumpy made his official debut in the Season 4 episode “Yard Sale” as a way for Manny to respect his mother again, and for Gloria to respect herself. “Holy maracas, I think I sat on the right lap,” she said in Mr. Grumpy’s gruff voice. Some of the puppet’s other zingers included: “Look at all those white faces, I see we made it over the wall,” “I just came from the movies — a whole day’s pay to see ‘Basic Instinct,’ and basically it stinks,” and, “I just met the girl of my dreams — she gave me the termites!”

At end of the hilarious scene (watch below), the other characters came to realize that Gloria had in fact married a human version of her puppet, as Jay acts, dresses and sounds just like Mr. Grumpy.

One of the most popular contestants to ever win “America’s Got Talent” was Darci Lynne Farmer, who was only 12 years old when she prevailed in 2017 thanks to her ventriloquism skills. Of course, when Vergara joined the show in 2020, the producers just had to introduce her to Darci for a special one-on-one conversation.

“Did you know that I’m a ventriloquist, too?” Vergara asked the talented teen (watch below). “Can I introduce you to Mr. Grumpy?” The actress then pulled out the very same puppet used on “Modern Family” a decade earlier. Vergara started showing off her talents, though Darci didn’t seem too impressed. Perhaps Vergara moved her lips a bit too much for the girl’s liking?

SEE ‘America’s Got Talent’ winners list: All seasons, plus ‘The Champions’

During the June 14, 2022 episode of NBC’s reality TV show, the judges were discussing which talents they would showcase if they ever decided to be contestants on “AGT.” Sofia name-dropped ventriloquism as “something that comes natural to me,” while Heidi Klum claimed she’d “yodel while hula hooping” and Simon Cowell said he’d do something “dangerous” and “thrilling.”

Later in the same episode, a ventriloquist comedian named Jack Williams introduced himself to the judges and was sure to say hello to Vergara, his fellow puppet-talker. After his act, he received four “yes” votes from the panel and made it through to the next round. “It means a lot to him [that I liked him],” joked Vergara. “I’m sure that he was shy to say that he looked up to me.”