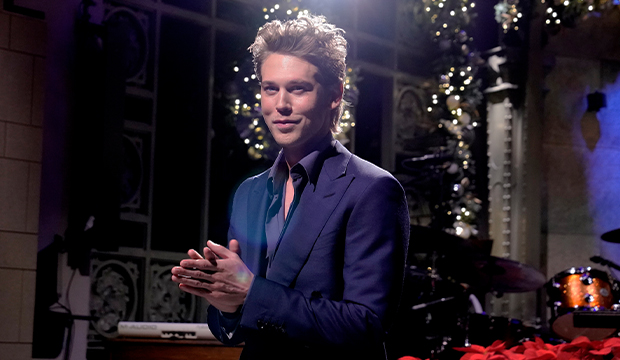 By hosting the 2022 Christmas episode of “Saturday Night Live,” “Elvis” star Austin Butler made a stop on his awards campaign trail that quite a few Oscar winners have made before. Since 1976, 26 actors have gone on to earn academy recognition within five months of hosting the NBC sketch show, and one third of those bids have been successful. Considering examples from the last decade alone, Butler’s chances are much greater, and his hosting stint involved several wise choices that should only benefit him in the coming months.

Butler opened the 48th “SNL” midseason finale by delivering a short but sweet monologue during which he reflected on his career beginnings and dedicated the episode to his late mother. He then displayed his comedic talents in four live and two prerecorded sketches, embodying such characters as a temperamental white elephant participant, a George Bailey-esque Christmas movie protagonist, and one of five strange, European children obsessed with marzipan. Perhaps the most memorable moments of the night involved him promoting his film, both by playing an elderly “Jewish Elvis” groupie named Lois and later singing “Blue Christmas” in tribute to departing cast member Cecily Strong.

Sam Rockwell (“Three Billboards Outside Ebbing, Missouri,” 2018) and Ariana DeBose (“West Side Story,” 2022) both won their Oscars soon after hosting “SNL” midseason premiere episodes, while Robin Williams (“Good Morning, Vietnam”) lost after doing the same in 1988. The only two nominees who have properly helped ring in new seasons of the show – Sigourney Weaver (“Aliens,” 1987) and Adam Driver (“BlacKkKlansman,” 2019) – did not triumph on their bids.

The remaining three performers who have received Oscar notices and wins directly after hosting “SNL” are Louis Gossett Jr. (“An Officer and a Gentleman,” 1983), Gwyneth Paltrow (“Shakespeare in Love,” 1999), and Anne Hathaway (“Les Misérables,” 2013). Hathaway had previously earned an unsuccessful bid for “Rachel Getting Married” after a 2008 “SNL” gig.

Hosting “SNL” does not always guarantee an academy mention, as evidenced by the recent failed attempts of James Franco (“The Disaster Artist”), Claire Foy (“First Man”), Jennifer Lopez (“Hustlers”), and Eddie Murphy (“Dolemite Is My Name”). However, the relative narrowness of this season’s Best Actor field already works heavily in Butler’s favor, and his episode more so serves as part of the buildup to his highly possible win.