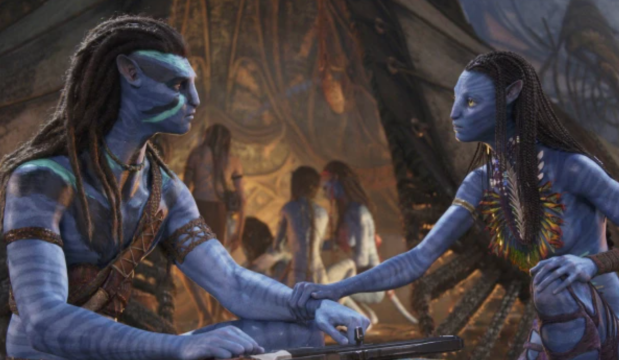 James Cameron brought a select group of lucky junketeers, critics, and awards pundits in major cities back to Pandora on Tuesday, for the first screenings of “Avatar: The Way of Water.” But many of the invitees were absolutely wowed by the propulsive filmmaking, high-tech special effects, and even the emotional reach of the film.

Let’s turn now to Twitter, where this reporter witnessed one New York-based wag posting his opinion as he relieved himself in the men’s room after the three-plus hour extravaganza.

“New York” Magazine’s Bilge Ebiri was caught up by the picture hook, line, and sinker.

AVATAR: THE WAY OF WATER might be James Cameron’s sweetest, gentlest, most personal film. Possibly even his most emotional. It revisits all his greatest hits, but it’s always totally sincere. He is never leaving Pandora. He loves this family. By the end, I did, too.

James Cameron once again shows filmmakers how it’s done. I’ve said it a thousand times. Never doubt him. AVATAR: THE WAY OF WATER is how you do epic blockbuster-ing. Emotional, visceral, and as big as movies get. @officialavatar

“Sure it was a little long,” warned self-professed “Avatar”-stan Kara Warner, but this doesn’t seem to be a big issue for her.

As an Avatar stan, I had high hopes for #AvatarTheWayofWater and for me it totally delivers. Sure it's a little long, but worth it for the gorgeous visuals, wonderful new characters. A total thrill.

Monkees enthusiast Mike Ryan was simply knocked over by the technical aspect and says he’s never seen anything like this before.

AVATAR: THE WAY OF WATER: Yeah never bet against James Cameron. Trying to spare hyperbole, but I’ve never seen anything like this from a technical, visual standpoint. It’s overwhelming. Maybe too overwhelming. Sometimes I’d miss plot points because I’m staring at a Pandora fish

But British critic Christina Newland is a little less impressed. The spectacle is there, but the story felt a little hollow to her.

Avatar: The Way of Water is a film to be admired more than loved – some remarkable spectacle, some throwback to Titanic set pieces, some really lovely visual flourishes. But it’s also interminably, ploddingly overlong, and more impressive than truly absorbing.

One wrinkle to “Avatar”’s first reactions: these special screenings were all shown in theaters that can project in High Frame Rate, or, at least, partial High Frame Rate. (The movie toggles between the two, sometimes shot-to-shot in one sequence.) Clearly, this was not an issue for many (see above) but it didn’t quite fly for everyone. Here’s Chicago-based critic Scott Tobias coming in with Groundskeeper Willie to elaborate.

This sentiment was echoed by one or two other old-school wisenheimers.

Ugh, someone tell James Cameron they left the “motion smoothening” feature on during the AVATAR press screening. How humiliating.

Luckily, the night of reflexive Twitter reactions didn’t end without someone deploying the ol’ “felt like a kid again” chestnut.

James Cameron's #AvatarTheWayOfWater is a monumental filmmaking achievement striking a great balance between technical & emotional. The 48fps 3D experience features some of the most jaw-dropping immersion I’ve ever seen. Felt like a kid again watching T2 for 1st time. Astounding. pic.twitter.com/cfiMADJzU4

The rest of Planet Earth gets to decide what they think on December 16. See more reactions below.

James Cameron now has not two but THREE of the best sequels ever made. AVATAR: THE WAY OF WATER is incredible. The effects and action is, yes, breathtaking. But it is the story this time that’s the beating heart. It’s more personal, complicated, emotional. Wow, it really soars. pic.twitter.com/P5aA7dqG0U

AVATAR: THE WAY OF WATER introduces a new water culture on Pandora that is technically wondrous. James Cameron’s dialogue still struggles but his storytelling soars as he emotionally invests us in the new characters & creatures. A sincere, stunning epic that was worth the wait. pic.twitter.com/ZUqdJ4Nawd

As someone who LIKED — but didn't LOVE — the first AVATAR, let me tell you:

AVATAR: THE WAY OF WATER blew me away.

Vastly superior in visuals, story telling and performances, the sequel left my jaw on the ground for the entire runtime.

James Cameron is the GOD of sequels. pic.twitter.com/1cw6C94O4f

Have now seen #Avatar twice and am overwhelmed by both its technical mastery and unexpectedly intimate emotional scope. Yes the world is expanded and sequels teased but the characters are most important. Cameron is in top form, especially in final act. Good to have him back. 🐟 pic.twitter.com/PR9drN5Zph

I say it again: Avatar 2 – seeing it you realize how long it has been since you saw a MOVIE-MOVIE (like that, in caps).

Avatar The Way of Water: lol imagine being dumb enough to bet against James Cameron. or teen alien Sigourney Weaver. or giant whales subtitled in papyrus.

light years better than the first & easily one of the best theatrical experiences in ages. streaming found dead in a ditch.

Happy to say #AvatarTheWayOfWater is phenomenal! Bigger, better & more emotional than #Avatar, the film is visually breathtaking, visceral & incredibly engrossing. The story, the spectacle, the spirituality, the beauty – this is moviemaking & storytelling at its absolute finest. pic.twitter.com/RicnpDghrx

Only in #AvatarTheWayOfWater could James Cameron get away with paying homage to both FREE WILLY and APOCALYPSE NOW in the same movie. A technical spectacle that continues to raise the bar on effects driven vehicles. About on par with the first. The kids are stars. pic.twitter.com/zhx6ZNYm9R

Yes. Avatar for Pic, Director, probably screenplay. It is going to make money in every country …probably to a mind-blowing degree. As the most expensive movie ever made he puts it all on the screen. It's deeply moving, heart-crushingly beautiful and easily one of the boty. https://t.co/PY5spEcove