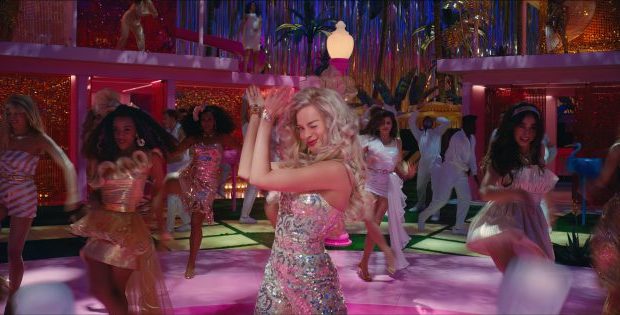 So how in the heck are they going to make a “Barbie” movie? The plot of Greta Gerwig’s upcoming film, which stars Margot Robbie as the titular toy and Ryan Gosling as her beau Ken, is still a mystery, but a teaser trailer released on Friday gives us a sense of the tone—clever and fun.

Aping (ha!) the “Dawn of Man” prologue of Stanley Kubrick’s “2001: A Space Odyssey,” the teaser shows a group of moppety little girls playing with dolls somewhere in the prehistoric desert, stuck in the doldrums of boredom. A voiceover (provided by Helen Mirren in the classic tone of “nature film”) explains that since the beginning of time, little girls have always played with dolls, but they were always baby dolls. Harrumph!

Richard Strauss’s “Thus Spake Zarathustra” booms on the soundtrack and then, echoing the famous shot in which the eerie black monolith appears, we see the enormous presence of Margot Robbie in a bathing suit, lowering her sunglasses to wink at the flabbergasted youngsters at her feet and us. Just as Kubrick and Arthur C. Clarke’s moon watcher used a bone to create the first tool, we see one of the girls smash up a tea set with one of her boring baby dolls, then hurl it to the sky. The famous match cut in space shows us the title treatment, the music turns to disco, and there are a few candy-colored shots from later in the film, including images of Issa Rae, Simu Lius, and Gosling’s Ken (in some fringed vest.)

We are then reminded that “Barbie” is written by Gerwig and Noah Baumbach and is “Based on ‘Barbie’ by Mattel,” and will be out next July 21, (the same day as Christopher Nolan’s “Oppenheimer,” thus the most significant day in all of cinema).