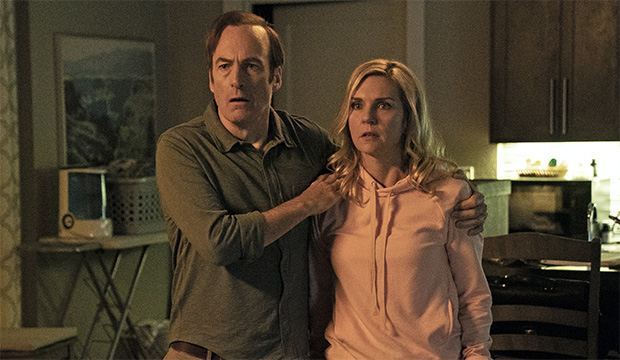 The extended sixth and final season saw the timelines of both series collide and ended with a greyscale exploration Jimmy’s life beyond “Bad”. It touched on themes of redemption, regrets and choices. Spin-offs rarely impress and final seasons often disappoint, but “Saul” ended with critical favor comparable with that of its predecessor. The final season scored an impressive 95 on Metacritic.

“Saul” has received 46 Emmy nominations over the years and won… none! At SAG it has also failed to pick up a gong and has been less successful with nominations. Perhaps being overlooked by the TV academy could add some fuel to the show’s overdue status. There are three SAG categories where “Saul” looks competitive for its final season.

For Best TV Drama Ensemble, “Better Call Saul” has received two past bids. When the cast was nominated for the fifth season, they lost to “The Crown.” That royal show returns this year as does last year’s winning ensemble from “Succession.” It will be a tough race. However “Saul’s” diverse cast, including Jonathan Banks, Giancarlo Esposito and Patrick Fabian, makes it a contender.

It’s worth noting that “Breaking Bad” was never as successful at the SAGs as the Emmys, but they finally won ensemble for their final season. The “Saul” cast will be hoping they can follow suit.

The show’s best shot could very well be Bob Odenkirk for TV Drama Actor. The actor delivered a performance for the ages in the season finale and has picked up four nominations in the past. Last year’s winner Lee Jung-jae from “Squid Game,” who also bested Odenkirk for the Emmy last month, will not be back this year. Last time he was nominated, the “Saul” actor was edged out by Jason Bateman from “Ozark,” who is eligible as well. However, Bateman’s win shows SAG voters have rewarded actors known for their comedic chops making a dramatic turn. Perhaps that will work for Bob this year?

Then there is Rhea Seehorn who scored her first Emmy nomination this year. She has previously not received an individual SAG nomination. A key factor is likely that at SAG there is just one category for TV Drama Actor, so she has to compete with leads. In the final season she is as prominent and powerful as she has ever been. It also helps that last year’s winner — HoYeon Jung for “Squid Game” — will not be back.

So can “Saul” get a fitting send off at the SAG awards this year? It’s the guild’s last opportunity to award the show. And hopefully they will not see this iconic show’s run out with as many regrets as Jimmy McGill.