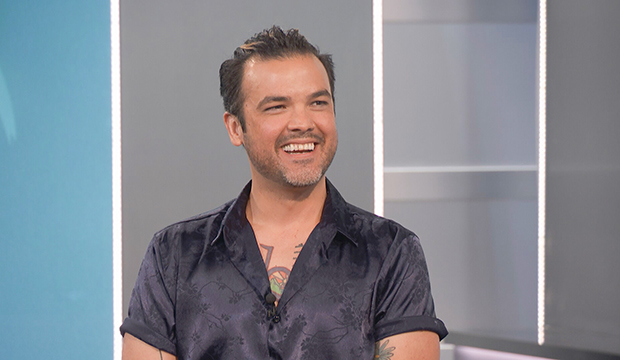 Daniel Durston implored his fellow houseguests to evict him in his speech on Thursday’s “Big Brother 24” before calling them clowns and boring, and they happily obliged as they were going to evict him anyway (well, except for Terrance). The Las Vegas performer was booted by a vote of 8-1, marking the third straight week that The Leftovers took out someone who was gunning for Taylor earlier in the game. The Leftovers, of course, formed after Daniel yelled at Taylor in the bathroom and told her not to talk to him until finale night.

How does he feel about that incident? And does he regret using the Veto last week that opened the door for his BFF Nicole to be backdoored? We caught up with Daniel below.

Gold Derby: Your speech was a doozy. What kind of impact do you think it’ll have on how people play going forward?
Daniel: I feel like a lot of people are not paying attention to how great of a player Michael is. As a fan, I was, like, geeking out that I got to play the game with what I think is one of the best players in a long time. But I feel like even with people who are aligned with him, it’s crazy that they are letting him fly under the radar like this. But maybe they have a master plan in line. Hopefully, I got to spark awareness as to how great of a player Michael is and how sweet and loving and great of a player Monte is, and to get them out. Because they’re both the reason I’m out here now.

Gold Derby: Five wins in five weeks is a lot.
Daniel: Yeah! One a week! It’s wild! [Laughs] Sometimes it’s twice in one week, but average is one a week. It’s insane!

Gold Derby: You said you don’t take responsibility for Nicole’s eviction because you weren’t the HOH, but you did use the Veto when Monte told you not to and he was actually telling you the truth because their plans had changed. Did you at any point think, “Maybe he’s not lying to me and Nicole really doesn’t have the votes to stay”?
Daniel: I fully can see through a lot of Monte’s lies, so at the time, I was like, “This definitely is a ploy.” He told me [he wanted to boot] Alyssa and I believe it because I think they want to break up the showmance. Even Kyle didn’t have a rebuttal when I said, “He wants to break up the showmance.” I went through it over and over with Nicole while she was in the house that we needed to do this move in order to keep the numbers if Alyssa and Indy were going to ride with us. And if we were going to be sent home, we were going to be sent home anyway, so I have to use the Veto and hopefully it works out in our favor. And it didn’t. So once Nicole went home, I knew I was next.

SEE ‘Big Brother 24’s’ Nicole on her treatment of Taylor: ‘I wish I could take those back’

Gold Derby: You had to sacrifice her.
Daniel: Yeah, and I was like, “Hey, you know what? I’ll see you in the outside world anyway.”

Gold Derby: Your bathroom blowup with Taylor was the final straw that led to the formation of The Leftovers. Do you regret anything you said to her?
Daniel: Absolutely. When you’re in there, your emotions get the best of you and everything’s pressurized and everything runs through the roof. So, in that moment, honestly, looking back, I wish I could’ve removed emotion and actually just ask them in front of each other and find out what really happened as opposed to just fully trusting Nicole — although I do, but maybe she misheard as well. But maybe we could’ve gotten to the bottom of it and talked it out.

Gold Derby: Do you hope to speak to Taylor after this and hash things out?
Daniel: Yeah, even in the house, we had smoothed things over — I’m sure that’s not aired — talking about how after the finale, we definitely want to touch base. No matter what’s shown TV, we have to talk to each other. And already I have things, without even seeing it, that I want to look at and make sure that I apologize directly about.

Gold Derby: The past couple of weeks you’ve been saying that these people don’t know how to play the game and they’re sheep and you have to teach them how to play the game. The Leftovers started after the bathroom incident. Do you consider that playing the game?
Daniel: Yeah, it’s one version of playing the game. I’m not a fan of mass alliances. That kinda sucks as a superfan. I’m like, “Ugh, another season where a mass alliance takes over and it’s not fun or interesting.” That is their version of playing the game, of course. I just felt like I had to teach a few people how to play the game strategically and it seems like that still stands. I dunno. I can’t wait to watch it back and see who actually knows what they’re doing.

Gold Derby: You also tried to blow up Kyle’s game to Alyssa on your way out yesterday. Do you think she believed you?
Daniel: I think she think believed me in the moment, but in that house, you forget what happened the next day because it feels like a week has passed. And because her head’s in the clouds with Kyle, I think, by today, she completely forgot what I said and I think it’ll hit her when she’s on the block and his own alliance sends her home. Because they want to — they wanted to keep the noms the same when I had the Veto. Even Kyle wanted to keep the nominations the same, so he’s clearly in on breaking up his own showmance.

Gold Derby: You were making promises to Michael this week in your one-on-ones. Had you stayed and become HOH, would you have kept your word or were you just telling him what he wants to hear in that moment to fight for your life?
Daniel: I was ready to keep my word because I respect him as a player and he’s such a big target that if I kept him around a little longer, he’d be the bigger target in front of me. Of course, at some point, I would’ve turned on him as far as, like, the rest of the season. But he’s a superfan. He knows what I was saying, but I really meant it that as long as besties are around, we’ve got your back. I told him one-on-one, “I have you from here on out.” I do mean that as far as the next four to five weeks, but we would’ve had to turn on each other at some point anyway. But I meant what I said.