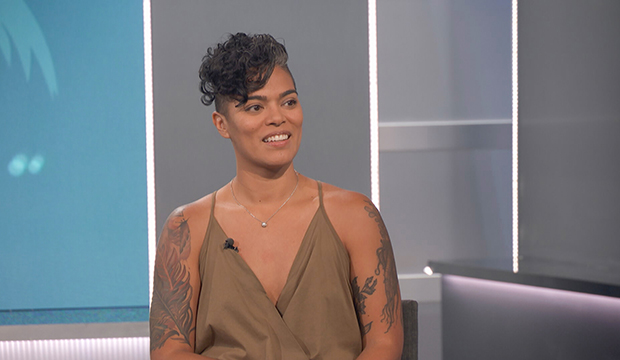 Another week, another houseguest getting Pooched. Nicole Layog was evicted 9-1 on Thursday’s “Big Brother 24,” but it didn’t have to be this way. The Leftovers changed course after the Veto and wanted to keep Indy and Alyssa on the block, with plans to boot the latter, but neither Nicole nor her BFF Daniel believed Monte when he told them that Nicole wouldn’t have the votes to stay if she were on the block with Taylor. And in an ironic twist of fate, Daniel used the Veto, allowing Monte to renom Nicole and Taylor for The Leftovers to execute their original plan of backdooring Nicole.

We caught up with Nicole to get her thoughts on Daniel ensuring her eviction and if she regrets her treatment of her festie bestie Taylor in the house.

Gold Derby: You were actually safe this week because Monte was telling you the truth that he wanted to keep you and Michael confirmed it in his message. How do you look back on that situation and Daniel being the one to seal your fate because he wanted to use the Veto?
Nicole: I mean, all I can say is I thought I was taking a big risk with a big reward. [Laughs] And I just never believed a single word that came out of Monte’s mouth. I think that, if going back, if maybe he would’ve had that conversation with me alone without Daniel there, I think it would’ve gone over a bit better with me. But, you know what, it’s “Big Brother” and I got Pooched.

Gold Derby: So much Pooching this season.
Nicole: Oh, yeah, I mean, he set the standard and it’s pretty high!

Gold Derby: Daniel always seemed more adamant about using the Veto than you. Was there any part of you that thought maybe Monte was telling the truth?
Nicole: There was because there was part of me that thought Jasmine was lying. We’re in a situation where Ameerah went home and I was blindsided about that. I can’t wait to see the video footage from that and see everybody’s shocked — or see those of us who voted to keep her and our faces. But after that, I felt like I couldn’t trust anybody in the house, so of course I was trying to trust Daniel more than anybody because I felt like he was the only one that was being honest with me at the time.

Gold Derby: You said you played your alliance’s game in targeting Taylor. Last week, Turner said he wasn’t going to renom Taylor because everyone was bashing her, and The Leftovers formed after your bathroom blowup with Taylor and Daniel. Do you regret anything you said to or about Taylor?
Nicole: Do I regret anything? Anything that I said to or about Taylor, I do wish that I could go back and really see and hear what I’ve said because I’d love to address all those things with her. I wish that I didn’t say that I’d be able to manipulate her and control her game going forward. Those are pretty strong statements to stay. And I wish I could take those back, but I can’t. Going forward, I hope that I’m able talk to her when she gets out and continue to address those things with her.

Gold Derby: At the beginning of the week, you were very confident you had Kyle’s vote. What do you think of him starting The Leftovers?
Nicole: [Laughs] Kyle! Oh, Kyle! My little Kyle! I wish that I could just read him a little better, but he played the very naive, dumb card very well. I was like, “This kid, how does he not know what’s this game is?” But he did a really good job. He tricked me and Daniel.

Gold Derby: He got by your detective skills.
Nicole: I think he tricked Daniel more than I felt he tricked me. After our first conversation in the tiki room, I was like, “Something’s up. This isn’t adding up. He’s being very standoffish.” He had sunglasses on when he spoke to me at 3 o’clock in the morning, so I felt like something’s going on. I definitely didn’t feel 100 percent confident after all my conversations that I had had after I was put on the block.

Gold Derby: How do you think Daniel will do without you? He knows he’s the next target.
Nicole: I hope that he’s able to control his emotions better. He wears his emotions on his sleeve and I think that that might get him in trouble. But I also feel like a couple people might wanna keep him around because they know he’d be going for the bigger targets if he stays in the house.