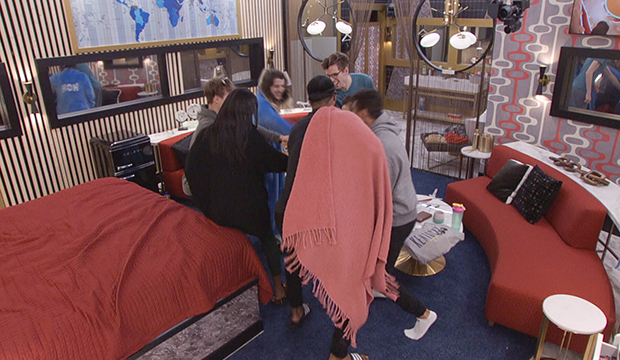 Wednesday in the “Big Brother 24” house brought about the usual last-minute campaigning and check-in for votes — but only by one of the nominees — but nothing’s changed. Ameerah is still set to walk out the door on Thursday and The Leftovers might just come out of this unscathed.

Ameerah is so confident she’s got the votes that she did not lift a finger on Wednesday, just chillaxing and completely oblivious that has less than 24 hours in there. This is going to be the best blindside since Austin had to walk out barefoot in Season 17. Terrance, on the other hand, did the rounds, with most people hemming and hawing. Nicole and Daniel wanted to toss him a sympathy vote if they know there are enough votes for Ameerah to stay. Nicole then broadcasted to a bunch of people that Terrance needs to be told that he’s leaving and she should be the one to tell him. She put on quite a show here, telling Terrance that he is her soul mate and her No. 1 in the house, even though everyone and their mother knows she spends 24/7 with Daniel, and that she and Daniel really want him to stay. And then as a farewell gift to Terrance, she gave him the honor of knowing her little secret: She was a cop for 10 years. Terrance told her that’s a great skill because she can “detect the bullsh–.” “It’s all bullsh–,” Nicole said. “They are the worst liars.” You really can’t write this any better.

SEE ‘Big Brother 24’ spoilers: All signs continue to point to another blindside on Thursday

Terrance later checked in with Turner, who suggested that Terrance may be staying and told him not to say anything. That opened the door for Terrance to vent about Nicole’s sketchiness. He thinks there’s an alliance between Nicole, Daniel and Ameerah because “how can you say you want me to stay but I don’t got your vote?” Terrance and Ameerah then compared notes, with the latter saying that she heard Nicole and Daniel were voting for Terrance to stay and that “sh–‘s f—ing weird.” He played dumb and said his stuff is packed. Jasmine shared Terrance’s recap of Nicole’s heroic heads-up to Monte and Ameerah and how Nicole said that the girls and Monte were keeping Ameerah so she’s got to vote with the house, making herself look like the good guy here trying to save Terrance. “She lies a lot,” Ameerah said. Monte relayed this to Joseph and said Nicole is now the next target because she’s playing dirty.

Nicole’s arrogance is gonna come back to bite her and you can’t say it’s not deserved. This is also exactly what the doctor ordered for The Leftovers, who continued to cover their tracks. Nicole’s aggressive gameplay is irking her own allies, who may just blame Ameerah’s blindside on her. Assuming nothing happening Thursday morning, this will be one of the most delicious blindsides in “BB” history.