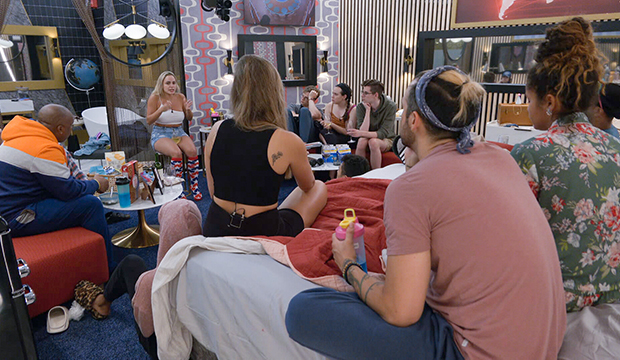 Well, well, well, we may finally have an interesting game on our hands on “Big Brother 24.” A lot went down over the weekend that the house is now divided with a major blindside in the works to backdoor Ameerah.

Michael and Brittany won Veto on Saturday, paving the way for the planned backdoor of Taylor, but things started to shift as the guys — specifically Kyle and Joseph — started putting two and two together and seeing that it didn’t equal four. There were two arguments between Taylor and Nicole, and Taylor and Daniel when feeds were down on Saturday. Nicole had been crying and Taylor basically said she’d support her no matter what, which Nicole retold to people as Taylor suggesting she’d quit. Daniel, meanwhile, Taylor that she was to blame for what happened to Paloma. These two, high on their own supply. At the same time, Alyssa, still infatuated with Kyle, informed him of her new alliance, Old Skool, which has her, Jasmine, Nicole, Daniel, Terrance, Ameerah and Indy.

Red flags. Kyle relayed this to his Pound alliance members Joseph, Monte and Turner, and they realized that Ameerah has been the mastermind of the other side of the house and that that group’s vile treatment of Taylor has been totally unjustified because they’ve been twisting her words to demonize her. Kyle and Joseph pushed to reel in Michael, Brittany and Taylor to draw a line in the sand now and make a move against Old Skool. They pulled in Taylor last, telling her everything that’s happened in the last two weeks and how Nicole picked her as her bestie to basically ensure that she’d be evicted. And then in the wee hours of Sunday morning, The Leftovers was born.

The Leftovers’ first mission is for Turner to renom Ameerah and Terrance at Monday’s Veto ceremony, with the former being the target. They want to decimate that side with Daniel and Nicole as the next to go. Kyle and Monte also decided they must come clean to The Leftovers about Po’s Pack because Ameerah will use it as leverage. Michael and Brittany told each other about Po’s Pack and Girls Girls Sunday night.

Old School has no idea what’s coming. They fully expect Turner to renom Taylor and Nicole so they can finally boot Taylor. They’re so confident that they’re running the house that Alyssa said to Jasmine and Ameerah, “I don’t think there is ever a scenario where the three of us wouldn’t make it to jury.” Gurl, just you wait. Taylor acted mopey all day like she expected to go on the block and apologized to Nicole for their blowup. Nicole remained condescending and rude, scolding Taylor that she was still in the wrong. “Whatever happens after this veto meeting, I think we both are going to have to fight for our life. It’s a reality we are going to have to face tomorrow. I don’t hate you. I just think that our path together in this game is going to be on a business level,” Nicole said. Oh, yes, it will be.

So, yeah, stock up on the popcorn because there will surely be mass chaos after the Veto ceremony on Monday afternoon.