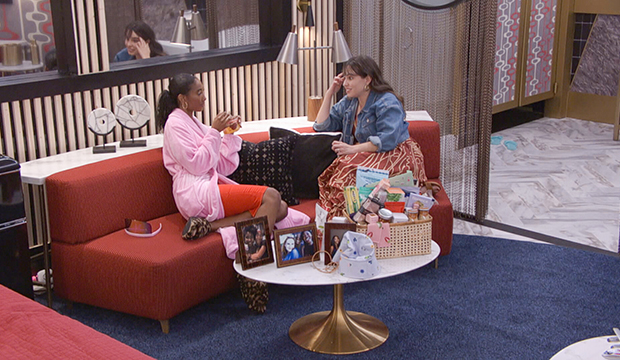 The lazy final days of “Big Brother 24” are upon us and they’re even lazier this time around since the Veto was fast-tracked but not the whole week. But it’s highly unlikely the extra time will make Monte change his mind about evicting Brittany. He did have a change of heart about something else though.

On Sunday, Brittany and Taylor spent a lot of time brainstorming ways for them to each pitch Monte separately to keep Brittany with M&Ms and whatnot. It’s a Sisyphean task because it simply makes no sense for Monte’s game to keep her. He knows Turner will take him to final two, whereas Brittany would’ve probably cut him had she won the Veto (Brittany, always the bridesmaid, never the bride in so many comps this season). Taylor should just move on from Operation Save Brittany and focus on the final three. It’s a sinking ship and she needs to cut her losses and jump. Later, she counted votes herself and remarked of Monte and Turner, “I have to be getting played by them. He’s not stupid, I have to be getting played.”

Related, the other “big” thing that happened on Sunday is that Montay is over after less than a week. This all started with headphonegate. Monte got peeved when Taylor snatched headphones from him and vented to Turner after he sorta but not really asked Monte if they were hooking up. Monte said he doesn’t really see him and Taylor lasting IRL (Monte’s last name is also Taylor, so there’s the slimmest of chances she could be Taylor Taylor) and doesn’t like how she presents differently in public vs. private, which is an insane complaint since everyone acts differently in different situations and with different people. That’s just human nature. Monte and Taylor were cool with each other the whole day, and after Monte move his stuff back downstairs, he and Taylor had a chat in the wee hours of the night about all their issues. He told her that she can be cold and rub people the wrong way. She apologized and said she would never intentionally hurt someone. They agreed the timing of their showmance was bad and they should cool things and be friends first.

It could be interesting if this breakup affects either of Monte’s or Taylor’s final two plans, but it’s a no-brainer who he’s cutting this week.