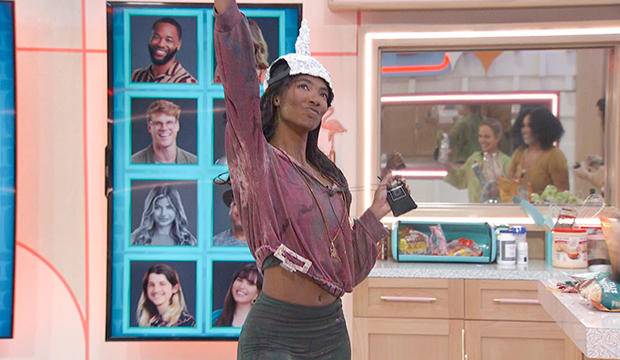 This should’ve been an easy week for The Leftovers on “Big Brother 24,” but it got super complicated for no reason even if the nominations are going to remain the same.

Kyle won the prize and punishments Veto on Saturday and has been adamant about not using it at the Veto ceremony on Monday, so the nominees will remain Terrance and Indy. But the plan is now to boot Indy on Thursday and it was a circuitous route to get there. After Taylor decided on her noms, Joseph came up with a harebrained idea for him to be the renom as a way for them to distance themselves and for her to put up a big threat who wasn’t Monte, which is whom the other side thinks her target it. Because she keeps telling them that. They eased off that dumb plan after Taylor’s punishment was to be tethered to Joseph for 48 hours (this hasn’t happened yet). The other prizes and punishments were Alyssa getting $5,000, Jasmine winning a trip to London (she asked if it was out of the country), Indy getting a pink unitard costume, and Terrance getting 182 temp tattoos (Ink 182). The Leftovers then shifted the target to Indy before the group sans Kyle landed on booting Alyssa (since Taylor refuses to touch Jasmine), citing her showmance with Kyle and the fact that she took a prize from Taylor during the Veto. Taylor’s plan was to spin it as Alyssa was getting too comfortable in the house and too confident she was safe (well, you did tell her she was safe).

The problem, of course, was getting Kyle to agree to the plan. Michael and Brittany, who’ve been trying to plot a post-Leftovers life for weeks, were very much on board with evicting Alyssa, but when Kyle was obviously like, “I’m OK with getting rid of Alyssa, but not right now,” they shifted to his side. Complicating matters is that Kyle and Alyssa had sex on Saturday in the Have-Not room on a floatie (her back was also hurting Sunday, she said, from working out). She told Turner this, completely unsolicited, and was worried about what things will be like going forward. Turner told Kyle that he knew, and Kyle was basically like, “I think we need to go on a break.” Turner also told Monte without spelling it out and spilled to Joseph early Monday morning, so it’s a matter of time before everyone knows. Kyle and Taylor had a powwow, during which he explained why he didn’t want to be responsible for Alyssa’s backdoor but claimed he’d be fine nominating her himself in the future. Somehow, Taylor bought this, but she also let it drop that Michael and Brittany were very pro-evict Alyssa, which surprised Kyle, who said they were the opposite. Taylor later straight-up asked Michael and Brittany about it, who equivocated. Brittany literally said, “I don’t recall.” If these two want to play double agents, they better work on their lies.

SEE ‘Big Brother 24’ spoilers: The Week 6 HOH tries to figure out a pawn

Kyle also made life hard on himself by telling Indy as late as Sunday afternoon that he was using the Veto on her before later saying he was having second thoughts because he felt like Alyssa would be the renom. The Convenience Store girls all checked in with Taylor, who insisted that Monte was still her target and she doesn’t see why Kyle wouldn’t use the Veto. A great setup to throw Kyle under the bus. Alyssa even apologized to Taylor for taking the prize for good measure. The Leftovers had their usual late-night/early morning meeting, during which Kyle vehemently laid out his “reasons” for not targeting Alyssa this week. Drink every time he says, “I don’t see the value in that.” He noted that Indy has been telling people to vote her out if she doesn’t come off the block and that she’d rather go home than to jury.

Taylor has also mentioned multiple times how she wants to get rid of Jasmine, which is what her entire alliance wants, but she can’t go back on her word not to target a Black woman. There was also Balloongate on Sunday between Jasmine and Turner. She said she wanted to release a balloon on Wednesday for her birthday — which she has been talking about for 84 years — to honor her late father, who had the same birthday, and Turner asked if she had considered an alternative because releasing balloons is bad for the environment. As you can imagine, Jasmine did not take too kindly to that (his retell of it is gold). Also, bold of Turner to think that Jasmine would put something besides herself first, considering how the entire house has to wait on her hand and foot, and she never cleans up after herself. Turner apologized, and you could tell he desperately wished there was some way for Jasmine to go home this week.

Now we have #BalloonGate:
Jasmine wants to release a balloon in honor of her dad's birthday. 🎈

Check out her face when Turner points out that balloon releases are bad for the environment. 😆#bb24 pic.twitter.com/sTC82qJgnN

In the end, The Leftovers agreed that noms will stay the same and Indy will go. Kyle said he will take the heat from the other side for not using the Veto. Taylor still wants Alyssa to go, but there is nothing she can do without Kyle. Taylor is a very nice girl who did not deserve the unjustified hatred she got for the past month, but she is not a good HOH. Both things can be true. At least she’s aware she’s not great at this. She seems to want the perks of HOH — the room, the letter, the Lay’s — without having to do the hardcore scheming to get someone out. Really, she’s not a good strategist — over-promising safety to people who’d never reciprocate it — and can be easily swayed into a new idea, which her allies have definitely noticed. It feels like a lifetime ago that she wanted Terrance out. This is a messy HOH — bad for her, but highly entertaining for us.