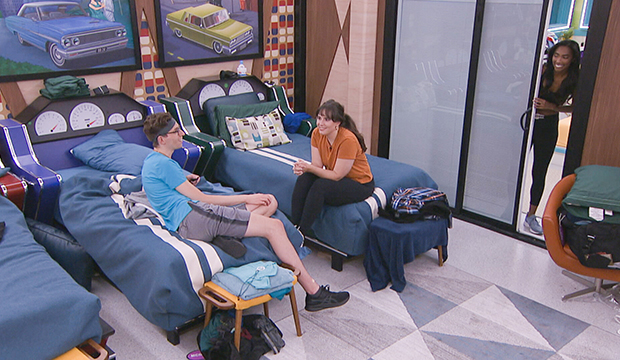 Hard to believe after the past three weeks, but we’re in store for another blindside on “Big Brother 24” this week. It’ll be at Monday’s Veto ceremony, where Michael, who won Veto — which was OTEV — and Brittany are expected to take Monte, Joseph and Terrance off the block, and Michael will renom Daniel and Kyle. What’s so surprising about that since that was the plan? Well, in the non-Leftovers’ minds, it has changed.

While Daniel was the original target, Michael, worrying about his long-term game, was entertaining the idea of sending Monte home and breaking up The Leftovers way earlier than anticipated. This would be bad since they’re not even at jury yet and Michael should be more worried about his comp wins, which stand at five now. Kyle, who is a completely different player since he started showmancing Alyssa, has started to show cracks. He also presented Michael a harebrained theory: He thinks all the POC are working together for a Cookout 2.0, so he feels maybe they should keep Daniel this week for the white people — him, Michael, Brittany, Alyssa and Turner — to have another number. Nothing remotely problematic about this at all. He also seems to have forgotten that almost everyone was bashing Taylor for weeks.

Kyle’s theory was totally crushed after Veto on Saturday, during which, according to Michael, Terrance told Michael that he has to win it and they’ll “talk later.” Separately, Jasmine and Terrance pitched hard to Michael and Brittany that they think noms should stay the same so they can take out a big threat like Monte. Jasmine even listed the five votes they would need to accomplish it: her, Alyssa, Indy, Daniel and Brittany if she’s on board. Michael and Brittany saw through all the B.S. and repeatedly proclaimed “We knew it!” Jasmine’s and Terrance’s aggressive pitching confirmed to them that the other side was aligned and that Monte and Joseph were not working with them — Monte and Joseph had already shared that the girls kept proposing alliances to them — so they want Michael to keep noms the same to take out Monte. After this, Michael was fully back on the Daniel plan, remarking that taking out Monte is a flashy move, but he came here to make smart moves.

“Smart” is not the first word that comes to mind when describing the other side. Jasmine proudly reported to Indy and Alyssa that she convinced Michael to keep noms the same and target Monte, and urged them to say they’re on board in their one-on-ones. Terrance is playing both sides and completely overdoing it and has no idea he’s exposed himself. He spent Sunday clueing others in on the “evict Monte” plan, including Joseph, who played along. Daniel, meanwhile, is thrilled because he did his own campaigning to Michael, who was obviously not giving anything away, and he believes he has the votes to stay. “We need four and Michael splits the vote, but Brittany makes it five,” he cam-talked. “Holy sh–. I thought I was going to pack my bags.” You are.

Michael has considered telling everyone he’s using the Veto before the ceremony to see if anyone will spill any more game, so that is still a possibility on Monday morning, but as it stands, the other side is in for another blindside. This is reaching FOUTTE levels now. Both Jasmine and Terrance really think they’re doing something here and were responsible for the “flip,” while Daniel is convinced he’s safe, so the bigger question might be, who will be more shocked when Michael uses the Veto?