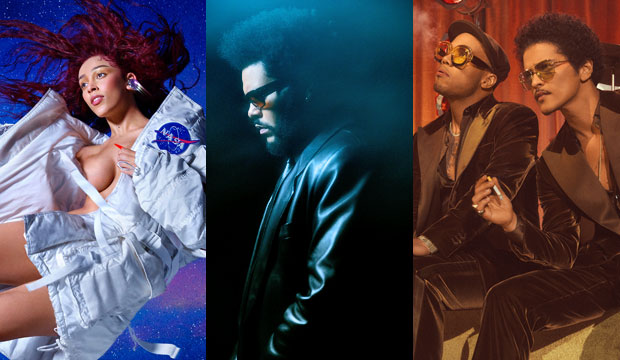 The Billboard Music Awards are on May 15, honoring the most successful music for the past 12 months based on their chart performance. While many default their predictions to whatever topped Billboard’s Year-End charts, it’s important to remember that the BBMAs eligibility period ended on March 26, 2022, which was several months after 2021’s Year-End charts were calculated, making space for some upsets. Let’s take a look at the biggest contenders for this year’s ceremony in R&B categories.

As the number-one R&B artist of 2021 according to the Year-End charts, The Weeknd is probably the front-runner here. However, the extra months in the BBMAs eligibility period could really help put Doja Cat ahead. While The Weeknd had a whole album out in early 2022 (“Dawn FM“), Doja Cat’s success from 2021’s “Planet Her” album just got bigger, with two more hit singles (“Woman” and “Need to Know”) after the Year-End charts were released. As such, one could make a case for a Doja Cat upset here. I’ll go with The Weeknd, but it’s really a two horse race.

Again, The Weeknd had such a massive year chart-wise that it’ll be hard to top him here. He ended up as the number-one Top R&B Artist according to Billboard, and he has charted more songs since the Year-End chart with his recent album, “Dawn FM.” He has also managed to extend the success of his 2020 album “After Hours,” notching the second biggest hit of 2021 with “Save Your Tears” (featuring Ariana Grande).

This should be an easy win for Doja Cat. Chart-wise she’s the biggest artist here. Her only competition is arguably Summer Walker, but “Planet Her” has had more longevity than Walker’s “Still Over It,” and Doja Cat’s record has charted higher for most of the year even though it came out more than four months before “Still Over It.” As such, expect a Doja Cat win.

This category has to go to Doja Cat’s “Planet Her.” The album is easily the most successful out of its competition and spawned a plethora of viral hits. It also includes the cross-format hits “You Right,” “Woman,” “Need to Know,” and the Grammy-winning “Kiss Me More.” Summer Walker’s “Still Over It” is the likeliest to upset, being arguably the biggest moment in R&B besides Doja’s “Planet Her” era. But still, I’ll be shocked at a Doja loss here.

Fresh off four Grammy wins, Silk Sonic is likely to collect yet another award this year in this category. “Leave The Door Open” ended as the top R&B song of 2021, and none of its competition here really had much of a rise after the 2021 Year-End charts were decided. Justin Bieber, Daniel Caesar, and Giveon’s “Peaches” could maybe put up a fight (it was number-two on the Year-End chart), but “Door” feels like a solid bet.