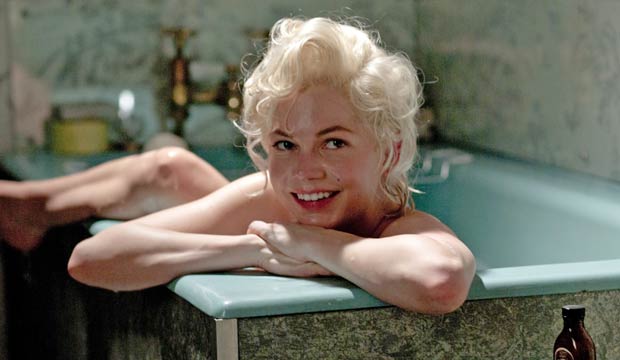 What becomes a legend most? Well, in the case of Marilyn Monroe, it’s countless books, feature films, TV movies, limited series, documentaries and even a Broadway musical. “Blonde,” the latest film about the influential sex symbol, who starred in such films as 1953’s “Gentlemen Prefer Blondes” and 1959’s ‘Some Like it Hot” and tragically died at the age of 36 in 1962, has been polarizing critics and audiences since it premiered at the recent Venice Film Festival.

Based on Joyce Carol Oates’ best-selling 2000 novel, “Blonde” offers a fictionalized look at the troubled actress.  Currently in theaters and streaming on Netflix, “Blonde” stars Ana de Armas. She has been singled out by critics for her work, but director Andrew Dominik (“The Assassination of Jesse James by the Coward Robert Ford”) hasn’t been so lucky. “’Blonde’ has been conceived as a slow-motion death march,” said the L.A. Times Justin Chan.

The near three-hour film isn’t the first adaptation of “Blonde.” Back in 2001, CBS presented a miniseries starring Australian actress Poppy Montgomery as the sex symbol. Though it didn’t receive any Emmy nominations, Variety was impressed: “Director Joyce Chopra and author Joyce Carol Oates…teamed previously on the small feature ‘Smooth Talk’…The result here can be surprising in depth of its dark examination into the psyche of its subject, so while it has plenty of weaknesses, the mini accomplishes far more than most of its ilk.”

Though Monroe never received an Oscar nomination — she earned two BAFTAs and won three Golden Globes — Michelle Williams did for playing the actress 2011’s “My Week with Marilyn.” Williams captures not only the fragility of Monroe, but also her charm, effusiveness and talent. She creates the icon known as Marilyn Monroe without losing sight of Norma Jean Baker. Williams won numerous critics honors for her performance, as well as a Golden Globe and Film Independent Spirit Awards.

Catherine Hicks (‘7th Heaven”) earned an Emmy nomination for her indelible turn as in the well-received “Marilyn: The Untold Story,” which aired on ABC in 1980. Wrote Stephen Lynch in “The Biopic Story” blog: “For a generation to TV viewers, this biopic was the quintessential representation of Marilyn Monroe. Though Catherine Hicks bore little resemblance to the star, her portrayal of a playful yet manipulative sex symbol cast new light on the iconic figure, revealing she was much more than ‘just another dumb blonde.’”

Eleven years later, ABC returned to the Marilyn well with the snooze “Marilyn & Me,” based on Robert Slatzer’s book in which he maintained that when he was a young writer, he was briefly married to Monroe in 1952. The big problem was that he had no proof of a union such as a marriage license. Jesse Dabson played Slatzer, while Marilyn impersonator Susan Griffiths portrayed the ingenue. “It’s a cute story,” Griffiths told me during a 1991 L.A. Times interview. “It’s a love story. I think it’s a delightful way to see Marilyn. There is so much heaviness involved in Marilyn, it’s refreshing to see one of our superstars in a light-hearted way.”

Ashley Judd and Mira Sorvino both play the actress in HBO’s 1996 drama “Norma Jean and Marilyn,” with Judd playing the ambitious starlet and Sorvino portraying the star. The New York Times found the concept rather ill-conceived: “Such a film is bound to be brilliant or loopy, and this one is even more outrageous than it sounds. Ms. Judd doesn’t disappear when Norma Jean becomes Marilyn. Instead, Norma Jean sticks around like a bad penny, and the two actresses are often seen side by side while the old self-torments the new.”Still, the Times thought Sorvino’s Marilyn was a “dazzling re-reaction that goes beyond mimicry and rescues Marilyn from cliché.”

Marilyn is simply called the Actress in Nicolas Roeg’s 1985 “Insignificance.” Based on a 1982 play, the alternative history finds four legendary people — Joe DiMaggio, known as the Ballplayer; Monroe; Albert Einstein credited as the Professor and Joseph McCarthy, referred to as the Senator, converging on a New York hotel one night in 1954. And in one of the rooms in the hotel, the Actress and the Professor have long conversations even deciding to go to bed together until the Ballplayer shows up. The L.A. Times’ Sheila Benson found the film to be rather significant-“an intelligent, satiric comedy,” and though she found Russell’s performance brave it was nevertheless “puzzling. Within a single scene she can vary from inspired to abysmal, and back again. (Physically, she’s delectable, but it’s Gloria Grahame she’s a dead ring for, not Monroe.)”