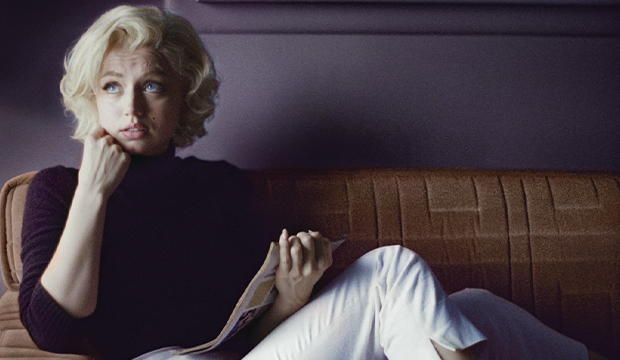 Netflix’s fictionalized take on the life and career of Marilyn Monroe, “Blonde,” hits the streamer on Wednesday, September 26. Based on Joyce Carol Oates‘ novel of the same name, Ana de Armas stars as the legendary actress who tragically died at the age of 36. The film was screened to great acclaim at the Venice Film Festival on September 8, earning a standing ovation that lasted 14 minutes. The cast includes Oscar winner Adrien Brody, Emmy winner Bobby Cannavale, and Emmy winner Julianne Nicholson. The film was written and directed by Andrew Dominik.

With a Rotten Tomatoes score of 52%, the critics consensus reads, “‘Blonde’ can be hard to watch as it teeters between commenting on exploitation and contributing to it, but Ana de Armas’ luminous performance makes it difficult to look away.”

Owen Gleiberman of Variety gives high marks to de Armas for her performance that has already generated Oscar buzz. The actress is “nothing less than what we came for. She becomes Marilyn Monroe.” He continues, “In ‘Blonde,’ we perceive something that’s often said about Marilyn but seldom understood: that the greatest character she ever created was…Marilyn Monroe.” Gleiberman notes that “Dominik may have fumbled an opportunity by not dealing with how the circumstances surrounding her death were covered up, as the government and the press colluded to suppress the story of her relationships with both Kennedy brothers.” In the end, the film shows us what the world failed to see behind the glitz and glam that was Monroe — a woman behind the facade just wanting to be loved.

Marshall Shaffer of Decider starts by praising the film for not presenting a glossy view of the icon’s life, but a stark rebuttal to that approach that has persisted all these years. The critic emphasizes, Dominik “makes it searingly clear that such a belated appreciation is cold comfort to her corpse.” Shaffer adds, “The film’s depiction of sexuality is not meant to titillate, even when Marilyn gets to wield it herself. It’s primarily a blunt instrument of physical force used to keep her in line as she enters and emerges into the industry.” Of de Armas and her potential awards buzz, he writes, “It’s destined for divisiveness but deserves full consideration for its intellectual merits, not just its emotionally enticing looks – just like Marilyn Monroe herself did.”

Jane Crowther of Total Film begins,“The way we consume celebrity and the fact that those who burn white-hot in the spotlight are frequently least equipped to deal with the onslaught is at the heart of Blonde, Andrew Dominick’s gorgeous/grotesque adaptation of Joyce Carol Oates’ fictionalized novel charting Marilyn Monroe’s life.” For her performance, de Armas is applauded as Monroe struggles with the two Marilyns: the one the public sees and the one that is real. “Throw in the impossibility of pregnancy in a business that wants its sex symbols intact, husbands (Bobby Cannavale and Adrien Brody) who can only emotionally or intellectually deal with one facet of their wife, add the voraciousness of fans – and Monroe spirals.” Once we get to JFK, she is a shell of herself. “It’s also sadly apt that Blonde premieres at the same festival that a contemporary female star has been gleefully torn down in the name of entertainment.”

Richard Lawson of Vanity Fair describes the film as an exciting yet cautionary tale of life in the limelight. Monroe is “the stand-in for Britney Spears, Lindsay Lohan, and too many others.” He warns, “The film is a brutal sit, a nearly three-hour-long descent down the misery rabbit hole with Monroe, as she goes from abused and neglected child to nascent star struggling to assert herself.” Yet, we all know the end of the journey, which makes the story even bleaker. “De Armas is fiercely, almost scarily committed to the role, maintaining high and focused energy through every torrent of tears and screams and traumas.” Her lovers are portrayed as being detriments for Monroe’s life. “Joe DiMaggio (Bobby Cannavale) is an abusive simpleton who can’t abide Monroe’s free-spirited artistry, while Arthur Miller (Adrien Brody) is affectionate if detached.” In the end, “the great, vexing question of Blonde: whether it’s a keen and exhausting work of commentary, or if it’s just a demanding fan, asking for ever more from the object of its insatiable fascination until there’s nothing left.”