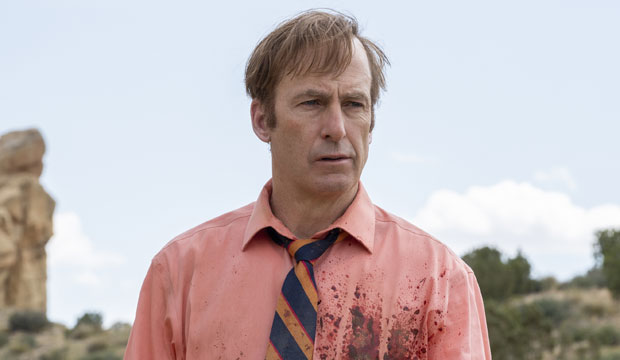 “Better Call Saul” was originally conceived as a comedy series but that idea was short-lived. Then the prequel to the Emmy-winning AMC series “Breaking Bad” was pitched to Bob Odenkirk, who played the chipper and sleazy criminal attorney Saul Goodman, as an hour-long drama.

“In my mind, if you’re going to do a procedural, even I you set it in Albuquerque, you could quite possibly shoot it in Los Angeles,” said Odenkirk during a recent Zoom conversation with the Washington Post. “The idea was every week, Saul has a different client and he solves their cases without going to court. He’s a lawyer who has never set foot in a courtroom.” Then creators Vince Gilligan and Peter Gould decided it would be a one-hour drama shot in Albuquerque. “And I just thought, I just don’t think I can leave [Los Angeles] right now.”

But his son and daughter came to him and convinced him to do “Better Call Saul.” Though they hadn’t seen “Breaking Bad” they were aware of the series. “Their friends had watched it. They knew it was a good show that people liked well, and they wanted me to do it. They talked to me that day and I believed them when they said they would help at home and that it could be okay. So, I took a chance on it.”

He told Gilligan and Gould that they needed to make Saul likeable. “He was a lot of fun in ‘Breaking Bad,’ noted Odenkirk who has just published his autobiography “Comedy Comedy Comedy Drama:A Memoir.” “When everybody else in his vicinity had a gun to their head, Saul was making jokes. It was a laugh to him. He was under no threat. He was a sleazy guy. He doesn’t really take care of anyone. I just think he’s a hard guy to root for if all you see is that version from “Breaking Bad.”

So, they invented Jimmy McGill, whom Odenkirk described as the “man behind the man. He’s a very likable guy who’s got a very earnest side to him. Saul is a cynic, [Jimmy] is not a cynic at all. He’s an idealist whose heart was broken too many times. True cynics have no earnest love for the world left in them or never had any. But he’s a guy who is sort of actively striking back at the world in this persona of Saul Goodman because he feels he’s so wronged and so hurt by some of what’s happened as you see in ‘Better Call Saul.’”

Saul, said Odenkirk, is happy in his work. “There are certainly chapters in his week that are pure joy. He actually gets carried away with the scams that he runs. I think he’s so happy and excited about what he’s going to do that he’s not thinking about the collateral damage of some of the choices that he makes. He’s just carried away and he absolutely having a great time. And so is Kim Wexler, his partner in crime.”

Odenkirk, 59, suffered a major heart attack last July during production on “Better Call Saul.” “I’m great,’ he said of his health now. “Got two stents in my artery and I’ve got medication. Has it changed me? I hope it’s changed me. You like to think you’ll get some kind of life knowledge, some kind of greater awareness, sense of yourself, sense of the world, sense of your mortality. I just think I want to try and put some space in my life. That’s what I got from getting through this-the way you appreciate life is putting a little bit of space in between all your hustle and activity and taking things in and having to rush through interactions with people. I’ve had to rush for about the last four years. I really am a little bit shamed and maybe even a little big angry about that. So I want to change that.”

In his memoir, Odenkirk acknowledges his father inspired a lot of the characters he’s written and played including Saul. “My dad wasn’t around much but he was a powerful influence as father’s are even if they just pop in once in a while and having a screaming argument with your mom. He obviously came home seven times because there’s seven kids. He was funny too, and I think his pissy demeanor, his kind of lack of respect for everyone and certainly anyone in power is kind of a good point of view for a comedy person.’

Odenkirk inherited his dad’s comedic character, but also a not-so-funny quality: the ability to “go from 0 to 80 in three seconds with anger or intense feeling which is not really great. It’s not a great quality in life because you really can upset other people and unnecessarily and you don’t even mean it. But it can be a very good thing in acting to have that degree of movement between your feelings.”