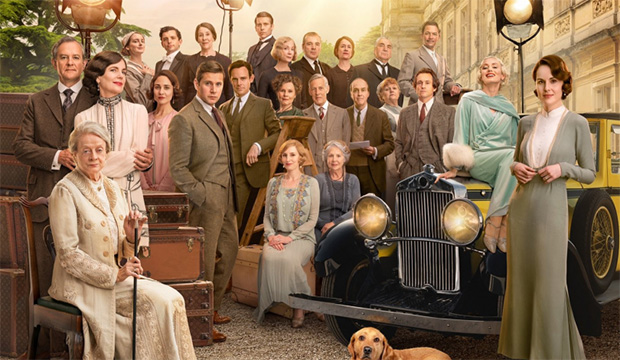 After two weeks as the #1 movie at the box office, Marvel Studios’ “Doctor Strange in the Multiverse of Madness” faces another anticipated sequel, as well as the new genre movie from a respected filmmaking auteur. Read on for your weekly box office preview.

On Friday, Focus Features releases “Downton Abbey: A New Era,” the sequel to its 2019 hit, which itself was a continuation of the popular Emmy-winning PBS series created by Julian Fellowes, the Oscar-winning writer of 2001’s “Gosford Park.”

Fellowes’ original series about a well-to-do British family in the early 1920s starred Hugh Bonneville, Elizabeth McGovern, Michelle Dockery, Dan Stevens and Dame Maggie Smith, running from 2010 through 2015 for six seasons. The 2019 movie continued the story with a visit to Downton from the King and Queen, and it was a pretty major release for Focus, opening with $31 million in 3,079 theaters and sticking around through the fall. It would gross $96 million just in North America, becoming Focus Features’ highest-grossing movie, and a similar amount of overseas, so making a sequel was a given.

Directed by Simon Curtis (“My Week with Marilyn”), the sequel offers two specific storylines, one in which a film company comes to Downton Abbey to make a silent movie, while a good portion of the family travels to the South of France after it’s discovered that Smith’s Lady Violet, Dowager Countess of Grantham, has inherited a villa from a man she met sixty years prior. Although some of the cast, like Matthew Goode, didn’t come back for the sequel, it does have some new members of the cast, including Hugh Dancy from “Hannibal.”

One could presume “A New Era” would open as well as its predecessor, but it’s been nearly three years since the previous movie, and we’ve seen other attempts at making movies based on television shows only fare well for a single theatrical release. For instance, the “Sex and the City” movie opened with $56.8 million in 2008 and grossed $156.3 million, but two years later, its sequel only opened with $31 million and grossed less than $100 million. Granted, the reviews for “Sex and the City 2” were absolutely horrid, even compared to the first movie.

“A New Era” opened earlier in the UK and other international markets where it hasn’t done as well as the previous movie, but reviews are generally good with 76% at Rotten Tomatoes. That’s compared to the 84% rating from the first movie, so that isn’t bad, but it’s still probably going to have to settle for second place somewhere in the mid-$20 millions.

Offering some very different counter-programming, presumably for the 20-to-30 something crowd, is “Men,” the latest movie from Alex Garland. It stars recent Oscar nominee Jessie Buckley (“The Lost Daughter”) as a woman who recently lost her husband to suicide, who begins to experience all sorts of horrifying events when she rents a remote country house to help recover.

Garland made his bones as a screenwriter on movies like “28 Days Later” before shifting over to directing with 2015’s sci-fi film, “Ex Machina,” which won an Oscar for its visual effects. A24 gave that movie a limited release in April 2015 before expanding it nationwide into 1,255 theaters (where it made $5.3 million) and then expanded into 2,000 theaters (where it made $3.5 million). It was a solid early hit for the distributor that grossed $25.4 million. Garland’s next movie, “Annihilation,” starring Natalie Portman, was released by Paramount in February 2018 where it opened with $11 million in 2,000 theaters and grossed $32.7 million. Unfortunately, it cost $40 million vs. the $15 million for “Ex Machina,” so it wasn’t considered a hit.

A24 have taken a similar approach with “Men” as they did three years ago with Ari Aster’s “Midsommar,” starring Florence Pugh, which garnered $10.9 million in its first five days, opening on the Wednesday before the 4th of July. Reviews for “Men” are even in the same ballpark as “Midsommar” with 86% on Rotten Tomatoes, but that movie was in a similar genre as Aster’s previous movie, “Hereditary.” “Men” goes further into straight-up horror than anything Garland has done maybe since “28 Days Later,” so it might not be as appealing to those who appreciate science fiction. Even so, there’s a strong chance “Men” can do well enough to take third place behind “Doctor Strange” and “Downton Abbey,” but it probably will open under $10 million to get there.

A third movie coming out this weekend is Machine Gun Kelly’s stoner comedy “Good Mourning,” which will be released by Open Road into an undisclosed number of theaters. Kelly aka Colson Baker actually co-wrote and co-directed the film with musician/rapper Mod Sun, and Kelly also stars in it, along with many of his friends and acquaintances, including girlfriend Megan Fox, “SNL” star Pete Davidson, influencer Dove Cameron and comic Whitney Cummings. The latter may be ironic since she also appeared in the Foo Fighters horror movie, “Studio 666,” which was released by Open Road in February when it bombed quite badly. That was a good example of how a musical act can be hugely popular but that doesn’t mean people will pay to see them in a movie.

Without knowing if “Good Mourning” will be opening in more than 500 theaters, it’s hard to determine whether it might get into the top 10, but if it does, it will be on the lower end, since it’s also going to be available On Demand.

Check back on Sunday to see how all the movies above did, and don’t forget to play this week’s Gold Derby box office prediction game.