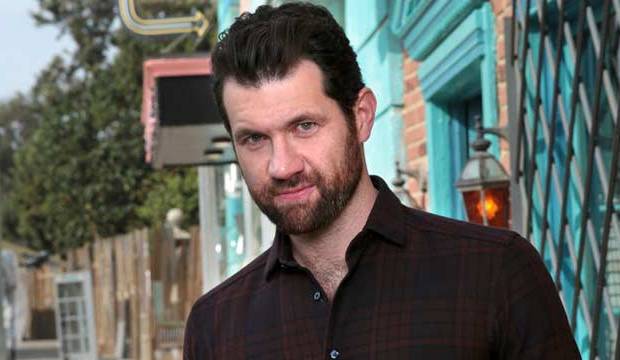 In a recent promotion for his new comedy “Bros,” star and co-writer Billy Eichner returned to his “Billy on the Street” persona, dragging Jack Black through the streets of L.A. and screaming: “I need allies! ‘Bros’ is coming out! Where’s my ally?” He may just find a new group of allies in the Hollywood Foreign Press Association, because the actor is on track to score his first ever Golden Globe nomination for the gay-themed comedy.

Eichner stars as Bobby, an LGBTQ history museum curator, who is hired to help write a gay romantic comedy. Though Bobby is proudly single, he strikes up an unlikely relationship with the decidedly more “masc” and emotionally unavailable Aaron (Luke MacFarlane). The meet-cute has been touted as the first gay rom-com released by a major film studio. Eichner is also now the first openly gay man to star in and co-write a studio film.

It’s usually tough for comedies to find their place in awards season, but thankfully the Golden Globes are returning to the fray, with a live broadcast airing on Tuesday, January 23. The Globes are unique in that they have separate categories for Comedic (and musical) films to compete, along with their respective actors. This creates the perfect opportunity for Eichner to score his first career Globe nomination, in the Comedy/Musical Actor field.

As of this writing, Gold Derby’s exclusive combined odds rank Eichner in fourth place for his star turn, with 13/2 odds for a nomination. Those odds are based on the predictions of our experts, editors, and users like you. This already places him ahead of industry favorites like Adam Driver (“White Noise”), Nicholas Hoult (“The Menu”), Daniel Radcliffe (“Weird: The Al Yankovic Story”), and Daniel Kaluuya (“Nope”). He only has to sneak past Diego Calva (“Babylon”), Daniel Craig (“Glass Onion”), and Colin Farrell (“The Banshees of Inisherin”) if he wants to take home the gold.

Billy Eichner has earned three Primetime Emmy nominations for executive producing and hosting “Funny or Die’s Billy on the Street.” Gold Derby users even nominated him for Variety Performer of the Decade in our Gold Derby Awards for hosting this riotous roaming interview series. The HFPA do not include any variety series categories at their ceremony, so Eichner has never been able to parlay his Emmy recognition into a Globe nomination. But surely the success and history-making nature of “Bros” (coupled with the excitement of possibly having the brass comedian at the ceremony to heckle the tipsy stars in the room), will finally land Eichner a nomination.