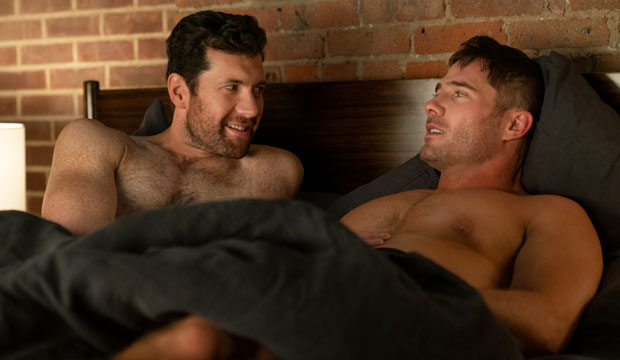 The romantic comedy “Bros” has been making headlines since the moment the project was announced in 2019. Billed as the first major studio LGBTQ rom-com, the Universal film starring Billy Eichner and Luke Macfarlane has garnered quite a bit of attention for various reasons. Could all of this press affect its chances during the 2023 awards season? Here are five reasons why I believe “Bros” will dominate the 80th Golden Globes.

1. The film is making headlines left and right.
As the old adage says, “all publicity is good publicity.” Though the film has been relatively positively received by critics (with a Metacritic score of 77 and an 88% Tomatometer score) and audiences (boasting a 90% Rotten Tomatoes audience score), the box office reception left a bit to be desired. On a reported budget of $22 million, the film has currently only grossed $10.8 million, which led writer and star Eichner to make a lengthy post on Twitter with his beliefs on why this happened. That statement alone has generated multiple think pieces, articles and posts all ruminating on how this took place, the status of the romantic comedy in general, as well as thoughts on homophobia in Hollywood, streaming vs. theatrical releases, the list goes on. All this press could keep the film at the forefront of voters’ minds, and create a storm of content that lands the movie several nominations.

2. The cast is diverse and phenomenal.
Anchoring the film is Eichner as Bobby Leiber, podcast host and LGBTQ museum curator. Known primarily for his television show “Billy on the Street” and his roles on “American Horror Story” and “Impeachment,” the world has been waiting for him to make a big screen breakthrough. His comedy stylings fit perfectly with the rest of the cast, featuring television and film actors such as Macfarlane (as Aaron, Bobby’s traditionally masculine love interest), Amanda Bearse (as Aaron’s very traditional mother) and Bowen Yang (hilariously portraying millionaire Lawrence Grape), with stars such as Debra Messing, Kristin Chenoweth, Amy Schumer and Seth Meyers playing themselves in cameo roles. The cast is made up of almost all LGBTQ identifying performers, a major feat for a studio film. This diverse cast, paired with the subject matter of the film, could be a plus for its chances at the Globes, with the HFPA being under fire for its lack of inclusivity in recent years. Voters may want to ensure that they include diverse nominees in this year’s lineup, ensuring their return to NBC is met with open arms.

3. The Globes have split categories for Drama and Comedy.
The Golden Globes are known for separating film categories into drama and comedy, allowing movies that might not usually be tapped by awards bodies a chance to be recognized. “Bros” is a comedy through and through, and with the HFPA’s efforts to nominate true comedies in the category, it has a great chance at receiving nominations for Best Film Comedy and Best Film Comedy Actor. Eichner is currently slotted at number four in our racetrack odds, with the movie hovering on the bubble in sixth place.

4. The screenplay is comedic gold.
I don’t often laugh out loud in movie theaters, but this film had me trying to silence myself several times. The screenplay is delightful, hilarious and at times very poignant. It’s reminiscent of newer “cult comedies” such as “Bridesmaids” (a film that like “Bros,” is produced by Judd Apatow) and “Mean Girls,” which have taken on lives of their own. Comedies have been able to break into this category in the past, with films like “Licorice Pizza,” “Lady Bird” and “It’s Complicated” each making the cut.

5. It’s in contention for Best Original Song.
The song category can be tricky to size up, especially in a year with multiple A-list contenders like Lady Gaga (“Hold My Hand” from “Top Gun: Maverick”), Taylor Swift (”Carolina” featured in “Where the Crawdads Sing”), Billie Eilish and Finneas (“Nobody Like U” in “Turning Red”), and of course the annual contribution from Diane Warren (“Applause” from “Tell it Like a Woman”). There’s something special about the original song “Love is Not Love” featured at the end of ”Bros” that makes me believe it’s a worthy contender. Whether it’s the impressive vocals from Eichner (who wrote and worked on the piece alongside composer Marc Shaiman), or the clever specificity of its lyrical content, there’s something that everyone, including the voters can latch onto.