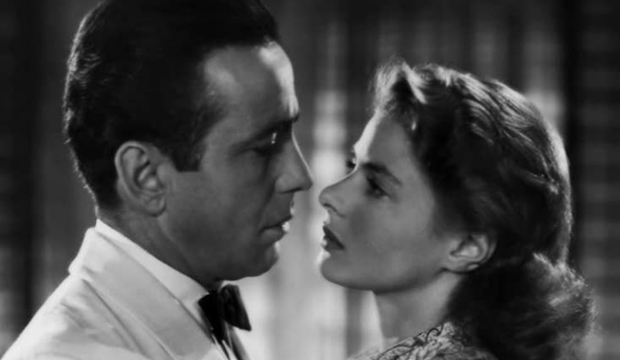 Warner Brothers released “Casablanca” in New York on Nov. 26, 1942, which just happened to be Thanksgiving. But the romantic World War II drama starring Humphrey Bogart, Ingrid Bergman and Paul Henreid was anything but a turkey. To say the New York Times review was effusive is something of an understatement: “Warners here have a picture which makes the spine tingle and the heart take a leap….And they have so combined sentiment, humor and pathos with taut melodrama and bristling intrigue that the result is a highly entertaining and even inspiring film.”

And critical praise and audiences’ adoration continued when it opened in Los Angeles and nationwide in January 1943. It went on to win three Oscars for Best Picture, director for Michael Curtiz and adapted screenplay for Julius J. and Philip Epstein and Howard Koch. Let’s take a look back on the occasion of the 80th anniversary.

As time has gone by, “Casablanca” has only grown in the hearts of moviegoers and film historians. Fans can quote many of the film’s famous lines including “Here’s looking at you kid”; “Louie, I think this is the beginning of a beautiful friendship”: “We’ll always have Paris”; and “Play it Sam, play ‘As Time Goes By.”’

Speaking of “As Time Goes By,” the film’s great success propelled this 1931 Herman Hupfeld tune into the cultural landscape. In fact, the song, which was written for the 1931 Broadway musical “Everybody’s Welcome,” was voted No. 2 on “AFI’s 100 Years…100 Songs” 2004 CBS special.

Then there is the oh-so-hot romance between Bogart’s world-weary Rick’s Café Americain owner Rick Blaine and the beautiful Isla Lund (Bergman). She was the love of Rick’s life and is now married to Victor Laszlo (Henreid) , the brave, handsome fugitive Czech resistance leader.

“Casablanca” wasn’t just any World War II-themed drama; it looked at the plight of European refugees who fled when Hitler and the Nazis invaded their countries. And most of the cast could more than identify because they too were immigrants with many being Jewish.  S.Z. Sakall and Marcel Dalio lost close family in Nazi concentration camps.

A 2017 BBC Culture article noted: “Luckily, Los Angeles in 1942 wasn’t too different from Rick’s café. It was the place where Jewish exiles from all over Europe gathered, practiced their English, enjoyed the hospitality and the companionship, and dreamt of happier lives. And if the plot of ‘Casablanca’ argues the case for helping refugees, the film’s very existence is a pretty strong argument, too. After all, if it weren’t for the refugees in Hollywood, then it couldn’t have produced its most beloved classic.”

(Hungarian Curtiz came to the U.S. in 1926 and Austrian-born composer Max Steiner arrived in New York in 1914; both men were Jewish.)

In fact, of the 14 credited actors in the film only three were born in the U.S.-Humphrey Bogart, Dooley Wilson and Joy Page. British actors Claude Rains (Captain Renault) and Sydney Greenstreet (Senor Ferrari) had been performing for years on Broadway and Swedish actress Bergman had been signed by producer David O. Selznick had made her American debut in 1939’s “Intermezzo.”

But the other performers, such as Henreid, were emigres. The Austrian actor has been stage star in Vienna as a member of Max Reinhardt’s theater company. But Henreid turned down a movie contract with UFA in Berlin in the 1930s because they wanted to him join the National Socialist Actors Guild of Germany. His daughter Monika Henreid told me in an interview for TCM that before the UFA offer he had done a play in London. “After that play, he returned to the Viennese stage and some film. When it was time to leave because of the political situation, he had another offer in London”

Conrad Veidt, who played the ruthless Nazi Colonel Strasser was, as Henreid, a virulent anti-Nazi. Though he was not Jewish, his third wife was and anytime he had to write down his ethnic background to obtain work he would state he was Jewish.. He and his wife fled to England in 1933 where he appeared in several films eventually becoming an English citizen in 1939. He moved to Hollywood in 1940 where he excelled in playing Nazis. He didn’t worry about being typecast because he wanted to show the world how evil the Nazis were. In fact, he refused to play a Nazi he considered sympathetically written. He died a few months after the release of “Casablanca,” suffering a heart attack while playing golf. He was just 50.

S. Z. “Cuddles” Sakall, the Hungarian Jewish actor who played head waiter Carl in “Casablanca,” worked on stage and in film in his native country, Vienna and Berlin. But when Hitler came to power in 1933, he returned to his homeland where he appeared in some 40 films. When the Nazis came invaded Hungary in 1940, he came to Hollywood where he made his U.S. debut in the 1940 Deanna Durbin musical “It’s a Date.” According to Fandango, he was nicknamed “Cuddles” due to him being cast in an “endless succession of excitable theatrical impresarios, lovable European uncles and befuddled shopkeepers.”

Peter Lorre, who was born of Jewish descent in what was then known as Austria-Hungary, came to fame in 1931 as a serial killer in Fritz Lang’s German masterpiece “M.” He left Germany in 1933 where he first lived in Paris and then moved to London where he starred in Alfred Hitchcock’s 1934 “The Man Who Knew Too Much.” That same year, he came to Hollywood.

Lorre, who plays Ugarte in “Casablanca,” did help several friends get out of Europe. But “The Lost One: The Life of Peter Lorre” notes that he inadvertently got his family still in Europe in trouble by making anti-Nazi speeches on shortwave radio. According to Lorre’s brother Francis: “My aunt was dragged off to Auschwitz but got sick on the long march towards the Austrian border and fell by the wayside and was too ill to continue. So that probably saved her life, for the time being, anyway. And my grandmother, who was very, very upset by the whole thing, tried to commit suicide, unsuccessfully, but at least having landed I the hospital at that stage. We prevented her from being dragged in front of the Gestapo.”

French Jewish actor Marcel Dalio, who had appeared in Jean Renoir’s 1937 “Grand Illusion” and 1939’s “The Rules of the Game,” and his wife, actress Madeleine LeBeau, fled in 1940 when the Nazis began their invasion of France. Their trip to Hollywood had more twists and turns than a feature film.

But they ended up at Warner Bros where they both appeared in “Casablanca.” Dalio is unbilled as Emil the croupier who hands Renault his bribe money and says, “Your winnings, sir.” LeBeau, who was the last cast member to die in 2016 at the age of 92, made more of an impression as Yvonne, Rick’s spurned girlfriend  Her face is shown in closeup as tears stream down during  the stirring “La Marseilles” performed by her and the rest of refugees at Rick’s café. And she shouts out “Viva La France” at the song’s conclusion. By all accounts, she wasn’t crying as her character, those were real tears for her beloved homeland.