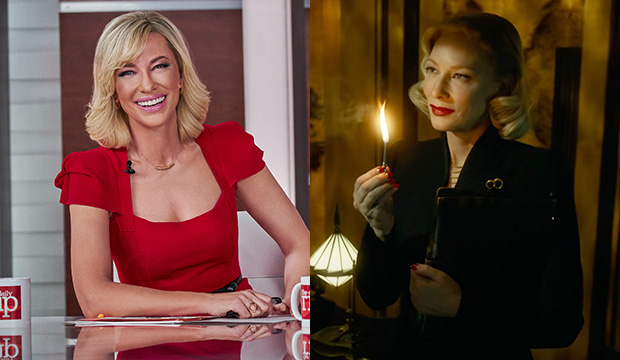 After appearing in Adam McKay’s satirical comedy “Don’t Look Up” and Guillermo del Toro’s psychological thriller “Nightmare Alley,” Cate Blanchett could make history at the Screen Actors Guild Awards should either movie receive a bid for film ensemble come Wednesday. It would break her tie in the category with Russell Crowe and Brad Pitt of six nominations each. If both movies receive ensemble nominations, however, Blanchett will also become the 19th person in SAG Awards history to snag double nominations in the same year, and the fourth person to do it in the last three years.

The actors who’ve already accomplished this impressive feat are:

Edward Norton in 2014’s “Birdman” and “The Grand Budapest Hotel”

Caleb Landry Jones in 2017’s “Three Billboards Outside Ebbing, Missouri” and “Get Out”

In “Don’t Look Up,” Blanchett portrays Brie Evantee, a morning talk show host who doesn’t take the warning of an impending comet that will destroy humanity seriously. In “Nightmare Alley” — which is based on William Lindsay Gresham’s 1946 novel of the same name — Blanchett plays a corrupt psychiatrist who teams up with Bradley Cooper’s Stan Carlisle, a carny and con man posing as a mentalist, by offering him information on her rich patients so they can fleece them.

Currently, “Don’t Look Up” is in fourth place at 7/1 odds in Gold Derby’s combined odds to receive a nomination for film ensemble. The movie trails Kenneth Branagh’s “Belfast,” Jane Campion’s “The Power of the Dog” and Steven Spielberg’s “West Side Story.” Rounding out the top five is Sian Heder’s “CODA.” This puts Blanchett in a good position to at least break her tie with Crowe and Pitt and give her the solo record for most SAG Award ensemble nominations by a performer. However, “Nightmare Alley” is way back in 10th place at 70/1 odds, behind “King Richard,” “House of Gucci,” “The Harder They Fall” and “Being the Ricardos.” This obviously complicates things a bit for Blanchett, who also has the most consecutive ensemble noms with four from 2001 to 2004 (thanks, “The Lord of the Rings” trilogy!). But with a stacked cast of well-known actors and a movie full of great performances, it’s still possible for her to add yet another entry to her already lengthy list of accomplishments.

SAG Awards odds for Best Film Ensemble
Who will win?