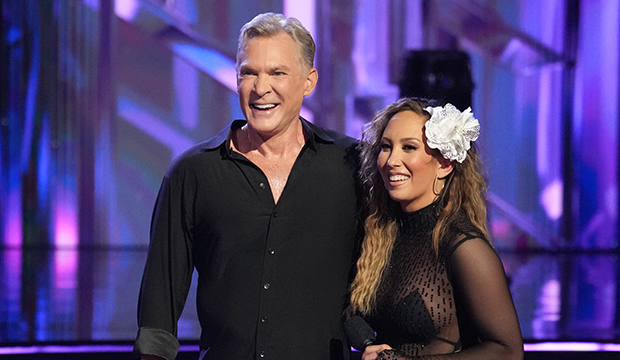 Sam Champion and Cheryl Burke were saved from elimination on “Dancing with the Stars” on Monday, but the pro would’ve been all right if the judges had voted the other way.

“With this season in particular, there’s peace along with the whole elimination process,” Burke told Us Weekly. “Like, normally I’m a nervous, sweaty wreck, but with Sam, if I’m looking at the actual ability of all the celebrities? We are very blessed to still be in this competition, to be quite honest, and Sam knows that.”

The pair landed in the bottom two for the first time this season after earning a 25 for their samba on Bond Night. The judges unanimously voted to save them, sending Cheryl Ladd and Louis van Amstel, who were in the bottom two for the second straight week, out the door. With Ladd’s exit, Champion, 61, is now the oldest contestant remaining in the competition. The past two weeks have seen three-way ties atop the leaderboard between the same three couples: Wayne Brady and Witney Carson, Charli D’Amelio and Mark Ballas, and Gabby Windey and Val Chmerkovskiy.

“Every season is a lot more challenging than the previous season. Everybody’s so talented. Everyone’s got their own thing. And Sam and I are just really happy to be here. I know he’s got more,” Burke said. “Let’s not forget, he’s 61 years old. This is a hard journey so far, but it’s been worth it. He’s learned a lot as well.”

The couple will perform the paso doble to “The Greatest Show” from “The Greatest Showman” (2017) for the upcoming Disney+ Night. Despite the bottom two showing, Burke has not changed her approach to teaching the “Good Morning America” weatherman. “I’m just going to continue to work him hard. This is not in his wheelhouse whatsoever,” the two-time champ explained. “It’s been interesting to try and change the vocabulary for me as well. How can I get through to him about certain things that may not mean much to him?”