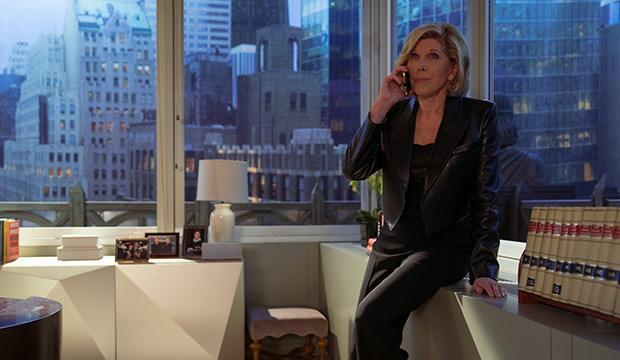 As they do every year, the Critics Choice TV Awards once again shined a light on acclaimed drama “The Good Fight,” nominating the final season of the series for four awards. But this year, their appreciation for star Christine Baranski reached new heights and set a record. Her final nomination for playing lawyer Diane Lockhart marks her 10th Critics Choice TV bid overall, making her the first and only performer to break double digits in the 13-year history of the awards.

Baranski earned her first Critics Choice bid in Best Drama Supporting Actress for “The Good Wife” — the CBS series on which she originated the role of Diane — at the second annual ceremony in 2012. She went on to earn three more for the show from 2014-16, but lost all four times to Christina Hendricks (“Mad Men”), Bellamy Young (“Scandal”), Lorraine Toussaint (“Orange Is the New Black”) and Thandiwe Newton (“Westworld”), respectively.

Before earning her first nomination for “The Good Fight,” Baranski snuck in a bid in the now-defunct Best Comedy Guest Performer category, which the awards offered for only six years. She was nominated in 2016 for “The Big Bang Theory,” a role for which she also netted four Emmy nominations, but lost to Alec Baldwin and his impersonation of President Donald Trump on “Saturday Night Live.” The unusual face-off nicely foreshadowed Baranski’s “Good Fight” gig, since Diane would soon embark on a six-year struggle to maintain her sanity during the years of the Trump administration.

SEE ‘The Good Fight’ series finale: How the daring drama pulled off an exceptional finish

The other half of Baranski’s Critics Choice nominations have all recognized her work on “The Good Fight.” She was first singled out in 2018 for the show’s first season, and earned additional Best Drama Actress bids from 2020-23. She only missed once, for the show’s second season, which ironically most critics and fans call their favorite of all six years. Despite the voting body’s love of the series, Baranski has never won, losing to Elisabeth Moss (“The Handmaid’s Tale”), Regina King (“Watchmen”), Emma Corrin (“The Crown”) and Melanie Lynskey (“Yellowjackets”).

Her luck may very well change this time around, though, if voters realize that this is their final opportunity to award her for a role they have nominated nine times. Baranski had a particularly impressive season, too, which found Diane struggling with the overturning of Roe v. Wade and voting rights, legal battles she dedicated her whole career to winning. The impeccably dressed lawyer’s malaise played out against the backdrop of increasing violence in the streets, which hit a fever pitch in the series finale as white supremacists opened fire on the historically Black law firm where Diane, Liz (Audra McDonald) and Ri’Chard (Andre Braugher) work. All three performers earned nominations this year.

It also bodes well for Baranski’s chances that the group’s support of the show has rarely waned over the course of its six-year run. Its nominations haul has remained steady this year and last, with four bids both years, matching its tally for the third season and outpacing the first, second and fourth. But being overdue has not benefited Baranski in the past. The actress earned six consecutive Emmy bids for “The Good Wife” back in the day — one of the highest totals in the history of the category — but she never took home the prize, missed a bid for the final season and has not yet been recognized for her leading role in the spin-off. At Critics Choice, she’ll face Sharon Horgan (“Bad Sisters”), Laura Linney (“Ozark”), Mandy Moore (“This Is Us”), Kelly Reilly (“Yellowstone”) and Zendaya (“Euphoria”).

In all, “The Good Fight” concludes its six-year run with 18 Critics Choice nominations, including five for Drama Series. It has yet to take home a single prize, but has four opportunities for its final season, where it competes for series, actress (Baranski), supporting actress (McDonald) and supporting actor (Braugher).