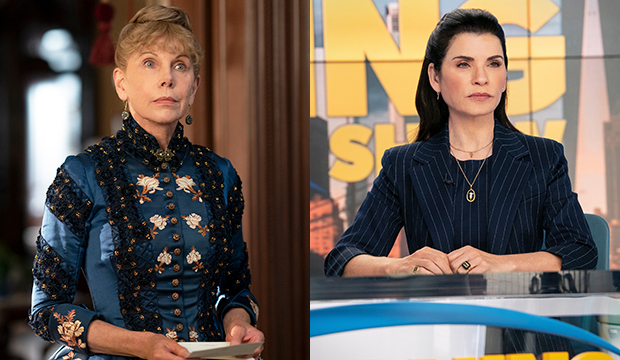 At the 1995 Emmy Awards, Christine Baranski and Julianna Margulies both won prizes in supporting categories, Baranski for comedy “Cybill” and Margulies for drama “ER.” Almost 15 years later, the two actresses would partner on the CBS legal series “The Good Wife,” which ran seven seasons and netted both performers an impressive number of nominations by the time the show wrapped in 2016. This year, they might both receive recognition for new roles — Baranski for HBO’s “The Gilded Age” and Margulies for Apple TV+’s “The Morning Show” — and compete in the same category. Their characters didn’t end up in a good place in the series finale after all, remember?

In a particularly competitive year for dramas, it may be hard for either actress to crack the top eight contenders in Best Drama Supporting Actress, let alone both of them, but our current combined odds suggest that neither is that far off. Margulies sits just two spots out of our projected lineup in 10th place, while Baranski trails a bit further behind in 12th with only past nominee Fiona Shaw (“Killing Eve”) between them. Sarah Snook (“Succession”), two-time winner Julia Garner (“Ozark”) and Jung Ho-yeon (“Squid Game”) lead the extraordinary tight race.

What might benefit the former co-stars over some of our projected nominees, which include industry veteran J. Smith-Cameron (“Succession”) and rising star Sydney Sweeney (“Euphoria”) is their past popularity with the Television Academy. Over the course of her career, Margulies has accumulated 10 Emmy nominations, including six consecutive bids for “ER” — two in supporting and four in lead — winning once on her very first nomination in 1995. She earned four more for the seven seasons of “The Good Wife,” taking home the award in 2011 for the second season and rebounding after a nomination snub to prevail again in 2014 for the series’ best run of episodes (we’re all still mourning the loss of Josh Charles’ Will Gardner).

While Baranski may not have as many wins as the good wife herself, she has a higher nomination tally with an impressive 15 bids. Like Margulies, she won on her very first nomination in 1995 for the first season of the Chuck Lorre sitcom “Cybill” and received nominations for each of the show’s four seasons. Right after “Cybill” wrapped, she landed a guest bid for “Frasier” and then a decade later returned to that category for the first of her four nominations for “The Big Bang Theory.” The two-time Tony Award-winning actress earned six consecutive bids for her supporting role on “The Good Wife,” more than any other performer on the show, but she never won.

It is hard to say which of these two has the edge over the other if only one breaks through this year. On one hand, “The Morning Show” has already proven itself with the acting branch of the academy, earning five nominations for its first season for Jennifer Aniston, Steve Carell, Mark Duplass, Martin Short and Billy Crudup, who went on to win. This bodes very well for Margulies, who plays Laura Peterson, a journalist and anchor who returns to UBA after getting the pink slip decades ago by homophobic execs. On the other hand, “The Gilded Age” is completely untested at the Emmys, but the track record of its talent on and off screen speaks to its potential. Julian Fellowes created and writes the series; his previous show “Downton Abbey” earned 69 Emmy bids and took home 15 prizes. It doesn’t hurt that “Gilded Age” has HBO behind it either, and that Baranski plays the particularly obstinate and sharp-witted character Agnes van Rhijn, written in the vein of Maggie Smith’s Emmy-winning Violet Crawley.

If Baranski does break through, she would earn her seventh career citation in supporting actress and join a very small and impressive group of performers with the most nominations in the category. Only two women have seven nominations: Nancy Marchand for “Lou Grant” and “The Sopranos,” and Betty Thomas for “Hill Street Blues.” Tyne Daly has the most of all with eight, for “Christy” and “Judging Amy.” Certainly not bad company.