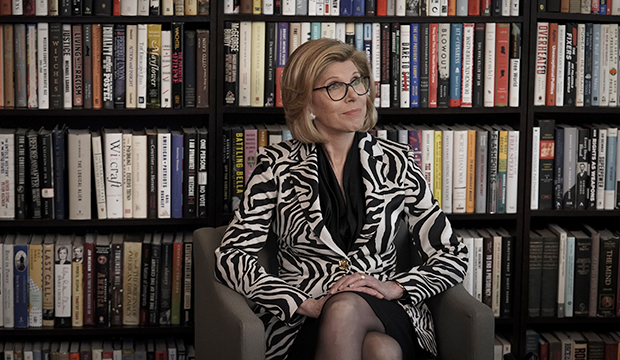 For over a decade and on two different series, Christine Baranski’s attorney Diane Lockhart has been a paragon of liberal feminism. But in the fifth season of Paramount+’s “The Good Fight,” the Emmy-winning actress took the character into a new, daring and even uncomfortable direction as the show explored Diane’s privilege. After sitting out the past five Emmy cycles for this performance — even as she continues to bring her signature character to new heights — Baranski has more than earned a slot in this year’s Drama Actress lineup for her nuanced and thrilling work this season.

Baranski had two major intersecting storylines in the critically-acclaimed fifth season. In the first, her staunch Republican husband Kurt (Gary Cole) gets embroiled in the FBI’s investigation of the Jan. 6 insurrection after a man he trained at a shooting range was photographed at the capitol. Diane’s utter disgust at the riot leads her to turn over the man’s identity to the authorities, but doing so puts Kurt directly in their crosshairs and drives a wedge between the ideologically-split married couple. Watching Baranski grapple with Diane’s conflicted devotion to Kurt and her ethics is thrilling, especially when the FBI raids their house. The actress is just as delightful playing Diane’s aggressiveness when she takes matters into her own hands to clear Kurt’s name.

SEE Emmy spotlight: Delroy Lindo has never been better than in his fantastic farewell on ‘The Good Fight’

She’s even better in the second half of the season, too, as Kurt’s reputation and new job with the National Rifle Association increase the pressure on her business partner Liz (Audra McDonald) to oust Diane from her position at the top of their historically Black law firm, a position she vehemently refuses to resign. For guidance through this particularly precarious moment in her career, Diane dreams up a midnight fireside chat with the late Supreme Court Justice Ruth Bader Ginsburg (played to perfection by legend Elaine May), who encourages Diane to remain in her role no matter what it takes to do so. In a shocking turn for the character, Diane leverages her wealthy white clients to complain about this potential change in leadership in order to remain a name partner. Creators and writers Robert King and Michelle King were bold to portray Diane in such an unflattering light, and Baranski pulled off the heel turn seamlessly, even if fans hated to see her “break bad.”

In perhaps the best scene of the entire season, Diane and Liz’s resentment comes to a head in a brutally honest and downright brutal argument. Baranski and McDonald deliver bravura performances, the former in the ferocity of Diane’s defensiveness and the latter in Liz’s disbelief at Diane’s hurtful blindspots. In an exclusive interview with Gold Derby, Robert King described this no-holds-barred scene as “very emotional for Christine and Audra” to perform, and it felt equally challenging to watch. For fans feeling uneasy about what Diane decided to do, the season fortunately ended with a reconciliation between the two, and Baranski plays her character’s humility with a lot of heart and even some tears in her eyes.

After the one of her best seasons as Diane on either “The Good Wife” or “The Good Fight,” Baranski deserves to hear her named called on Emmy nominations morning on July 12. But according to our current combined odds, the 15-time nominee ranks 11th in the Drama Actress race, four slots outside of our projected lineup. Those also vying to break into the race including Kelly Reilly (“Yellowstone”), Carrie Coon — Baranski’s costar on the HBO series “The Gilded Age” — and Britt Lower (“Severance”). One of these hopefuls just might surprise, too, as the final few slots in the category are true tossups. After an uneven final season and a controversial series finale, for example, “Killing Eve” stars Jodie Comer and Sandra Oh could easily miss out; Comer is right on the edge in sixth, while 12-time nominee Oh has fallen out of our expected nominees.

Even though “The Good Fight” has frustratingly yet to break through at the Emmys, it has been receiving a fair share of awards encouragement this season from critics and in the trades. Lynette Rice (Deadline) spotlighted Baranski on the site’s Emmy Hotlist, calling her a “master” and writing, “Baranski’s ax-throwing, Donald Trump-loathing, Kurt McVeigh-loving Diane Lockhart is the primary reason why the Robert and Michelle King legal drama makes it into critics’ top 10 lists year after year.” The two-time Tony winner will only have one final chance to land another nomination for playing lawyer Lockhart, as the series recently announced that its upcoming sixth season will be its last. If the show wraps without her landing a farewell bid, she always has Julian Fellowes’ “The Gilded Age.”