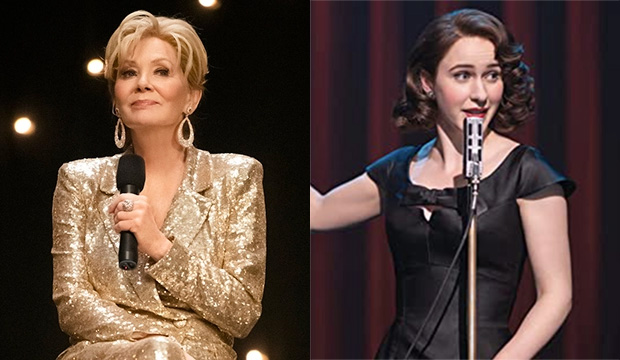 Long before the 2021 Emmys ceremony took place, it was essentially a foregone conclusion that “Hacks” star Jean Smart would walk away with the Best Comedy Actress award. Now that she is the category’s reigning champ, she could emulate the likes of Candice Bergen (“Murphy Brown”) and Julia Louis-Dreyfus (“Veep”) by achieving a direct follow-up win for her show’s sophomore season, which is set to premiere on HBO Max in May. Though she won handily last time, she could face more of a challenge this year given that she has two things in common with her biggest competitor Rachel Brosnahan (“The Marvelous Mrs. Maisel”): Both women have taken the prize before, and they both play stand-up comics.

Brosnahan has been nominated three times for Amazon Prime Video’s “Maisel” and triumphed on her first outing in 2018. At the time, that race was notable in that it did not involve Louis-Dreyfus, whose work on “Veep” earned her an unprecedented six consecutive trophies from 2012 to 2017. On the same night, “Maisel” also took the title of Best Comedy Series and won an additional half dozen awards, including ones for directing and writing.

Picking up from a hiatus of more than two years, the eight-episode fourth season of “Maisel” streamed from February to March 2022. Brosnahan continued in the role of Midge Maisel, a 1950s housewife-turned-comedian who, at this point in the series, has experienced more downs than ups in her tumultuous career. Part of her growth has involved realizing most of her mistakes are rooted in self doubt, and she is primed for an attitude shift at the start of the show’s upcoming fifth and final season.

Brosnahan and Smart are the only two actresses to ever win in this category for playing characters who regularly work as entertainers. Smart’s Deborah Vance, a modern-day veteran Las Vegas headliner, was last seen making amends with her scorned young writing partner following the close of her residency and is set to go on a bus tour in season two. Smart’s recent lead victory completed her comedy Emmy trifecta, since she nabbed a pair of guest awards for “Frasier” in 2000 and 2001 and a supporting one for “Samantha Who?” in 2008. “Hacks” also won in the directing and writing categories last year but lost the series contest to “Ted Lasso.”

What makes this possible acting battle especially intriguing is that, although these two characters live in different time periods and are at opposite points in their careers, they share some major life experiences. Both of their stage personas have been heavily influenced by spousal betrayal, and both of their arcs involve balancing motherhood and the demands of their jobs. If they existed in the same universe, Maisel may have had somewhat of an influence on Vance as someone who helped pave the way for bawdy women in comedy.

This stand-up comic showdown would constitute the 30th overall instance of past Best Comedy Actress winners facing off, as well as the fifth in 10 years. The most recent case involved Brosnahan and Louis-Dreyfus, who were both bested by Phoebe Waller-Bridge (“Fleabag”) in 2019. Smart and Brosnahan are currently ranked first and second in our predictions center, while their respective shows are running second and fifth in our Comedy Series race behind “Ted Lasso.”