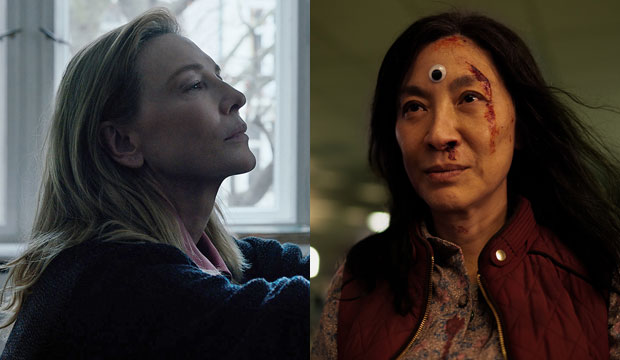 Cate Blanchett (“TÁR”) is the Best Actress front-runner at the Oscars, so it’s no surprise that she leads our Critics Choice predictions too. But just like at the Oscars she faces a tough challenge from overdue veteran rival Michelle Yeoh (“Everything Everywhere All at Once”). So who will win this preliminary bout? And will they go on to win the academy’s prize?

As of this writing Blanchett leads with 71/20 odds based on the combined predictions of well over 1,000 Gold Derby users. She’s backed by four out of six Expert journalists who have chimed in with their predictions so far, five out of eight Editors who cover awards year-round for Gold Derby, 15 of our Top 24 Users who got the highest scores predicting last year’s Critics Choice winners, and 15 of the All-Star Top 24 who got the highest scores when you combine prediction results from the last two years.

SEETodd Field (‘TAR’ writer-director): ‘I don’t think art and morality have anything to do with each other’ [Exclusive Video Interview]

However, Yeoh stars in the film we’re predicting to win Best Picture at the Critics Choice Awards, which also happens to be the film that leads the Critics Choice nominations with 14. That’s a huge vote of confidence in the film and could translate to a corresponding win for its star. She’s currently backed by two Experts, three Editors, eight of our Top 24, and eight All-Stars.

As it stands, none of the other four nominees have support from those four blocs of elite pundits: Michelle Williams (“The Fabelmans”), Danielle Deadwyler (“Till”), Viola Davis (“The Woman King”), and Margot Robbie (“Babylon”). Might we be underestimating one of them, or is this really a two-way race?