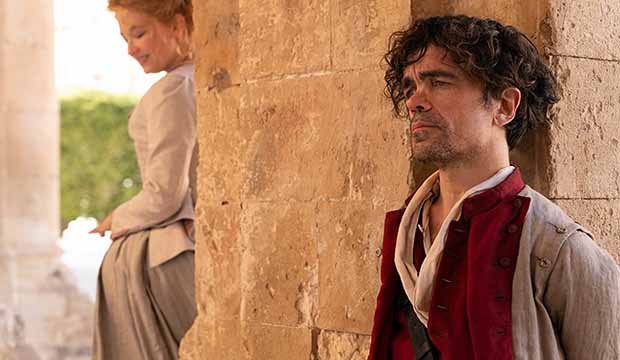 Audiences and even critics have shed more than a few tears over “Cyrano de Bergerac,” Edmond Rostand’s beloved romantic 1897 drama about a poetic, brave long-nose poet who loves the beautiful Roxanne. But it’s unrequited. When she falls in love with the young, handsome but rather shallow Christian, Cyrano writes the young man’s love letters and poetry using him as an instrument to proclaim his feelings for Roxanne.

Jose Ferrer won the Tony in 1947 playing the tragic Cyrano and the Best Actor Oscar for the 1950 film version. He also earned an Emmy nomination in 1956 for a TV adaptation. In 1973, Ferrer toured the U.S. in a musical version “A Song for Cyrano” and simultaneously, Christopher Plummer opened on Broadway in another musical “Cyrano,” for which he won the Tony in 1974. And Gerard Depardieu earned an Oscar nomination for the acclaimed 1990 French production

Peter Dinklage is taking on the complex role in the new MGM musical version “Cyrano.” The four-time Emmy winner for “Games of Thrones” doesn’t have a large proboscis. It is the fact that he’s a little person — Dinklage is 4’5” — that prevents him from telling Roxanne that he loves her.

Director Joe Wright (“Pride and Prejudice” “Atonement”) got involved in “Cyrano” because the stars were in alignment “I’ve been wanting to tell a love story again,” said the director during a recent Variety Zoom conversation. It was his life partner, Haley Bennett, who invited Wright in 2018 to attend an early workshop production of the stage musical version of “Cyrano,” with her and Dinklage and a book by Dinklage’s wife, Erica Schmidt.

“I loved the story since I was 18 or 19 when I saw the Gerard Depardieu version and it kind of spoke to my teenage angst at the time and feelings of unworthiness,” Wright said. When he saw Dinklage and Bennett as Cyrano and Roxanne, “there was a different way of thinking about it without the nose. It felt so much more relevant to me on an emotional, spiritual level.”

Wright and Schmidt worked for a couple of years on the screenplay. “Then we were in the middle of the pandemic. I felt I’d gotten the script to a point I was happy with and that had to do it now because it was a film about a human connection and the love of life. I wanted to almost make it in defiance of the incredibly bleak circumstances that we found ourselves in.”

The film, which was primarily shot in Noto in Sicily, ran into some major hiccups including an unexpected snowfall and an angry Mt. Etna. “Certainly, Etna was probably one of the most difficult sequences I ever shot,” Wright recalled. “We were prepared to shoot at 16,000 feet and then there was a massive snow dump that happened and our set that we built and the camera platform…was completely inaccessible, so we had to move down the mountain and improvise the entire sequence with a camera and a tripod.”

But despite the difficulties, Wright loved watching Dinklage, Bennett and Kelvin Harrison Jr., who plays Christian, bring this classic story to life. “I found the relationship between the three of them really, really moving actually because they’re all very, very different as actors.”  said Wright. Dinklage, who has earned strong reviews in the title role and is nominated for a Critics Choice Award, “has been around some time now and he started out in theater,” the filmmaker noted. “So, he has a very technical approach. He’s all about technique, with this huge well of emotional experience that he brings out through his technique. Stripping him back, allowing him to drop defenses and see him emerge as a man was beautiful.”

Bennett is an emotionally driven actor. “She works from deep imagination and a connection with her creative source through dream work,” noted Wright. “She’s someone who hasn’t had the opportunity to really investigate roles like this. To see her blossom and take full control of the power that she has as an actor and as a woman was really exciting.”

Harrison, reported Wright, had a “wide-eyed innocence” just as Christian “Kelvin said to me at the beginning of the project ‘I never imagined that I’d do period movies. This isn’t something that I do.’ I was like ‘Forget the fact that it’s a period movie, he’s just this guy who is in love and is new in town.”’

Though the three were completely different in their experience, they developed strong connections.  “We used to laugh because we felt that at high school, they would be the odd ones who sat at a table in the dinner hall by themselves. They’re all slightly kind of kooky or have a sense of otherness about them that, I think, was really beautiful and tender.”

This version of “Cyrano” has audiences asking during the famous balcony scene if Roxanne knew that it was Cyrano and not Christian who professing his love to her.” “Predominantly women come up and say, ‘She knew, didn’t she?”’ Wright explained it was a delicate balancing act. “I didn’t want to state it too clearly,” he said. “I wanted to allow space for the audience to project their own interpretation. Others go along with the story as it’s always been told-she doesn’t know. .”

Wright and his three stars discussed the idea that “there was something she knew but refused to allow herself to believe. If she knew it, if she believed it, if she vocalized it, if she acknowledged it, then life would be really difficult.  She was going to not acknowledge it, allow him space to speak his truth and allow him [to say] ‘I love you, Roxanne.’ Then that will change everything. But he never does and that’s the tragedy of it.”