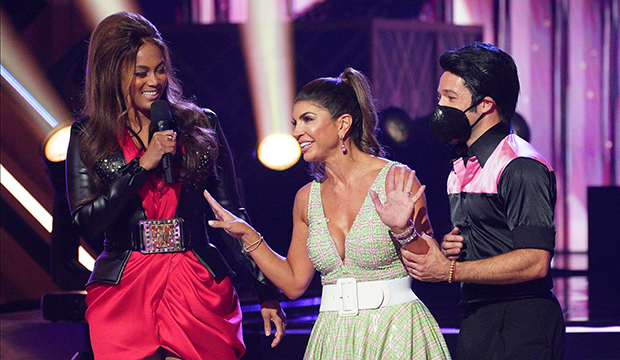 Teresa Giudice and Pasha Pashkov became the second couple eliminated from Season 31 of “Dancing with the Stars” on Monday night, but the “Real Housewives of New Jersey” star was hardly shocked by the result, especially when head judge Len Goodman had the final say.

For the second week in a row, Giudice and Pashkov landed in the bottom two, despite improving their score by three points, earning a 23 for their jive to “All Shook Up” on Elvis Night. It was the second lowest of the night, behind Ladd and Louis van Amstel‘s 21 for their tango to “A Little Less Conversation.”

In his critique of her jive, Goodman complimented the reality star on its liveliness, but noted that there were “too many faults in your leg action” and not enough sharpness in her kicks, drawing boos from the audience. Derek Hough and Bruno Tonioli voted to save Giudice, but Carrie Ann Inaba chose Ladd, handing the final decision to Goodman, whose vote as head judge essentially counts as two. “This is always [hard], especially as it is and it’s down to me, but I’m going to save Cheryl and Louis,” he said.

Giudice, however, harbors no bitterness. Her elimination is “all good” because she didn’t think she would win anyway. “I wanted to win the mirrorball … but you know what? There’s a lot of amazing dancers on this show, so I knew I wasn’t going to [win],” she explained. “When I saw my competition, I’m like, ‘I’m definitely not winning it.’ But I tried!”

As someone who’s “always wanted to dance,” Giudice is grateful that she was able to fulfill her dream. “Listen, it was an amazing experience. I had an amazing partner,” she said. “I did two dances in front of a live audience and it was pretty amazing. It was great.”