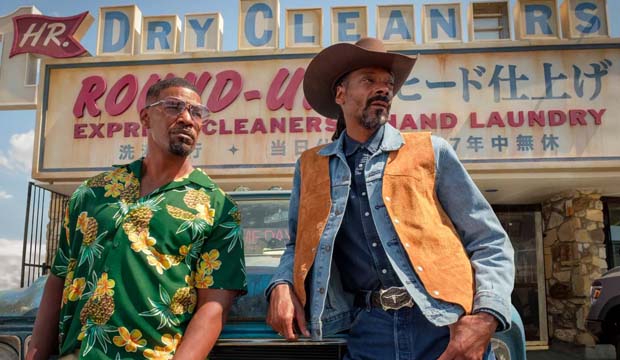 On August 12, Netflix released ‘Day Shift’ starring Oscar winner Jamie Foxx along with Karla Souza, Dave Franco and Snoop Dogg. Foxx plays Bud Jablonski, as a man with a mundane job that fronts for his real source of income, hunting and killing vampires as part of an international union of vampire hunters. The film currently holds a not-so-fresh rating of 58% at Rotten Tomatoes, but what exactly did the critics think?

Stephanie Zacharek of Time Magazine praises the movie’s lead, stating Foxx’s film “has three things going for it, the first being its jaunty spirit and its reckless disregard for making any sense whatsoever. OK, maybe that’s two things, but you get the drift.” In the end, the film delivers on what it promised. “Foxx goes above and beyond the call of duty, seemingly without even trying.”

Vincent Mancini of Uproxx begins by stating that he is “not going to tell you that Day Shift will make waves come awards season or that you’ll still be thinking about it months from now, but it feels far closer to what the makers of Bullet Train, Gray Man, Nobody, et. al. were going for than any of those movies.” He continues, “Day Shift‘s writing is inventive where most movies like this are merely tedious; its fight choreography stylized where most movies like this are merely competent (B-movie action master Scott Adkins even shows up in a minor role).”

Matt Zoller Seitz of RogerEbert.com begins by calling the film the type “that you talk back to, in excitement, fright, or amusement, or because it did something corny or dumb and you can feel that everyone around you recognizes it, too.” While the first half of the film is predictable, it “gets much more assured in the second half, when Bud and Audrey’s stories begin to intertwine, and it finds the right balance of goofy deadpan comedy, martial arts-inflected supernatural brawls, gunplay, car chases, and gore.” The whole cast is praised, but Snoop Dogg leaves a memorable impression. “His comic pitch is impeccable, and with his skinny frame and six-foot-four height, he looks magnificent in a ten-gallon hat and leather vests and dusters, like an animated cartoon version of an Old West gunfighter.”

Other critics were less impressed. Brian Lowry of CNN begins by stating the film is “the kind of star-driven vehicle that yields obvious benefits to Netflix even if, qualitatively speaking, it doesn’t deserve to see the light of day.” Not only do the action scenes become tiresome but the villain is “pretty ho-hum as such threats go.” He adds, “Yet while this form of escapism might yield bottom-line dividends thanks to the combination of premise and star, this is the sort of lifeless effort where the prudent advice would be not to quit your day jobs.”

Tim Robey of Daily Telegraph (UK) begins with the headline that the “Jamie Foxx vehicle takes the promising premise of LA being silently overrun by bloodsuckers and fails to exploit it.” He continues, “The idea that Greater Los Angeles is overrun by bloodsuckers and no one has a clue – except a secret society of these mercenary Van Helsings – powers the film up with a certain amount of (alas, untapped) potential.” Saying that, the film suffers from comedy that does not quite land and poor casting. “It doesn’t help that Bud’s unwanted sidekick, a union jobsworth called Seth with a habit of wetting himself, is played by a miscast Dave Franco: the role feels very Michael Cera circa 2010, and needed someone with weirder comic timing.” In the end, Robey does not seem to find enough in the film to recommend it to viewers.

Meagan Navarro of Bloody Disgusting starts by calling the film “a horror comedy that’s heavy on style and action spectacle… but slight on substance and laughs.” The script is so quickly paced “that nothing has the time or room to develop beyond its action sequences.” Furthermore, “A significant third-act set piece also visually teases a history that’s never explored.” In the end, the film is “a serviceable but ultimately forgettable romp.”

Have YOU watched “Day Shift”? Tell us in the comments if the film was a bloody good time or needed a blood transfusion.