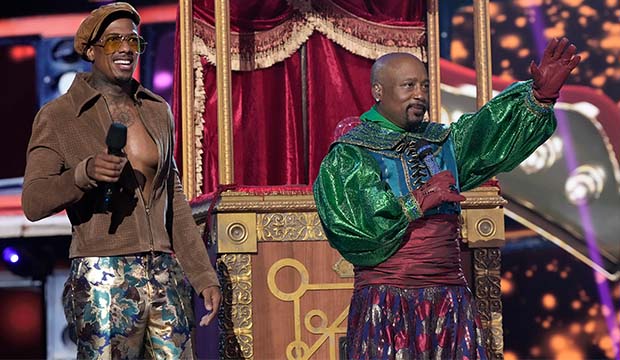 FUBU founder, entrepreneur and “Shark Tank” star Daymond John shocked most viewers when he popped out of the Fortune Teller costume on “The Masked Singer” Wednesday night. To everyone’s surprise, it was the perpetually incorrect panelist Ken Jeong who was able to decipher the clues first.

“It is such an honor to be here,” John told Nick Cannon during his unmasked interview.

“I used to go to the back office of FUBU and beg for clothes,” Cannon interrupted. “I had FUBU everything!”

“Did you know who it was, Nick?” asked panelist Jenny McCarthy. Cannon then responded, “At first I didn’t and then when I actually got to see him walk I was like, ‘Oh I know who that is.’ But when he was in there I had no idea. The performance threw me off and everything.”

For his “TV Theme Night” performance, John chose to sing “Movin’ on Up” from “The Jeffersons.” “As a young man growing up, as a person of color, I didn’t get to see people that looked like me on TV that didn’t have anything to do with music or sports. But being a short guy and moving up to the east side of New York, George Jefferson made me want to become a shark.”

In his clue package we learned that Fortune Teller grew up in Queens, New York and had visions of being a big music king. He wasn’t the best singer so he tried to make it as a dancer. With the help of his mother, he figured out a unique way to make it in the industry. Soon, everyone wanted a “dash” of him in their music videos. Then, an unusual offer came in while he was “Keeping Up With the Kardashians.” If it wasn’t for them, he might have missed out. The kid from Queens was able to move on up.

Fortune Teller was the seventh act eliminated from Season 8 of “The Masked Singer.” His unmasking was preceded by William Shatner as Knight, Eric Idle as Hedgehog, Chris Kirkpatrick as Hummingbird, Jeff Dunham as Pi-Rat, Montell Jordan as Panther and “The Brady Bunch Brothers” as Mummies.