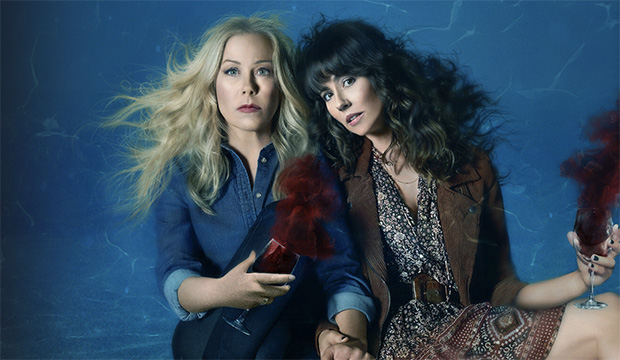 After a two-and-a-half-year hiatus, “Dead to Me” finally returned to Netflix with its highly anticipated third and final season on November 17. This means its two leads, Christina Applegate and Linda Cardellini, are eligible for the upcoming 29th Screen Actors Guild Awards — for which voting began on December 5 and ends on January 8 — and have one last shot at being recognized for their work on the show. But how alive are their nomination chances after sitting out last year’s cycle?

The new episodes pick up right after the wild events of the Season 2 finale, which ended with Jen and Judy (Applegate and Cardellini) getting into a car accident caused by Ben (James Marsden), who got inebriated after learning his identical twin brother Steve had died. Season 3 finds the best pals trying to untangle a variety of conspiratorial knots while staying one step ahead of the authorities and also dealing with an unexpected health crisis. The 10-episode final installment continues the dark comedy’s tradition of mixing sharp humor with a deep exploration of trauma and loss, with Applegate and Cardellini once again excelling as their respective characters, peeling back new layers as the onscreen duo is forced to navigate new levels of grief and deception.

Of the two leads, the highest ranked in our Best Comedy TV Actress odds at the moment is Applegate, who currently sits in seventh place. But that’s not surprising. The “Samantha Who?” alum has pocketed a total of six SAG Awards bids, including three for “Dead to Me” — two for her individual work (2020-21) and one as a member of the show’s ensemble (2021) — and made the cut for Season 1 when the Netflix series was otherwise shut out.

It’s clear that Applegate’s peers in SAG-AFTRA have taken a strong liking to her turn as Jen, and there’s no reason they shouldn’t be as impressed as ever by the actor’s emotionally complex performance in Season 3, which she notably pulled off while battling multiple sclerosis off screen.

Cardellini is only a few spots behind her co-star in our odds, in 10th place, and would probably trail her more closely had she not missed out on a nomination for Season 1. The good news for the three-time nominee is that her omission was likely due to the show taking a while to catch on with voters and her not having the same level of name recognition as Applegate to compensate for the dark comedy’s lack of visibility at the time. But ever since she landed an Emmy citation alongside Applegate for Season 2, the two actors have come as a package deal at every turn, including the 27th SAG Awards in 2021 where they earned bids for Comedy Actress and Comedy Ensemble, and it’s hard to believe this trend would be discontinued right as the show enters its home stretch on the awards circuit. (Cardellini’s third SAG Award bid was as part of the “Brokeback Mountain” ensemble.)

In Season 3, Cardellini has plenty of juicy material with which to work as Judy grapples with life-altering news, which we won’t spoil here. The actress gives a heart-wrenching, unforgettable performance that is very much worthy of equal praise as her co-lead’s formidable work.

Even though the co-stars face stiff competition in their race — including a host of women from “Abbott Elementary” (Quinta Brunson, Janelle James and Sheryl Lee Ralph) and “Hacks” (Hannah Einbeinder and reigning champ Jean Smart), who presently make up the Top 5 in our odds — they have the recency of “Dead to Me’s” third season on their side. The installment, which was well watched following its release, will likely be one of the last eligible TV seasons members of the nominating committee consume before handing in their ballots, and given the note on which it ends, will not be one they’ll be able to shake shortly upon viewing.

So, yes, Applegate and Cardellini’s nomination chances are very much alive and, if voters do the right thing, their winning chances might be so as well.