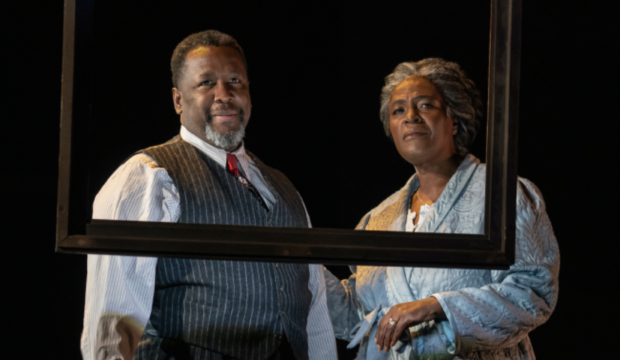 Attention must be paid to the latest revival of Arthur Miller’s classic American family drama “Death of a Salesman,” which opened on Broadway at the Hudson Theatre on Oct. 9. Wendell Pierce takes on the formidable role of the salesman Willy Loman, and last-year’s Tony nominee Sharon D Clarke joins him as Willy’s wife Linda. Unlike any prior production of the show on Broadway, this Loman family is portrayed by Black actors.

Director Miranda Cromwell helms this “Salesman,” which originated in the UK. That production was co-directed by Marianne Elliott — who just won a Tony this year for her revival of “Company” — and earned five Olivier Award nominations in 2020, winning for director and actress for Clarke. Stateside, the Loman family is rounded out by André De Shields as Willy’s brother Ben, and Khris Davis and McKinley Belcher III as Willy’s sons Biff and Happy.

Most critics raved about this latest take on Miller’s most famous tragedy. Jesse Green (New York Times) names this production a Critic’s Pick, calling it “notably rich” and “astonishing.” He heaps praise on the performers, calling Pierce “wrenching as he flails and fails to avoid his fate instead of slumping into it from the start,” Clarke “so paradoxically shattering,” and De Shields “terrifying” because he “makes every utterance sound like an elaborate curse.” Despite all this praise, Green does note that Cromwell’s direction sometimes feels “obvious and unmoored.”

Lester Fabian Brathwaite (Entertainment Weekly) give the production an A- grade, describing it as “vital” and featuring “kinetic direction” from Cromwell. He lauds the “sensational” Pierce and Clarke, saying Pierce is “the beating pulse at the show’s center, delivering monologues with a rapid dexterity that erupts into chaotic confusion,” while “Clarke gives dignity and dimension to a character confined to the house.” Of the featured cast members, Brathwaite singles out the “perfectly cast” De Shields, but is less enamored with Davis’ performance as Biff. As for the production showcasing a Black Loman family, he says that it is somewhat of a “missed opportunity to further explore for whom The American Dream was truly meant.”

SEE ‘Into the Woods’ revival is ‘radiant’ and ‘superb,’ but will it compete at the 2023 Tony Awards?

Rob Weinert-Kendt (Vulture) offers a similar take on the merits and shortcoming of this “Salesman.” Overall, he calls this mounting a “stunning” revival against which subsequent productions will be measured. He applauds Pierce as “devastating” and Clark as “unshakable,” and offers kudos to Davis and Belcher III. As others wrote, though, he comments that occasionally “Cromwell’s stylizations go a bit too hard, honestly.”

At this early moment in the 2022-2023 season, “Death of a Salesman” looks like a strong Tony Awards contender. This new interpretation of Miller’s popular drama kicks off a very strong slate of revivals, which includes August Wilson’s “The Piano Lesson,” Suzan-Lori Parks’ “Topdog / Underdog,” plus potentially Adrienne Kennedy’s “Ohio State Murders” and Stephen Adly Guirgis’ “Between Riverside and Crazy,” depending on whether the latter two are deemed revivals under the classics rule. Assuming all five of these productions compete as revivals, the category will have no more than four slots, and it seems likely that “Salesman” will make the cut.

So, too, will the show’s powerhouse lead performances. For “Salesman,” Pierce returns to Broadway as an actor for the first time in over 30 years in a performance sure to net him his first Tony nomination as a performer; he has one win from two nominations as a producer. Fresh off of her Olivier victory and a strong bid for her first Tony last year for musical “Caroline, or Change,” Clarke should secure her second consecutive Tony bid, too.

From the featured cast, look out for a nomination for De Shields. A beloved stage veteran and recent Tony winner for “Hadestown,” the showman has won over critics with his lively take on the small but utterly pivotal role of Willy’s deceased elder brother Ben. While Biff has historically been the attention-grabbing part, De Shields seems to have upstaged the other featured performers.

With so many plays and revivals opening and yet to be announced for this season, it is too early to say whether Miranda Cromwell will crack the Director line-up. Despite the overall praise for “Salesman,” many found certain aspects of this production heavy-handed, and that little hesitation could keep her out of a competitive race. From the production design, look out for last year’s Tony nominees Anna Fleischle in scenic design and Mikaal Sulaiman in sound design — this production incorporates a lot of music, which will leap out at nominators.

SEE 2022 Broadway fall season preview of plays: ‘Death of a Salesman,’ ‘The Piano Lesson’ and more

As a towering work of American drama, “Death of a Salesman” already has a storied history with the Tony Awards. The original production earned six nominations for Best Play, Best Featured Actor (Arthur Kennedy), Best Scenic Design, Best Director, Author, and Producer; it also won the Pulitzer Prize for Drama. The 1975 production earned a single bid for Best Actor for George C. Scott, while the 1984 production was also nominated for one award for Best Reproduction and won. In 1999, “Salesman” returned strong with six nominations, winning for Revival, Actor (Brian Dennehy), Featured Actress (Elizabeth Franz), and Direction. The show most recently played in 2012 in a production directed by the late Mike Nichols. That staging is to date the most nominated “Salesman” ever with seven bids, winning Revival and Direction; Philip Seymour Hoffman, Linda Emond, and Andrew Garfield were all nominated for their performances as Willy, Linda, and Biff, respectively.