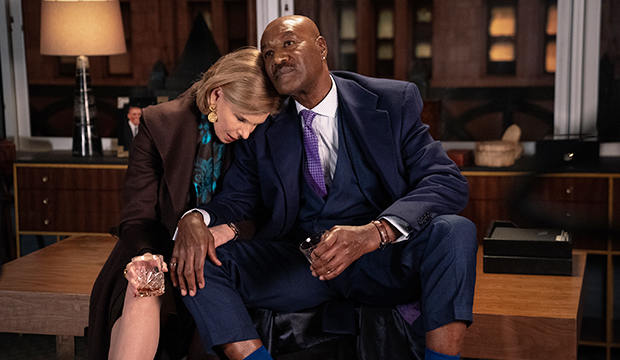 “I’m retiring,” announces Delroy Lindo’s attorney Adrian Boseman at the beginning of the terrific Season 5 premiere of “The Good Fight.” The revelation shocks Adrian’s colleagues, but fans of the Paramount+ series knew that Lindo had planned to depart the show at the end of the fourth season, an exit that was delayed due to the pandemic production shutdown. In his final appearance, though, Lindo brings his beloved character closure by delivering one of his best performances on the series.

The episode “Previously On…” covers a year in the life of the “Good Fight” characters as they respond to the beginning of the coronavirus pandemic through President Joe Biden’s election and the Jan. 6 insurrection. With 2024 already on the minds of the Democratic party, Adrian decides to leave the law to pursue a presidential bid. Teaming up with political operative Ruth Eastman (recurring guest Margo Martindale), Adrian plans to write a political memoir detailing 10 cases that demonstrate the ties between police brutality and systemic racism, but Ruth advises him to write a more politically friendly tome instead. He dismisses this charge, though, after he sees the footage of George Floyd’s murder in May 2020. Adrian’s impassioned response to the event and his dressing down of the cold, calculating Ruth, saying that “giving into anger is the only sane response” to Floyd’s death, is visceral, chilling and deeply moving.

Lindo also gets to explore Adrian’s complex personal life in the episode. The lockdown gives Adrian a chance to invite his girlfriend, judge Charlotte Hazelwood (Tamberla Perry), to shelter in place with him, but working from home leads him to accidentally overhear one of her Zoom calls in which she discusses her role in an ongoing conspiracy of judicial corruption. The information she reveals has a direct impact on a bribery charge facing one of his colleagues, so after very careful consideration he passes along what he knows to Diane Lockhart (Christine Baranski), putting himself in Charlotte’s crosshairs. Lindo wears this tension between his professional ethics and his love for Charlotte all over his face as he pleads with her to stay with him and then warns her to reform herself before she destroys her career. He plays Adrian’s sorrow at the end of the relationship devastatingly, and in a way that demonstrates his impressive range just scenes after his righteous indignation over Floyd’s murder.

If the episode seems heavy, writers Robert and Michelle King also find room for their trademark humor. Leaving the office with Diane late one night, Adrian almost falls down an empty elevator shaft in an absurd and hilarious reference to how “L.A. Law” wrote off actress Diana Muldaur. Lindo’s real final scene is ultimately quite beautiful as Adrian embraces Diane — their friendship and Lindo’s chemistry with Baranski have been series highlights since the first episode — and offers parting advice to Liz (Audra McDonald) before lovingly caressing her face. Fans could not have hoped for more from Lindo’s sign-off.

SEE Emmy spotlight: Legend Elaine May deserves her first nomination for her pitch-perfect Ruth Bader Ginsburg on ‘The Good Fight’

A nomination for Lindo, which would also be his first career bid, for his final “Good Fight” episode would fittingly cap his time with the series. He has delivered awards-worthy performances throughout his run on the show, including standout episodes in the second and fourth seasons, but has never received recognition. Since he only appeared in one Season 5 episode, Lindo will compete this year in the Best Drama Guest Actor category, giving him one last bite at the Emmy apple for this role. Although he currently trails the top contenders, according to our current combined odds, he has an excellent submission with ample screen time and now contends in a category known for unexpected nominees. The only true consolation for Lindo leaving the series would be a long-overdue Emmy nomination.

PREDICTthe 2022 Emmy nominees by July 12
Emmy odds for Best Drama Guest Actor
Who will be nominated?