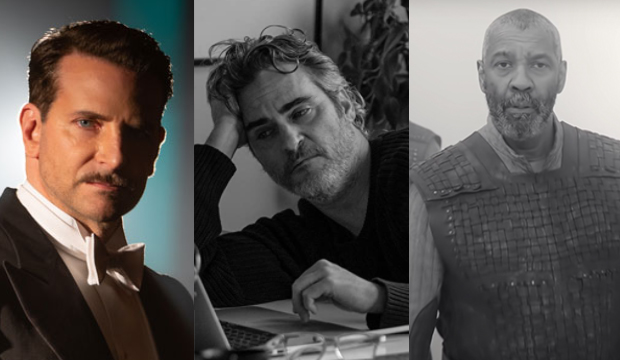 In 2013, four years before he announced his retirement from acting, Daniel Day-Lewis set a record with his Oscar victory for “Lincoln” by becoming the first three-time Best Actor champion. The last quartet of contenders he beat consisted of previous winner Denzel Washington (“Flight”), past nominee Joaquin Phoenix (“The Master”), and newcomers Bradley Cooper (“Silver Linings Playbook”) and Hugh Jackman (“Les Misérables”). With Day-Lewis now out of the picture, all but Jackman have emerged as hopefuls in the current Best Actor contest, creating the possibility of another three-way showdown.

According to our racetrack odds, the actor from this trio with the best shot at landing in this year’s lead lineup is Washington, who stars in Joel Coen’s “The Tragedy of Macbeth” and places fourth in our ranking. This would be his ninth acting nomination following supporting bids for “Cry Freedom” (1988) and “Glory” (1990) and lead ones for “Malcolm X” (1993), “The Hurricane” (2000), “Training Day” (2002), “Flight,” “Fences” (2017), and “Roman J. Israel, Esq.” (2018). Having triumphed for “Glory” and “Training Day,” he has a place in Oscars history as one of the six actors who have conquered both male categories alongside Robert De Niro, Gene Hackman, Jack Lemmon, Jack Nicholson, and Kevin Spacey.

Cooper, who stars in “Nightmare Alley” this year, is in ninth place. The film, helmed by 2018 Best Director winner Guillermo del Toro (“The Shape of Water”), is the second adaptation of William Lindsay Gresham’s novel of the same name after Edmund Goulding’s 1947 version. Cooper’s portrayal of a callous con artist could bring him his fifth acting nomination after three previous tries in the lead category for “Silver Linings Playbook,” “American Sniper” (2015), and “A Star Is Born” (2019) and one in supporting for “American Hustle” (2014). Having yet to win, he holds the distinction of being one of four living male actors with the most unsuccessful Oscar bids, along with Warren Beatty, Willem Dafoe, and Ed Harris.

Two years after winning the lead prize for “Joker,” Phoenix is back in the hunt as the star of “C’mon C’mon.” His performance, which has earned him a 13th place spot, was directed by Mike Mills, who led Christopher Plummer to a supporting win for “Beginners” a decade ago. Mills’s new film is yet another semi-autobiographical effort that focuses on the relationship between an unassuming radio journalist (Phoenix) and his precocious nephew (Woody Norman). Prior to his recent triumph, Phoenix vied for the 2001 supporting and 2006 lead trophies with his roles in “Gladiator” and “Walk the Line” before losing to Day-Lewis in 2013.

In addition to facing Cooper and Phoenix again, Washington could end up in rematches with three other past competitors. The most likely showdown will pit him against “King Richard” star Will Smith, who is the current leader of the Best Actor pack by our odds and lost as the star of “Ali” to Washington in 2002. Smith might also be challenged for a second time by seventh place runner Leonardo DiCaprio (“Don’t Look Up”), who he first went up against in 2007. Their respective performances in “The Pursuit of Happyness” and “Blood Diamond” were bested by that of Forest Whitaker in “The Last King of Scotland.”

Five years ago, Washington (“Fences”) and Andrew Garfield (“Hacksaw Ridge”) were among those who lost Best Actor to Casey Affleck (“Manchester by the Sea”). Now, Garfield’s performance in “tick, tick… BOOM!” has him in third place in the present race. There is also an outside chance that Washington could again face Timothée Chalamet, whose work in “Dune” puts him in 11th place. His performance in “Call Me By Your Name” was nominated against Washington’s in “Roman J. Israel, Esq.” four years ago, when Gary Oldman (“Darkest Hour”) was crowned the winner.

The upcoming Best Actor lineup could also feature a second showdown between Cooper and Benedict Cumberbatch, who was last recognized in 2015 for his starring role in “The Imitation Game.” They were both defeated in that case by Eddie Redmayne (“The Theory of Everything”). Cumberbatch, who now stars in the Western drama “The Power of the Dog,” is running second in our race.

In fifth place is potential Oscar newcomer Peter Dinklage (“Cyrano”), who racked up four Primetime Emmys during his eight-season tenure on “Game of Thrones.” Besides DiCaprio, those that rank between him and Cooper are Javier Bardem (“Being the Ricardos,” sixth) and Nicolas Cage (“Pig,” eighth). Other than Chalamet, the two behind Cooper and ahead of Phoenix are Simon Rex (“Red Rocket,” 10th) and Clifton Collins Jr. (“Jockey,” 12th).