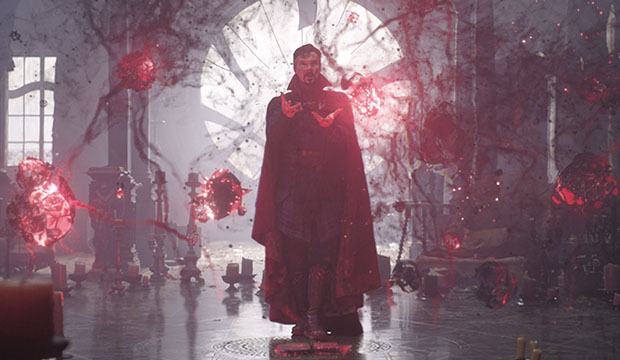 The visual effects in Marvel’s Disney+ series “She-Hulk: Attorney at Law” have, uh, not been warmly received, but maybe if the legal comedy had featured Benedict Cumberbatch’s Doctor Strange instead of Benedict Wong’s fan-favorite sorcerer Wong, things might be different. The character seems to be something of a secret weapon for the Marvel Cinematic Universe, which could bode well for Sam Raimi’s “Doctor Strange in the Multiverse of Madness” at the Oscars.

Since Cumberbatch first suited up (cloaked up?) as Dr. Stephen Strange in the character’s origin story “Doctor Strange” (2016), nearly every Marvel film the neurosurgeon-turned-Master of the Mystic Arts has appeared in has gone on to be nominated for Best Visual Effects at the Oscars. In addition to that first solo film, the massive team-up films “Avengers: Infinity War” (2018) and “Avengers: Endgame” (2019) — in which Doctor Strange was just one of many superheroes trying to stop Thanos (Josh Brolin) — and the Peter Parker extravaganza that was “Spider-Man: No Way Home” (2021) were all nominated.

The lone post-2016 MCU movie in which Doctor Strange appears that was not nominated for the visual effects Oscar is 2017’s “Thor: Ragnarok.” Although the Taika Waititi film is one of the best and most memorable installments of the ever-expanding MCU, voters have never nominated a Thor film for visual effects, so its lack of a nomination is not wholly surprising. But it’s also possible that Doctor Strange’s three-and-a-half-minute scene opposite Thor (Chris Hemsworth) — a glorified cameo in which Strange tells Thor where to find his missing father (Anthony Hopkins) — just wasn’t enough time to properly show off the hallmarks of a classic Stephen Strange appearance (intricate spell work, some fun with the Cloak of Levitation, the freaky nature of the Mirror Dimension, etc.).

To put this wild and weird theory into perspective, here is the list of Marvel films that have been released since 2016 that do not feature Strange and also did not receive a VFX bid: “Spider-Man: Homecoming” (2017), “Black Panther” (2018), “Ant-Man and the Wasp” (2018), “Captain Marvel” (2019), “Spider-Man: Far From Home” (2019), “Black Widow” (2021) and “Eternals” (2021). Compare that to the films that did not feature Strange and still managed to sneak in: “Guardians of the Galaxy Vol. 2” (2017) and “Shang-Chi and the Legend of the Ten Rings” (2021). Based on this extremely scientific study, it would appear that Marvel does tend to be more successful when Cumberbatch swings by, so it would be smart not to underestimate him this year.

“Doctor Strange in the Multiverse of Madness,” which also featured Elizabeth Olsen as Scarlet Witch and showcased some of the most creatively interesting visuals in the whole of the MCU, was shortlisted by the Visual Effects Branch Executive Committee (“Thor: Love and Thunder,” on the other hand, did not make the cut). It currently sits in fifth place at 11/1 odds to pick up yet another VFX nomination for Marvel. The multiversal adventure, which was darker than most Marvel films and featured nods to horror, trails frontrunners “Avatar: The Way of Water” (first place, 16/5 odds) and “Top Gun: Maverick” (second, 4/1), as well as fellow comic book films “Black Panther: Wakanda Forever” (third, 11/2) and “The Batman” (fourth, 17/2). Rounding out the rest of the shortlisted field are “Nope” (sixth, 14/1), “All Quiet on the Western Front” (seventh, 37/1), “Thirteen Lives” (eighth, 54/1), “Jurassic World: Dominion” (ninth, 64/1) and “Fantastic Beasts: The Secrets of Dumbledore” (10th, 100/1).

While one might be able to pick out other reasons for Marvel’s VFX success at the Oscars, one thing is clear: It’s better to have Doctor Strange than not. Of course, that probably rings true for the entirety of the MCU, not just this very specific situation.

PREDICTthe 2023 Oscar nominees by Jan. 24
Oscar odds for Best Visual Effects
Who will be nominated?