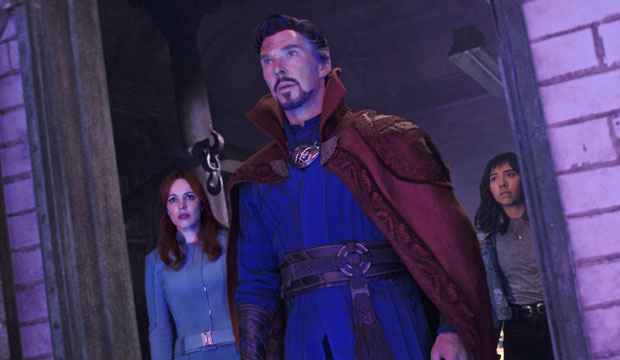 Not every comic book or superhero movie warrants the call for awards in the same way that last year’s “Spider-Man: No Way Home” did. That felt like such a huge game-changer in terms of being a turnaround for a box office that was previously thought dead due to the effects of the pandemic.

“Doctor Strange in the Multiverse of Madness” starring Benedict Cumberbatch is well on its way to becoming the highest-grossing movie of 2022 after just a few weeks, having crossed $300 million domestically and $700 million globally. Much of that business may have come from the idea that it continues some of the “multiversal” ideas that played such a large part in “No Way Home.” But can it overcome the Oscars’ superhero stigma?

The film is actually more of a continuation of the Emmy-winning “WandaVision” limited series on Disney+. That won three Primetime Emmys last year – one for costumes, one for the song “Agatha All Along,” and one for Mark Worthington‘s production design. In some ways, it seems like the Television Academy is far more open to nominating and giving awards to superhero shows. Another good example is the Best Drama Series nomination for Amazon’s “The Boys”

“Doctor Strange” is also significant in that it returns director Sam Raimi to superhero movies for the first time since his “Spider-Man” trilogy, which ran between 2002 and 2007. Tobey Maguire, the Spider-Man from those movies, returned for “No Way Home,” which helped add to the excitement. As we already know, fan service isn’t enough to warrant a movie receives Oscars or other awards nomination, but in some respects, maybe “Multiverse of Madness” should be taken more seriously?

We probably should start with the one craft awards nomination that seems like a given, and that’s visual effects. The original “Doctor Strange” was nominated for visual effects in 2017, but that ended up losing to Disney’s “The Jungle Book.” The VFX in “Multiverse of Madness” are equally as impressive, and we’ll have to see what kind of competition it might have if nominated, although another superhero movie, “The Batman,” could also be in that mix.

Another interesting category that seems custom-made for superhero movies (and period dramas) is Costume Design. The wardrobe designed by Graham Churchyard is particularly compelling in a similar way as “Black Panther,” which won an Oscar for Ruth E. Carter in that very category. This entailed a lot of different incarnations of costumes for Doctor Strange and other characters, though I’m not quite sure they’re quite as impressive as Carter’s mix of tribal garb with the usual spandex.

Production design tends to be of similar importance for comic book movies, and the work for “Multiverse of Madness” done by Charles Wood is pretty impressive. Wood has already shared an ADG (Art Directors Guild) award win for “Guardians of the Galaxy” and “Avengers: Endgame” and was one of the ADG nominees for his work on the original “Doctor Strange.”

Also significant is the cinematography by John Mathieson, a two-time Oscar nominee for Ridley Scott’s “Gladiator” and “The Phantom of the Opera” a few years later, mainly due to the way it integrates with some of the other crafts above.

There’s been quite a bit of chatter about what Raimi’s direction brings to “Multiverse of Madness,” and this might be hard to believe, but Raimi has never been nominated for a single Oscar in any category – not one. (Seems to me like he’s destined to receive a Governors Award sometime in his future.)

While Cumberbatch is coming off his own second Oscar nomination for “Power of the Dog,” I’m dubious of him being in any sort of consideration for another one for “Doctor Strange,” but Elizabeth Olsen’s next (and possibly last?) turn as Wanda Maximoff/Scarlet Witch is significant enough that I could see her being considered for Supporting Actress if the category is lighter than usual.

Unfortunately, there isn’t a ton of hope for “Doctor Strange in the Multiverse of Madness” to be considered for Best Picture in the same way as “Spider-Man: No Way Home” was this year, just because it hasn’t been received as well as other Marvel movies. It did get enough positive reviews to be 74% Fresh on Rotten Tomatoes, but that’s significantly less than some of Marvel’s other big movies.

As with any of these examinations of a movie’s awards potential, we have to remember that there’s still seven and a half more months to the year in terms of eligibility, and lots of other great movies to come. Some of these earlier releases might be forgotten by year’s end, even if the guilds have more room to nominate crafts than the Oscars themselves.