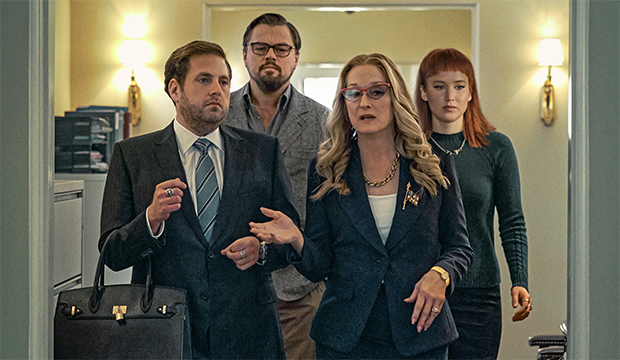 Adam McKay has followed up his award-winning films “The Big Short” and “Vice” with “Don’t Look Up,” a shamelessly direct allegory of our global climate crisis presented. This sharp socio-political satire stars Leonardo DiCaprio and Jennifer Lawrence as low-level astronomers who discover a deadly comet hurtling toward earth. They try in vain to warn the President of the United States (played by Meryl Streep), her foolhardy administration (embodied by the president’s son, played by Jonah Hill), and cable news talking heads (Cate Blanchett and Tyler Perry) about the coming end of humanity. Others in the cast include Timothee Chalamet, Ariana Grande and Mark Rylance.

Despite the polarising critical response (the film sits at a sharply divided 55% rating on Rotten Tomatoes), it performed spectacularly well following its release onto Netflix over Christmas. In its first seven days, “Don’t Look Up” was viewed for 263 million hours worldwide (already the 3rd highest of all time). And it boasts a far more appetising 78% fresh audience score on RT, with an average rating of 4/5).

That bodes well for the cast at the SAG Awards. Previous star-studded affairs to reap SAG ensemble bids include “Bobby” and “The Butler,” which both had similarly mild critical receptions. Beyond that, several of the actors could be singled out for individual nominations.

DiCaprio, who has one win from six individual nominations, currently sits in 6th place in our combined odds. He plays against-type as an uncool middle-aged man and dorky father of two adult children.He has a memorable moment reminiscent of Peter Finch in “Network” (Finch won an Oscar in 1977 for his fiery portrayal of Howard Beale) in which he descends into a raging, emotionally explosive rant on live television. It’s one of those classic “Oscar clip” moments that voters remember when filling out their ballots.

Streep is 10th in our combined odds for her featured role as president Janie Orlean, one of the films many soullessly self-centred villains.. The guild has a reputation for “name-checking” nominees.  She already has a record 16 SAG nominations for film.

Lawrence (15th in our combined odds) is flying under-the-radar for her lively turn as outspoken Michigan State PHD candidate Kate Dibiasky. She took a break from Hollywood and “Don’t Look Up” marks her highly anticipated return to the big screen. She too has an “Oscar clip” moment in which Kate also has a meltdown on live television. But Lawrence’s moment is unique in its startling poignance.

The film’s final contender is Hill (21st in our combined odds). Contrary to popular opinion, I regard him as the film’s biggest threat in this year’s supporting actor race. He plays Jason Orlean, the spoilt child of the president and her chief of staff. Unlike his rival Rylance, he shares all of his key scenes with the lead characters. His scene-stealing improvisational prowess is difficult to ignore. And he has been the one campaigning with multiple appearances on TV talk shows during voting.